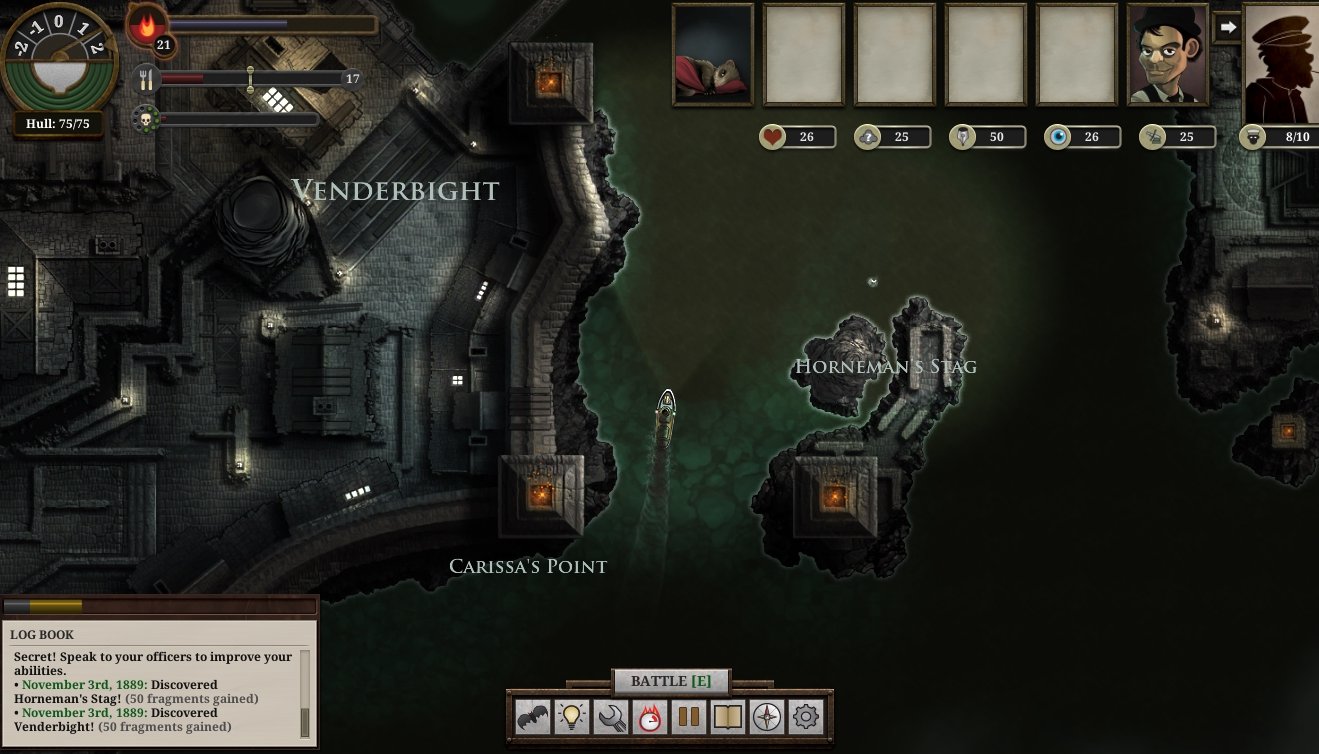 Lose your mind. Eat your crew.

Sunless Sea was quite an ambitious project for Failbetter Games – both fairly original (or at least a less common configuration of familiar elements: Fallen London setting, gameplay inspired by Sid Meier’s Pirates! and roguelike elements) and considerably different from the team’s usual output. Instead of a text-based adventure set on the streets of London or Karakorum, Sunless Sea is all about sailing the underground waters, trading goods between different ports and fighting against threats from both people and monsters. 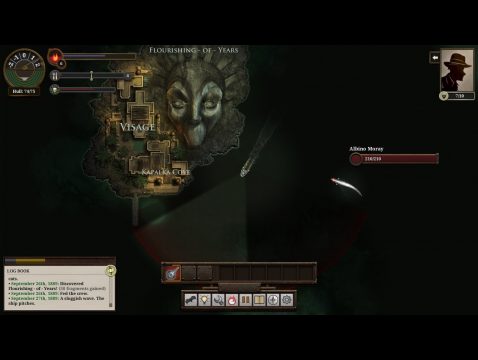 Sunless Sea is an exploration-heavy game. You start in London with an empty map and have to find your way to all the ports, islands and wrecks of the underworld. While the continents don’t change their positions, everything at sea does. There are some general rules about the island placement – e.g. Gaider’s Mourn will always be fairly close to London while Frostfound will always be far to the North – but discovering their exact locations is up to you. Finding things on the map is rewarded with Fragments – earn enough of them and you’ll gain a useful Secret. London’s admiralty office will also pay you for reporting on the activities in different ports – and to keep you from from grinding endlessly, the rewards keep getting smaller unless you bring them something new.

Exploring the sea is not an easy task, as you have to manage several resources: Your crew consumes supplies but is needed to operate the ship – have less than half of the ship’s maximum and you won’t be able to got at full speed; have less than a quarter and you gain more terror; have none and you die. Hull integrity keeps the ship afloat, light reduces the rate at which terror increases but attracts monster and uses fuel, fuel and supplies take hold space that is also needed for cargo and passengers, and the more terror you get, the more dangerous random events will happen. Better engines make ships go faster while using more fuel, but speed is also affected by the weight of the ship – putting an old engine into a merchant ship is a good way to slow everything down to a crawl.

Sailors are often in danger of being attacked by pirates or “zee-beasts” – monsters ranging from giant crabs and swarms of bats to living icebergs and islands. Combat is done by moving the ship so that the enemy comes into its range (which depends on weapons used by the player), waiting until the crew works out the firing solution (which can be sped up by using flares) and clicking the weapon’s button with a mouse. Monsters will attempt to ram your boat while the enemy ships try to position themselves in a way that allows them to attack, as they also have limited range. In theory, it means that combat requires careful positioning and well thought-out movements, but in practice it’s rather clunky and the waste of fuel and hull integrity outweighs the rewards so it’s usually better to simply turn off the lights, set engines to full power and run away. 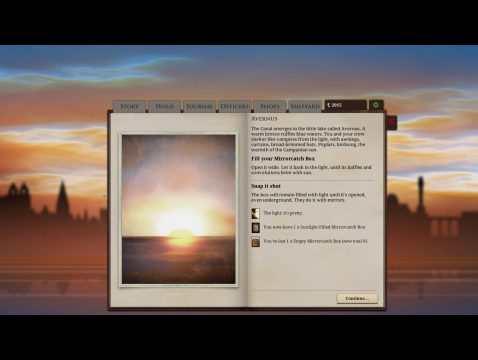 While Fallen London was a darkly humorous game with lovecraftian undertones, Sunless Sea goes for a more overtly unsettling atmosphere. Death in Sunless Sea is a real risk throughout the game and – somewhat contrary to Fallen London lore – it’s permanent. The characters are often on the verge of madness, starvation or both, and the game is not afraid of showing the horrifying consequences. The resource-oriented nature adds to the atmosphere: losing a game is often less of a violent death and more of a drawn-out agony as the ship gets damaged, supplies and fuel run out and terror and hunger increase.

But despite the change in tone, Sunless Sea is not devoid of what made Failbetter’s other games popular: the excellent writing. When arriving at a port, you are presented with its description and given a few choices for adventuring. Those can have an effect on the aforementioned cargo and resources, but they also change your character’s qualities, which work more or less the same way as in Fallen London. This time the narrative is focused mostly on different places beneath the Earth. It could even be argued that those places – not the protagonist and his officers – are the game’s real stars: The Empire of Hands where the talking apes are imprisoned, Pigmote Isle where guinea pigs fight a war against rats, the Iron Republic where ‘time slips sideways’ and citizens ‘have heads of dogs and serpents’. The imagination of the developers when it comes to creating fascinating locations is really exceptional. 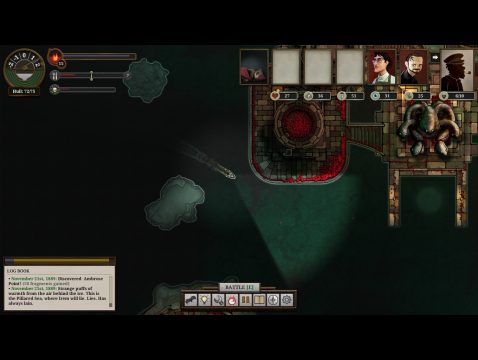 The art direction of some islands is pretty great, but more often than not you’ll be looking at a ship, a lot of dark water and maybe some fog or snow effects. The ports and events use static images, which are pretty cool but one cannot help but notice that some of them are lifted directly form Fallen London, sometimes confusingly applied to completely different concepts and characters. Sunless Sea is not the most graphically impressive game – both from technical and from artistic standpoint – but the graphics fit the setting and don’t break immersion.

Music and sound, on the other hand, are brilliant. On the open sea, the game plays only sounds of the water but as you approach a port, its theme music starts to play and gets gradually louder as you get closer. There is also special music related to terror, which gets louder as it increases. All the tracks are very memorable and fit the places they’re associated with perfectly – after a few hours of playing, it becomes nearly impossible not to feel relieved when hearing the London music or whistle the surface theme as you go up the Cumean Canal. 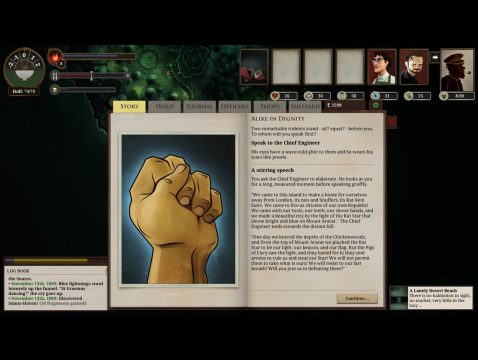 Technically, Sunless Sea is a decent game without too many bugs. There are some annoying interface inconsistencies here and there (e.g. some items can be bought or sold in a bulk through the shop tab while others need to be purchased through event choices one at a time – even if said event choice is guaranteed to be available at certain ports), but overall the game is intuitive and fairly easy to learn.

The real problems with the game stem from some of the game design choices. As always with Failbetter, there’s quite a lot of grinding to do. While the developers actually put in some countermeasures this time by nerfing trade routes and making it easier to make money through events that can’t be repeated endlessly, there’s still an annoying need to sail back and forth delivering sphinxstone and coffee, as every upgrade worth buying is very expensive. The tedium could be reduced by buying a merchant ship – but that’s a catch 22, as the merchant ship itself is very expensive. Building up statistics is slow and usually requires spending Secrets, of which you won’t get too many – but the events often demand high stats in order to succeed. Worst of all, Sunless Sea expects you to grind across multiple games – unlike in traditional roguelikes, collecting certain items and performing specific actions will make your next character better (there is some risk vs reward when inheriting maps, as it makes gaining secrets harder but otherwise legacies simply improve character). It’s quite annoying as the game basically expects you to die multiple times and get better not by learning the game but by grinding and unlocking.

According to the lead designer, most of the game’s problems can be blamed on the team’s inability to choose between a roguelike and RPG. It makes sense – the game is not random enough to offer a different experience each time you play (the islands will be located in different places but they’re always the same islands with the same stories), it’s not open-ended enough to accommodate different playstyles and its world is too small to be a proper RPG. There are officers in Sunless Sea who work sort of like recruitable NPCs in RPGs, with their own quests and possible romance subplots for some – but their personalities are kept simple and they never interact with each other. Thus, most of them feel less like characters and more like pieces of equipment with sidequests attached. You can pick your own victory condition by choosing an ambition at the start or finding a hidden one, but most of those main quests are pretty short, only padded artificially by requiring large amounts of items, stories and qualities – the one related to writing “Zong of the Zee” is probably the worst, as it requires buying all upgrades from the study and collecting insane amounts of stories and secrets.

Sunless Sea is definitely the best of Failbetter’s games and the first hours of playing are really good fun. Unfortunately, tedium can set in rather quickly when you realize that it’s still not free from overly repetitive actions, the ship’s slow speed is there mostly to mask the game world’s small size and the roguelike elements are just a gimmick – and a pretty overused one at that. Sunless Sea has great atmosphere and memorable moments, but as a whole it still feels lacking. It’s a big improvement over Failbetter’s earlier games though, so maybe there is hope for a game set in the world of Fallen London that is consistently fun to play.