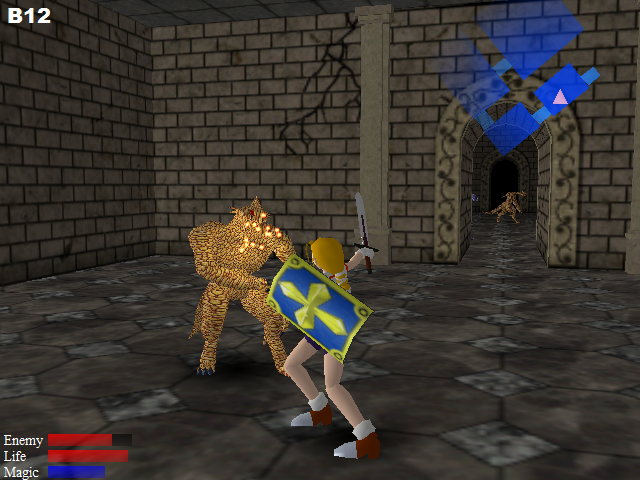 Western PC gamers of the late 1990s, you thought you had it bad with all those incompetent Diablo clones? You don’t know what your Japanese comrades got. Take for example Midgard, which has nothing at all to do with Norse mythology, but everything with crawling through bland, random dungeons to amass bland, random loot, which allows you to go deeper into the dungeon for yet more loot.

From the character select screen, Midgard already looks more progressive than Diablo, because you can select your character’s class and gender separately. Armor changes are not shown on the character models, though, so you’d have to be content with running around in swimsuit armor all the time for half of the female classes. It’s also possible to change the class (but not the gender) during the game, but that’s about the only part where the game is one step ahead. The five classes all can use different equipment and have different attacks, but everyone who’s not the fighter is rather pathetic. It’s still worth to change the class for a few levels to build up some magic proficiency, because after you find the healing spell, you never have to die again. Not that it matters, though – there is no apparent penalty for dying, which means that it’s simply the quickest way to get back into town.

Just like Diablo, the hero starts in a small settlement, but this one is positively creepy, always surrounded by thick fog that makes it impossible to see past a few yards. There are a few blocky houses which all look the same, but only two can be entered – the shop to buy, sell and identify equipment, and the bar to change the character class. The town is surrounded by nothing but two-dimensional trees, and after a while, the floor just ends sharp. Once you get over the horror of being trapped inside this uncanny valley, all that’s left is to head for the dungeon, which is accessed through the local church, because of course that’s where all gateways to hell can be found. Brace yourself for the loading screen, the single most entertaining part of the entire game: 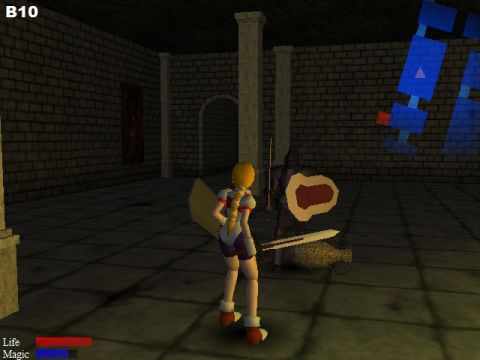 The inherent problem with Diablo-styled randomized dungeons is that you don’t really get the advertised “infinite dungeons”, but rather just one amorphous conglomerate of mostly featureless rooms haphazardly stuck together. In Midgard it’s worse than usual, though, as every single room is a perfect rectangle of varied size, connected by smaller perfect rectangles that form the corridors between them. There are only a few objects scattered around to distinguish them from another, like the barrels that every Diablo veteran is conditioned to smash for yet more loot, but here they’re entirely non-interactive. Everything is non-interactive, in fact, and the treasures are just lying around on the ground. For the first five floors, there’s absolutely no change in scenery. Only on the sixth the view changes from a catacomb look to a castle wallpaper, at least with changing light levels. After five more stages… another castle wallpaper!

Getting around is clunky and annoying. Being a ’90s third person game, Midgard of course uses tank controls, and it takes about five seconds to turn around 360 degrees the normal way. There is an instant turn maneuver, but it’s easy to accidentally do a backwards hop instead, and the way the camera swivels around is quite disorienting. Even the automatic turn-and-slash isn’t all that effective against some enemies who keep circling around you at a rapid speed just to annoy you. Combat is incredibly boring, as every class and weapon type has exactly one combo, with three hits tops (two-hit combos are the norm, though). Whether a hit connects or not might as well have been completely randomized. Unless they get you caught in an eternal stunlock-hit cycle in their midst (the most frequent cause of death by a wide margin is getting stuck somewhere), however, they all soon become completely harmless. No enemy ever follows you out of their designated room, so chipping away their health from the corridor, or even better throwing fireballs once you learn the spell, as they circle helplessly around the doorway, is always the most effective strategy.

All during the first five dungeon levels, you’ll see exactly five distinct enemy types with varying strength: Blobs and flying carnivorous pollywogs in many different colors, normal bats, sonar-shooting bats and skeletons. The one exciting new enemy type in stage 6-10 is a hooded, fireball-shooting skeleton whose head drops out of the hood when it is slain; also, many more colors for the blobs and pollywogs. Stage 11-15 get lizard men in two colors and golden blobs. Excited yet? If things get too boring (and they will), you don’t really have to fight any of them, because they are all so slow and confined to their rooms, and it’s easy to just run past everyone down the stairs to the next level. Until floor B5, where the stairs are blocked (no door – you just can’t go down) until you beat an overpowered knight who makes you recognize you actually did need to fight everyone on the way here – multiple times to get strong enough to take him on. The knight fight is repeated every five floors at least until B15, and surely you won’t blame us for not suffering this snorefest any longer beyond that? At any rate, the texture files for the game are plainly viewable bitmaps, and there don’t seem to be any textures for more dungeon walls, so if there’s anything past this third knight, it probably looks the same as what came before.