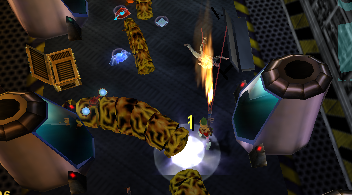 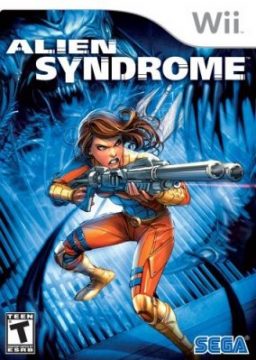 Despite the arguable lack of quality in the GBA versions of The Revenge of Shinobi and Altered Beast: Guardian of the Realms, Sega allowed yet another of their classic properties to be handled by a completely unrelated company. In this case, however, the developer is Totally Games. The same company was responsible for creating each installment of the venerable X-Wing and TIE Fighter PC/Mac series as well as the  WWII dogfighter, Secret Weapons Over Normandy. 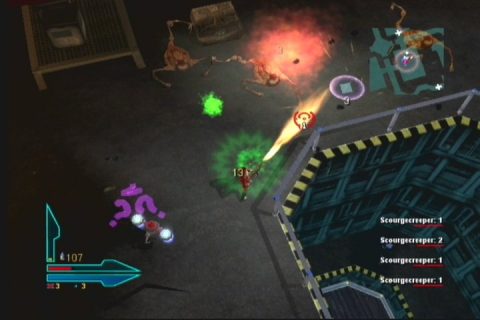 With this Alien Syndrome update, available on both the Wii and PSP, Totally Games set out to bring the franchise back in the form of a dungeon hack not unlike Baldur’s Gate: Dark Alliance. Up to four players can cooperate to traverse a massive interstellar installation infested with the “Alien Syndrome“. The game is set 100 years after the original and follows the adventures of a military officer named Aileen Harding. She’s sent to investigate an isolated space colony whose communications have been cut off. Obviously the Alien Syndrome is to blame. 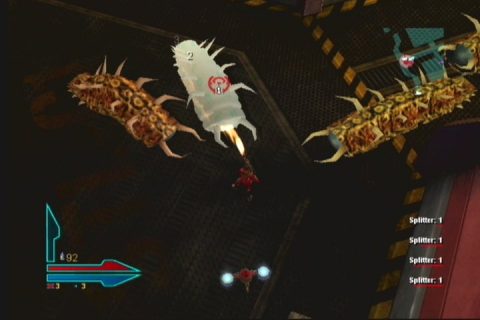 Where the game deviates from the norm is that right from the outset you need to select a character class. This determines what type of weapon you’re most efficient with as well as what attribute bonuses you can earn as you progress. 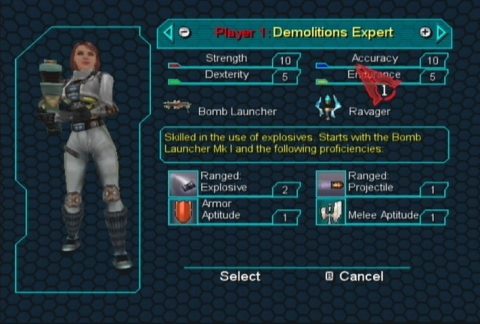 Earn bonuses? Attributes? Character classes? Yes, the 2007 iteration of Alien Syndrome will often have the player spending more time in a menu distributing points and crafting weapons than they will blasting alien creatures. While it’s a successful hack ’n slash, it is less successful at merging dungeon crawling with the deliberately paced action of classic Alien Syndrome. 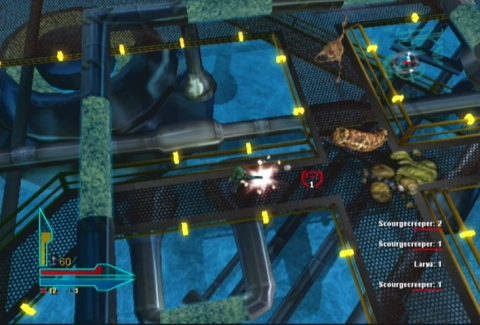 The controls are very smooth. It’s especially effective on the Wii because you can move your character with the nunchuk while selecting, aiming and firing your chosen weapon with the remote. This takes some getting used to, but in the end does a great job of letting you navigate crowds of aliens while still being able to slay them efficiently, as you can easily move in one direction while firing in another. Otherwise, in the PSP version, you can hold down a button to fire and strafe. 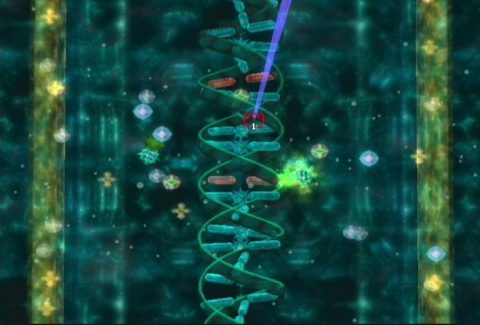 You have a wide variety of weapons that fall into categories based on the original Alien Syndrome’s weapons (flame-throwers, lasers, explosives, and so on) in addition to various types of stat-altering armor to equip as needed. These are equipped on one of many menus you must cycle through to manage your stats, inventory, arms and armor.

The controls on the Wii version are also great because you use the remote as a pointer on all of the menus as well as using motions from the remote as shortcuts for your various melee techniques. You can also use the nunchuk to tilt the camera slightly, something required far too often due to the amount of overheard piping and wreckage the designers have placed between your eyes and the action. 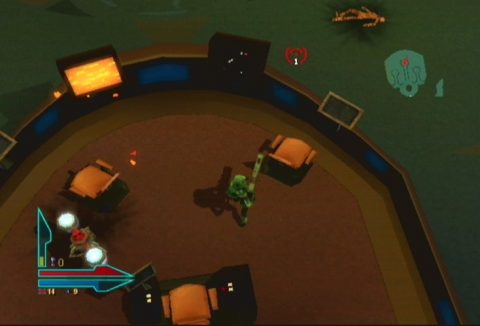 The Wii version also has a few other additions. There are capsules scattered throughout the area which let you play a mini-game that can also improve your character. The mini-games represent different types of research and genetic manipulation, but their rules and structure make them feel pointless and brazenly tacked on. The game’s quality would not change if they were excised completely.

The crafting aspect is handled by a robotic buddy reminiscent of a Mag from Phantasy Star Online. The drone that follows you around is called a SCARAB: Sentient Combat And Recycling Assembly Bot. The recycling part involves you scrapping unneeded weapons and items to gain resource points, which are then used to purchase newer weapons, armor and items. There is a constantly expanding array of goods for you to purchase as you gain more experience through combat. 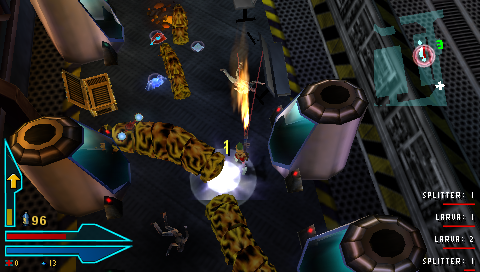 The SCARAB makes multiplayer pretty interesting. Since you can drop any item on the ground at any time, it’s very easy for players to coordinate who should manufacture what item, so as to most efficiently equip each other. This is where the game’s class and stat system really shines, as you can work together to build very different characters that complement each other.

These elements are all intriguing, but their implementation in this game is somewhat unpolished. The biggest offense is that multiplayer sessions have terrible pacing, degenerating into alternating between 10 minute bursts of action and each player assigning resource points in their own set of menus. As a final reminder of the lack of polish the cooperative side has received, each player controls a differently colored Aileen Harding. Alien Syndrome is already a dark game, and while different character classes do have cosmetically different appearances, it was a bad move not to throw in a couple of extra low-polygon models to keep players from losing track of their character.

Graphically, while the game is very effective on the PSP, it’s embarrassing on the Wii. The textures used and the polygon counts for each object are not irredeemable, but the lighting and other effects are garish and make the entire package ugly to behold. The easiest way to see this is to play a game with four people at once. There are so many blinking reticules, jagged shadows and small separate explosions everywhere that it’s almost impossible to follow the action. The sound design is totally unremarkable. The voice acting is above average but every other aspect of the sound design is forgettable and workmanlike.

Artistically the game is a mixed bag. You could criticize the game for having a bunch of gray corridors and the same biological terrors we’ve seen in games and movies for years, but this IS Alien Syndrome. On the up side, the cutscenes are told via very nice static artwork that’s reminiscent of the Dark Horse Aliens comics from the late 1980s while still having an original style. 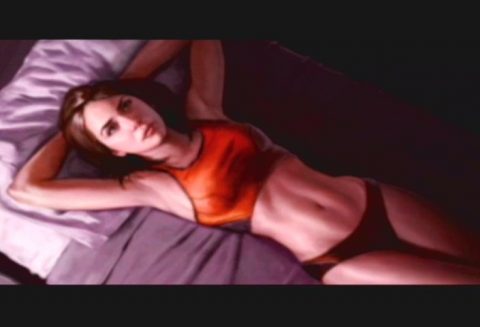 The real letdown is that while many of the stock enemy designs are clearly inspired by the original game, the horror vibe is completely gone. Bosses are simply bigger aliens rather than the shambling, gruesome horrors of the original. This removes one of the things that set the original apart from the crowd when it was new. 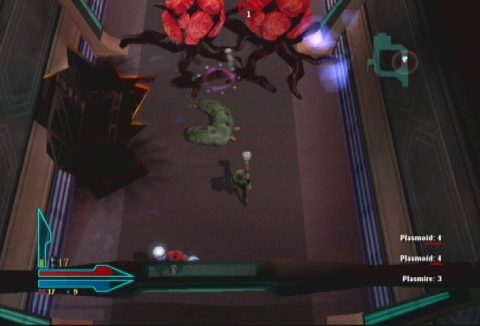 The verdict? Alien Syndrome is a good game, but it will probably appeal more to fans of action RPGs than to fans of the original Alien Syndrome. It’s also best enjoyed with multiple players to keep it from getting too droll.