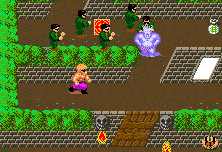 Kyros is a brilliant distillation of authentic ’80s cheese. Developed by Alpha Denshi Corp, otherwise known as ADK, its concept is something like Big Trouble in Little China, but ditches the Chinese underworld setting in favor of a haunted mansion. The hero is a regular dude rocking a rad pair of shades, who makes his mission to stroll forward and pummel everything in his path. And here, “everything” includes enemies up to and including, standard street punks, Japanese onis, knights in shining armor, vampires, bikini clad girls, and Marilyn Monroe impersonators. 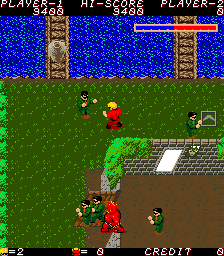 The game itself one of the rare overhead beat-em-ups, that looks like Ikari Warriors but plays like Double Dragon. The hero, identified as Mac, only has a standard punch attack, which is strong enough to send anything and everything flying right off the screen, but can also obtain power ups to wield fireballs, boomerangs and bombs, or turn into the hulking shirtless karate master known as Machoman. He can also jump, which is useful for escaping between mobs of enemies, and also for leaping over the numerous land mines pepper throughout. Said land mines equal instant death, but the infinitely respawning enemies can also flood your hero and take him down with ease. At some points it’s just easier to jump forward ahead quickly and deal with enemies only as they become a pressing concern. 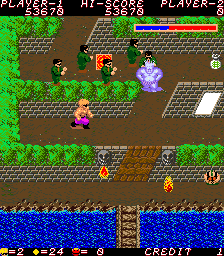 Beyond merely pummeling forward, the environment offers some handy aids, if you know how to exploit them. Barrels and vases can be pushed over to roll over enemies, and opening doors can be used to slam anything on the other side. (The bad guys can do the same to you, of course.) There are many fire-breathing statues attached to the walls, but assuming you can dodge its projectiles and destroy it, it will also kill everything on the screen. More puzzling are the glowing paintings, which, when attacked, will cause a slew of babies to come crawling through a nearby mirror, who then grant points or power-ups when collected. Certain items can also transform all of the enemies on screen into various forms, including piles of gold, chickens, and, if your luck is bad, even more powerful foes. 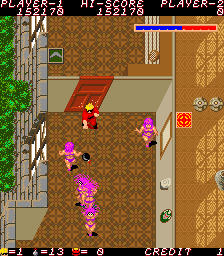 While the game looks and controls well, Mac still feels slightly underpowered. He walks too slowly by default, and projectile attacks are in too few number. His short range attacks work out okay during the levels, but the boss battles prove somewhat too frustrating, as the squadrons of enemies on screen are simply too quick and powerful to fight effectively. 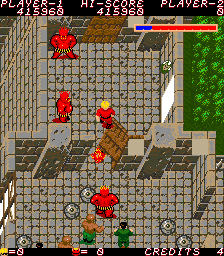 Still, Kyros is fantastic because there’s a beautiful “what the hell, why not?” sentiment throughout the whole experience, a hallmark of an area where video games didn’t have to be so damn serious. Plus, one of the music tracks also rips off Frank Stallone’s song “Far From Over”, most famous for its use in the 1983 disco film Staying Alive.

Although Kyros has since fallen into the depths of obscurity, Mike Ebert has cited the game as being an inspiration for the Genesis/SNES cult hit Zombies Ate My Neighbors. The games play entirely differently, but both games share a tongue-in-cheek horror setting, along with the slightly skewed overhead perspective. 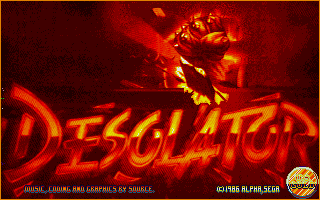 Kyros was ported to a handful of home computers, although the name was changed to Desolator. Sega seems to have been involved in this effort as a publisher, which indicates they may have been the publisher or distributor of the arcade version in Europe, though none of the current ROM sets in MAME support this. It would make sense though, as Sega distributed many of ADK’s earlier games.

The Atari ST version is the best looking of the bunch, but plays very slowly. It has its own unique title theme, but no music is played during the game. The Commodore 64 version has a pace similar to the arcade version, though it feels slightly sloppy and the hit detection doesn’t quite seem to work. It too has its own original music, both on the title screen and in-game. The Amstrad and Spectrum versions have sidebars on the left side of the screen, to more closer replicate the display ratio of the arcade version. The Amstrad port looks better than the Commodore 64 version, at least, though the Spectrum port is addled with bad coloring. None of these ports really replicate the aspects that make the arcade release.

The Japanese title is Kyros no Yakata, which means “Halls of Kyros”. Kyros is the name of the vampire who happens to own the mansion you’re infiltrating. The advertisements for the computer version proclaim the game as a port of “The Halls of Kairos”, even though in-game text refers to it as “The Halls of Kyros”. 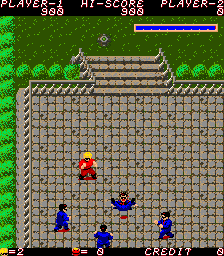 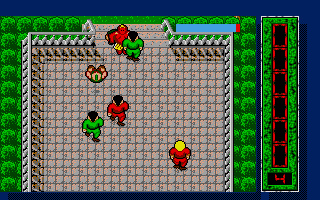 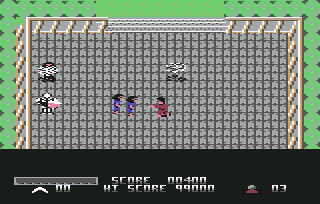 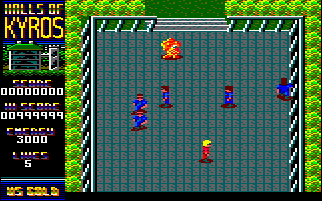 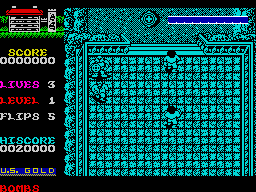