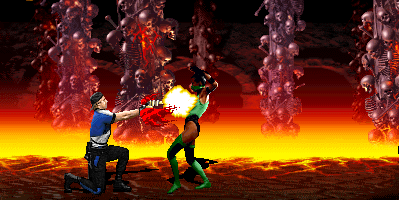 Mortal Kombat 3 never proved to quite as popular as its prequels, and arcade fans and operators alike had complaints. Some characters, like Kabal, were just way too powerful. Other people complained about the lack of series regulars, like Scorpion and Kitana. And so, with a lot of issues needing to be fixed and Mortal Kombat 4 still more than a year away from release, Midway would basically pull a Capcom. While this isn’t the only update MK3 would end up getting, this is the version most people have probably actually played. It’s also considered one of the more competitive games in a series not known for such, which helped give the game a little more longevity. 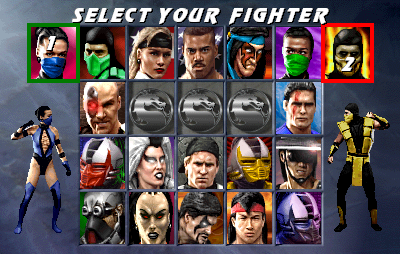 The story is more or less exactly the same as Mortal Kombat 3, with the addition of a few new characters either joining in the fight for or against the forces of Shao Kahn. Reptile, Scorpion, and Kitana make returning appearances as playable characters, whereas Jade becomes playable for the first time. Robot Smoke is now selectable from the start, with Mileena, MK2-style Sub-Zero and newcomer Ermac being unlocked with new Ultimate Kombat Kodes. Noob Saibot makes an appearance as a secret challenger, but he’s only playable in the internet-enabled Wavenet version of the game (which MAME currently doesn’t support). The returning characters have had a few tweaks, too, mostly balancing tweaks. Some of them get new moves, like Stryker, who now actually thinks of using the gun he fires in his win pose in combat. You can now also initiate chain combos from a jumping punch, which makes them a little easier to start one. 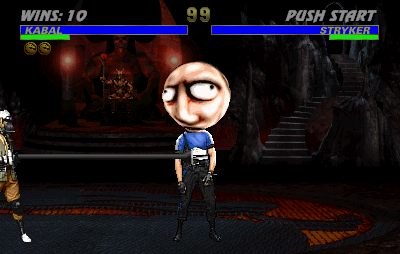 The single player mode has been changed a little, so now you have four difficulties to choose from when you begin a game. Unfortunately, the AI’s been made much more brutally unfair compared to the original MK3. Now the AI will counter nearly everything you do from the first few matches, and it’ll do it so well that there’s absolutely no way it isn’t cheating. For example, if you try to jump towards it, it jumps at you and does a kick, every single time. If you try to jump backwards, nine times out of ten, it throws a projectile that will more than likely hit you. Anything you try to do, it’ll find some way to punish you for it. Even worse, the endurance matches from the original Mortal Kombat have returned, and on higher difficulties you even have to face three opponents on one round. This game does not want you to beat it, ever.

If you manage to beat Shao Kahn this time around, which you probably won’t be able to do without some serious cheating or AI exploitation, you’re sent to a screen called ‘Shao Kahn’s Lost Treasures’. From here you select one of twelve different symbols, each one giving you a different prize, one of which is getting to see your character’s ending. Yes, this time around, you actually have to choose if you want to see your character’s ending. Not that it’s really worth it, since the unique ending artwork for each character has been replaced with their VS portrait placed next to a bunch of scrolling text. The other treasures do things like starting a fight with either Noob Saibot, Ermac, or both at the same time, the Galaga minigame, and a demonstration of some of the game’s Fatalities, among others. The problem is that certain options are only available on higher difficulties, so if you want the good stuff, be prepared to spend a lot of credits. 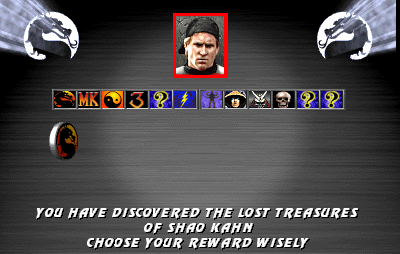 There are also a couple of new VS modes, if you ever get tired of one-on-one kombat. There’s ‘4 Player 2v2 Kombat’, where two players pick two characters and fight it out. If one characters runs out of health, the other jumps in to continue the fight. There’s also ‘8 Player Tournament Kombat’, where 8 players select a character and fight it out in one-round matches. It’s a nice idea, but if you actually run a tournament for this, it’s probably better to handle a bracket through paper. You also get the full set of Shao Kahn’s Treasures for completing this mode, but if you’re playing the actual arcade version, it’ll take 8 credits before the game will even let you access it. Unless you happen to own the game and set it to free play. 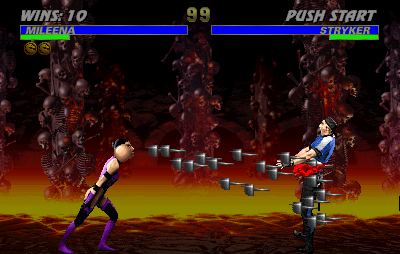 The game is pretty much the same aside from the new content and balance tweaks, so the rather goofy tone is still in full force. The balancing means that it’s actually worth it to play this game competively, unlike most of the Mortal Kombat games, and it’s nice to have Scorpion back after his absence. Overall, it’s best to forget the original Mortal Kombat 3 happened and go straight for this version instead. This is far from the last we’ll see of the MK3 engine, and it’s at this point the series starts to look pretty dated compared to the likes of Street Fighter 3 and Tekken 2. 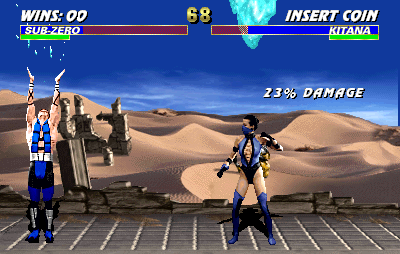 The Super Nintendo and Genesis ports are pretty much just the same ports of MK3 with UMK3‘s new content added in, which means that while it doesn’t look much like the arcade, it at least plays like it. Sheeva’s been removed from the game entirely due to memory constraints, and in her place are… try to constrain your excitement here… more ninjas. Noob Saibot and Rain make their first playable appearances here, with their own special moves. All the secret characters are also unlocked from the start, with Smoke’s human counterpart being unlockable with a code.

Animalities are gone, and they’re replaced with the slightly less goofy Brutalities. These are basically the equivalent of Killer Instinct‘s Ultra Combos, performed by doing your character’s special chain combo when it comes time to finish your opponent. If you do this right, they’ll continue to beat on the opponent long after you quit hitting buttons, until they explode into a pile of blood and legs. It’s a pretty cool finisher, at least compared to how stupid most of the Animalities were. This port also uses the same cheat menus, which means that yes, you still have to use cheats to be able to pause the game. Talk about arcade perfect.

The Saturn version at its core is still MK3, just with some of the extras from UMK3 added into it, since the Saturn never got a port of the original version. None of the console exclusives from the other versions appear here, which means no Rain or Noob Saibot. It doesn’t play that badly, though, and it looks pretty accurate to the arcade version. Just like MK2‘s Saturn port, however, you do have to deal with the periodic bit of loading during matches and before Fatalities.

The Game Boy Advance version, renamed Mortal Kombat Advance, is nothing short of a complete abomination. This port got farmed out to some developer called Virtucraft, and it’s obvious they were trying to rush this thing out as quickly as possible. With the GBA’s powerful hardware, you’d expect something at least on the level of the SNES port, but we ended up getting something that’d fit more on the Game Boy Color. For one thing, a couple of attack buttons had to be dropped, which is understandable due to the GBA’s button layout. What’s less understandable is that for some reason, the AI has become a merciless terminator that even beats out the sheer cheapness of the arcade version. Even worse, it feels like the entire game engine has been recoded, and what’s left plays horrendously. Attacks are slow to come out, the physics are incredibly floaty, and pulling off special moves is entirely too difficult. There are only about two songs that actually play during fights, both of which loop after only a few seconds, and everybody’s missing their second Fatality for whatever reason. The only real bright side is that you can unlock Shao Kahn and Motaro as playable characters, but to do that, you have to beat the game, which isn’t worth your time at all. Avoid as hard as you possibly can.

The DS version, which drops the number 3 out of the title, looks, sounds, and generally plays exactly like the arcade version. The sprites aren’t quite as big due to the DS’s small screen, but other than that, it’s quite accurate. The bottom screen also shows a move list with Fatalities for your current character while you play, which is handy. There’s also online play, if that’s your sort of thing. What’s more interesting, however, is that this port comes with a version of Deception‘s Puzzle Kombat mode, with lower poly models fighting on the bottom screen. It’s not as good as Puzzle Fighter, but its inclusion is still nice.

The iPhone version has some pretty bad control issues, just like you’d expect from trying to play a fighting game on a touchscreen. They try to make the controls easier by dropping two of the attack buttons and adding a ‘Special’ button, but it still more than likely won’t help much. On the visual side of things, the characters and stages have been completely redone in 3D. The problem is that they animate exactly the same way the original sprites did, which makes the animation look pretty janky. There’s also a new mode called ‘Shao Karnage,’ where you have to get as many hits as you can on Shao Kahn before time runs out. You can also play multiplayer through wifi or Bluetooth, but why not just play the PS3 or 360 versions for that? 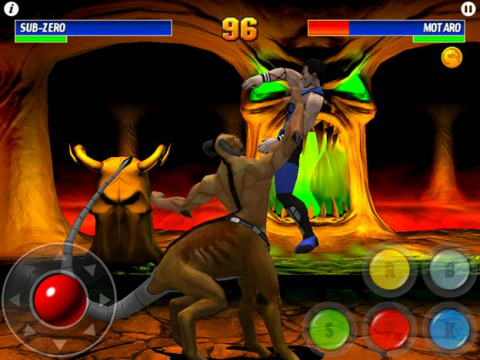 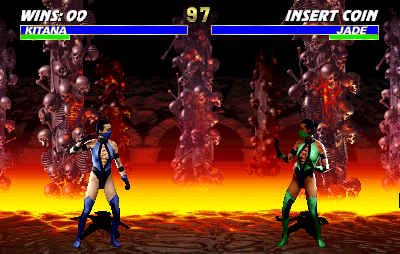 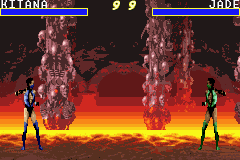 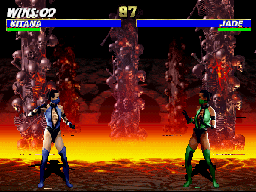