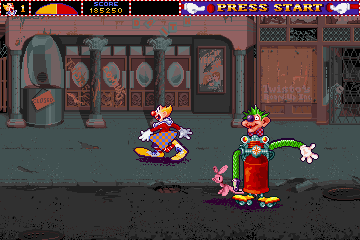 In the world of beat-em-ups, it takes a lot to be remembered. Even such gems of the genre as Ninja Baseball Bat Man and Guardians have ended up tragically ignored until the days of MAME arrived. The question is, what does it take to make a brawler that people will remember? Well, it takes fine-tuned controls, interesting design, and maybe even some kind of unique feature that people will remember your game for. 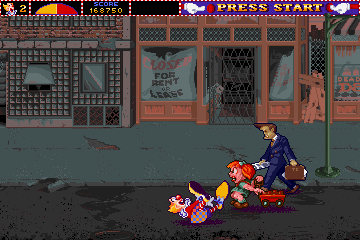 And of course, it would definitely help you don’t make your game about ninja clowns. You think that’d be obvious, but you aren’t Strata, makers of such fine arcade hits as Time Killers and Rim Rockin’ Basketball. We’re already at strike one from the title alone. Strike two comes from the fact that while, yes, the game does star clowns, they don’t perform anything that could even be remotely described as ninjitsu. And so, as either one or two circus performers sadly lacking in the art of the shadow, it’s up to you to attempt to rescue the city of Centersville from the evil clown Twisto, until you eventually realize that you’re playing a game called Ninja Clowns.

Of course, there’s that whole thing about books and covers, so you probably won’t be surprised to learn that once you get past the title, Ninja Clowns isn’t a very good game. It’s a beat-em-up, or at least, it attempts to be. Nothing about Ninja Clowns resembles any traditional beat-em-up from Final Fight and onwards, nor does it resemble a well-made game. You’ve got a button for punching, one for kicking, and one for “throwing”. If you don’t have one of the various special weapons you find equipped, this just makes your clown hold out his hand and leave himself open. If you do, it uses your current weapon… exactly like the punch button will. No, you can’t throw enemies at any point in the game, meaning that you already have one button that’s basically useless. 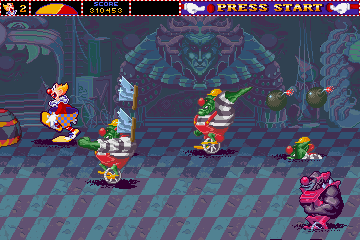 You do, however, at least get a decent set of moves. Unfortunately, some of them are either entirely useless, like the move that makes your clown jump ten feet into the air, far above any enemies you could actually hit. While the game does have a typical space-clearing special attack, ala Final Fight, Ninja Clowns is not bound to the rules of any mortal man nor beat-em-up. Instead of draining your help, the more you use your breakdance again, the more startup the move will have, until it becomes so slow that it’s nigh useless. It’s an interesting way of handling it, especially given your rather short health bar, but it’s just one of the many ways the game feels like the kind of brawler you’d find in some hypothetical mirror universe. You’ll also find various clown-based weaponry, like a spray bottle, pies, and an extendable boxing glove, but these only get so many uses and don’t appear all that often, meaning you won’t get all that much use out of them.

Other than that particular piece of cheapness, however, it’s a pretty mediocre beat-em-up. You’re still moving continually towards the right, beating up enemies, usually never more than three at a time. While you do have a handful of special moves, including the aforementioned incredibly useful spin attack, there are absolutely no combos, grab moves, or anything you’d expect from a typical beat-em-up. Since there’s no way to put any enemies into hitstun, this often means your best option is to wander around and mash on the attack button. If there’s any move you can really rely on for damage, it’s the roll attack, which can be consistently spammed to take out the various foes that approach. 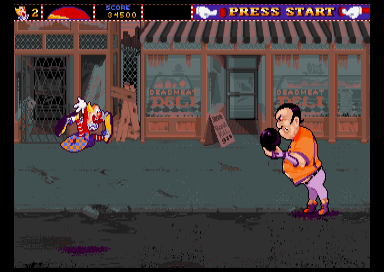 If you aren’t using that one particular move, the game gets a lot harder. Your life bar is actually a lot shorter than it looks, and most enemies can kill you in about eight hits or less. Enemies also don’t usually have the same problems landing hits as you, which means that they can hit you when your moves generally pass right through them. The enemy AI is often random at best, usually tossing around projectiles until you get into punching distance, which is when they’ll gang on you and stunlock you to death. Boesses are generally about the same, only their attacks can kill you in about two hits or less. It’s not that the game feels difficult, as it does entirely random in terms of difficulty.

It is, at the very least, a very short game, as far as brawlers go. Enemies, when you actually land a hit on them, take about two or three hits to kill, and the levels tend to be rather brief. While there’s about nine stages total, you can probably clear the game in a half hour or less, far less time than you’d spend playing much, much better games. Due to its length, it’s less a game you play and more the sort you experience, just to say that yes, you are a person who has played Ninja Clowns, a mark of shame that will never, ever leave you. 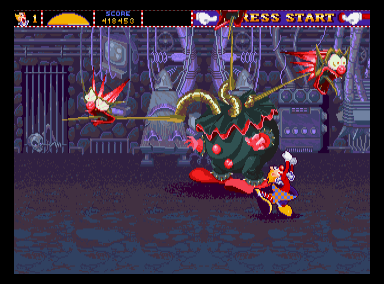 It may comes as a surprise, but Ninja Clowns is a very weird game. Enemies change up every level, and include such foes as hookers, anti-war hippies, lawyers, Girl Scouts, and mimes. The bosses get even weirder, including foes like an angry bowler and a chicken with breasts that fires eggs out of its ass towards your clown. If the clowns don’t give you nightmares, that certainly will, don’t you worry.

Overall, Ninja Clowns is a game that shouldn’t exist, and yet it does. In an era where arcade machines cost hundreds of dollars, a team of people put together a game called Ninja Clowns, and they all agreed that arcade operators would more than likely spend hundreds of dollars to own it. Even if the game itself is aggressively mediocre, that’s a certain boldness that you have to admire.