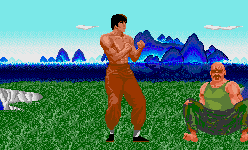 China Warrior is about Bruce Lee fighting his way through armies of Gregorian monks and sentient rocks and twigs. No, your hero’s name is actually Wang, but his resemblance to Bruce Lee is close enough that if the game actually sold well, Hudson could have been sued by his estate. The game’s main catch is its gargantuan character sprites that are half the screen’s height, and they do look fairly impressive at first. However, the large scale comes with the price of awkward gameplay, as you’re not given a lot of room to maneuver and your movements are clumsy. It plays akin to Irem’s Kung Fu Master mixed with elements from Taito’s Gladiator, with the caveat of automatically marching to the right borrowed from the latter game. You stop moving if you duck or attack, but the limited movement control is often problematic with which to work. Each level, of which there are four, is divided into three parts, but the basic premise of each part is the same, where you need to survive a gauntlet of mooks and obstacles and reach the boss. This is all you do for all twelve total segments without much variation at all. 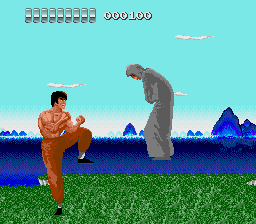 The human enemies you face are weird cloaked figures who come in three flavors: Basic idiot gray (they only march forward but come in high numbers), sickly smart-ish green (they duck temporarily to avoid your attack before charging again) and elite neon orange (they take three hits before flying off). They’re not too bad except for the tough eye-searing orange ones, but you also have to deal with pests and projectiles, like bees flying in a sine wave and some jerk tossing rocks and twigs at you from offscreen. There are arrows, fireballs, and even ornate plates which you can all duck, jump, get hit by, or punch out of the air which may occasionally earn you a bit of life. You’ll also find what looks like a floating cigarette box that restores a fair chunk of your lifebar if you can jump kick it. It seems ironic to gain health from a cigarette box, but considering you only earn life if you kick it, perhaps there’s a message in there somewhere. 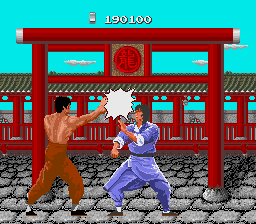 Whatever the case, you’ll need as much life as you can grab, as it gets really difficult to dodge or hit these objects even in early levels. This is where China Warrior‘s main fault occurs with the giant characters, as the proportion of Wang’s sprite leaves you with less room to dodge the fast objects that fly in from the right. Gladiator had a shield that made blocking obstacles somewhat fair, but all you have to defend yourself here are your limbs. You get bombarded with projectiles almost unfairly in later levels to the extent that a single poke on the forehead from the boss fight will knock you out, if you can even reach them. 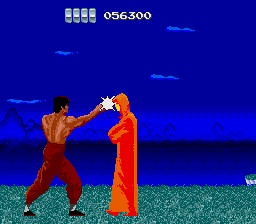 As for said boss fights, they could have potentially been the main draw of the game but turn out even worse than the scrolling parts due to cheapness that rivals the AI of a mid-nineties SNK fighter. Your opponents include a bald mustachioed commando of some sort, a female gymkata fighter, an off-color doppelgänger, and totally-not-Jackie Chan to serve as a counterpoint to your totally-not Bruce Lee. These parts could have been cool, but the hit detection is grossly rigged against your favor and it seems like a crapshoot as to whether your attacks will actually damage your opponent. Starting with not-Jackie Chan in the third level, the fights become brutally unfair as the bosses all block your attacks without much fail and strike aggressively in return. You sometimes block hits by pressing your attack buttons at the same time you’d get hit, but this feature isn’t reliable. Also unreliable is your super punch, where tapping forward and button I sometimes grows your fist to a somewhat comical proportion and smashes through the enemy’s defense while dealing multiple points of damage at once. It would be nice if you could control this special move, but it only seems to appear whenever it wants to, uncaring if you are brutalized before it ever appears once. 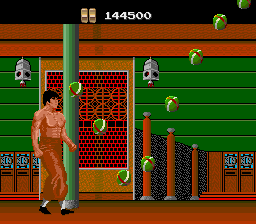 Most people probably wouldn’t make it to the final boss, either due to horribly unfair difficulty or realizing they could spend their time on a better game, but it deserves mention. You have to reach him by punching a boulder many years before Chris Redfield became infamous for it in Resident Evil 5, and then you find the last boss is a dead ringer for Beggar So, the “Drunken Master” as played by Simon Yuen in the movie of the same name. It would make sense assuming not-Jackie Chan is evil and, ergo, his master is the evilest of evils, and he does fight like a demon. His kicks take away two points of your life per hit and he’s able to recover his health from his infinite alcohol supply, so even if you do somehow make it this far, you need copious amounts of luck to win and get the lame ending which isn’t even worth the effort. You only get a limited number of lives, and though you can get more by earning enough points (particularly through the bonus stages where you time hitting an ornate vase with nunchaku), you get no continues. The game is technically short, but it takes too much effort to even beat the third level, and would you really want to? 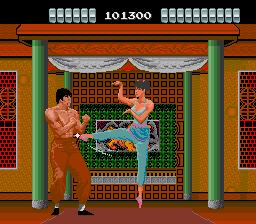 China Warrior is probably best treated as little more than a tech demo for the potential of the TurboGrafx-16 instead of a legitimately entertaining game. The graphics look neat at first but the backgrounds are repetitive and the novelty of the giant characters wears out pretty quickly. The music is technically cool, but there are really only two major tunes and they’ll also become tired after extended play. When you get the flawed aesthetics out of the way, you’re left with an excruciating mess of a game that felt like it could have been decent if the challenge and awkward controls would have been tempered. It’s a good thing you aren’t actually Bruce Lee, or else this game would almost be a greater disrespect to his memory than Game of Death. Hudson thankfully moved on from this dark mark in their history, but almost every game company has an old shame in their history and China Warrior is that for the publisher of Bomberman and Bonk.