As one of the very first arcade games, it’s surprising that Pong never really got as many remakes or games in its style as something like Pac-Man and Space Invaders. It’s about as simple as a competitive game can get, though, so that might have something to do with it. Data East, however, who specialized in quirky, creative arcade games like Nitro Ball and Boogie Wings, among many others, would take the basic concept of Pong and pump it full of crack with Windjammers. 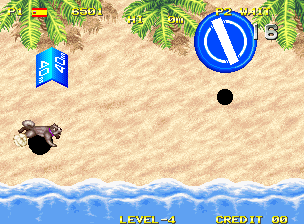 In Windjammers, there’s a championship going on among six players from across the world, and it’s up to you to eliminate everyone (including yourself, oddly enough) to win. The basic game itself is sort of a cross between tennis and volleyball, only with a Frisbee (or a “Flying Power Disc”, depending on how careful about copyright you want to be) in place of a ball.

The court’s divided into two sides with a net splitting the two, with one player occupying each side. What you’re trying to do, basically, is toss the disc so that it lands in your opponent’s goal, while doing what you can to prevent this from happening to you. There are a couple of ways to score, the easiest of which is to just launch the disc into one of your opponent’s goals. The two yellow ones are worth three points, while the single red goal on each side earns five whole points. There are also times when the disc will end up getting launched into the air, and if it hits the ground on somebody’s side of the court before they can catch it, the other player will earn two points. On default settings, a set lasts for 30 seconds or until somebody earns 12 points, whichever comes first, and the winner of best two out of three sets wins the match. 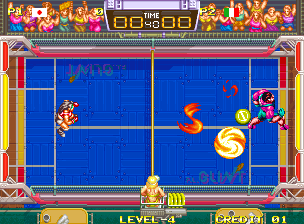 When you’re in possession of the disc, tapping the A button will throw it, and the sooner you hit the button when it’s in your hand, the faster it’ll go out. If you toss the disc the very instant you catch it, your character will yell out something and launch the disc so quickly it leaves a trail behind it, making it extremely difficult to catch. If you don’t hit the button at all, however, you’ll toss the disc very slowly. Hitting the B button while you’re holding the disc will lob it over the net, which is better used for faking out your opponent more than anything, given how slow the actual toss itself will be. It also gives your opponent the opportunity to use more powerful throws against you, so it’s best saved until you know what you’re doing.

When the opponent has the disc and you’re on defense, tapping A and a direction will let you slide, giving you a chance at a last-second catch before the disc hits your goal. Catching is automatic, as long as you’re facing the disc. If not, you run the risk of getting beaned in the head and knocked over for a few moments, scoring your opponent some easy points. In fact, you’re not always even safe when you catch the disk, as powerful throws can send the catcher sliding back, possibly right into their own goal if they’re too close. Hitting A while the joystick is in a neutral position will actually make your player deflect the disc, and this is where most of the game’s skill comes in. It’s absolutely crucial that you learn to deflect properly if you want to have any chance of winning. 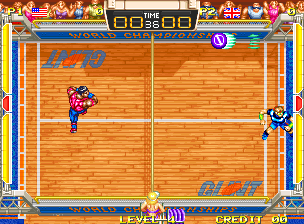 When the disc is deflected, it’ll get sent up into the air above the court, getting different amounts of height depending on how it was thrown and how well you timed the deflection. When this happens, a crosshair will appear over where it’ll land. Have your character stand over this crosshair for long enough, and they’ll charge up with energy. Once the disc is back in their hands, they’ll use a different move depending on how long they were under the crosshair. With only a little bit of energy, they’ll throw an extra fast shot, much like if they had caught and thrown the disc with perfect timing. If you’re under the disc for long enough, however, a ring of energy will form around your character, and you’ll earn the use of an even more powerful throw.

Hitting the A button once you’ve reached full charge will have your character use their signature move, which is your best bet at scoring a goal against your opponent. The USA player, for example, sends the disc bouncing across the walls of the court in a flaming zig-zag, while the U.K./Korea player sends the disc riding along one of the walls like a buzzsaw. Performing a curved throw while any character is charged up will send the disc on a loop-de-loop path. Pressing the B button while you’ve got a full charge will instead make every character throw the disc into the air on its side, rolling straight forward as soon as it hits the ground. All of these throws can be hard to catch and are very likely to send your opponent sliding back into the goal if they hit, so they’ll be your best chance of scoring a goal, for the most part. 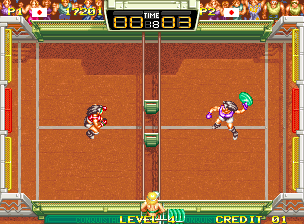 Almost everything about Windjammers revolves around split-second timing, and with some practice and a little luck, you can reverse pretty much anything an opponent throws at you. It’s even possible on very rare occasions to actually catch an opponent’s signature throw, copy it, and then launch it right back at them. And yes, it’s entirely possible for your opponent to do the same to you, leading to what’s basically some sort of Dragon Ball Z-esque Frisbee battle. It can be a little overwhelming at first to play against a really good player, but with practice, it’s entirely possible to pull off some really cool stuff.

There are six different characters to pick from, with two each meant for beginners, standard players, and experts. Each character is rated in terms of their speed and power, with the latter determining how fast they can throw their disc, and how far back they’ll slide if they’re hit with a particularly powerful throw. None of the characters share much in the way of personality, besides a few voice clips, so it comes down to what kind of play style you prefer. 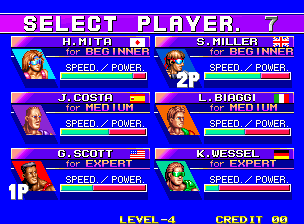 If you manage to get far enough in the game’s single-player mode, there are a couple of bonus games you can play for extra points. Dog Distance involves making a dog chase after the disc your character throws, jumping over things like suntanning beachgoers. Flying Disc Bowling is more or less exactly what it sounds like. Neither of the bonus games are good for much beyond points, but they make a nice break from having to tangle with the rather frustrating AI.

Graphically, Windjammers is pretty great. Given the kind of outfits the characters wear, not to mention all the pinks, purples, and blues, the whole game has a very 80s feel to it. It’s an interesting look, given the game was made firmly in the 90s, and it goes pretty well with the setting. The characters, while they’re not especially large, have a lot of detail to them, like just how muscular the more powerful players are. The courts themselves aren’t all that impressive, but have a few nice touches, like the judge who referees the match and tosses in new discs for the players. 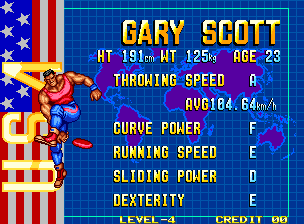 The music, much like the rest of the game, has a really 80s beach party feel to it. Most of the tracks aren’t really that notable, except for the Concrete court, which comes with lyrics. There’s a nice touch where each character speaks their own native language, and they all have a few voice clips for things like scoring goals and executing signature throws. The judge, oddly enough, has quite the thick Engrish accent on her. 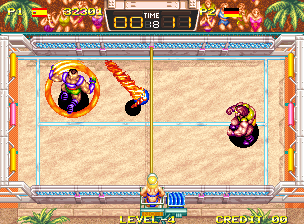 Overall, if you can get past the rather daunting learning curve, Windjammers is a lot of fun. Sadly, the game never made much of an impact on release. The Neo Geo CD version is more or less identical to the arcade release, except for slightly higher quality music. About the only major regional difference is in the dip switches, which gives you the option to replace Steve Miller, the U.K player, with a Korean player named Beeho Yoo. They both look and play exactly the same, aside from their voice clips. A sequel was planned, but was never released, nor have any screenshots surfaced.

Garou: Mark of the Wolves