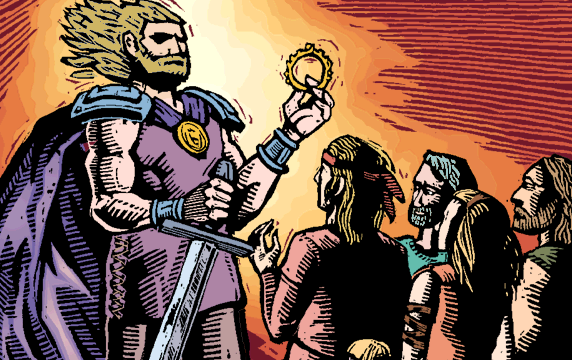 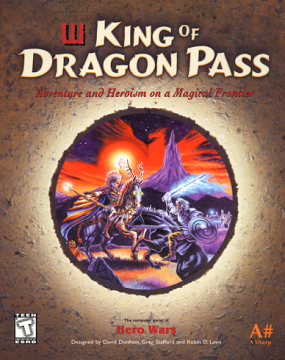 King of Dragon Pass is an extremely unique game. Everything from its setting (the decidedly non-Tolkienesque fantasy world of Glorantha) and visual style (which consists mostly of static, hand-painted pictures) to gameplay (largely text-based and menu driven, combining the elements of turn-based strategy and choose your own adventure) is very much unlike anything else on the market – now even moreso than at the time of the game’s release. 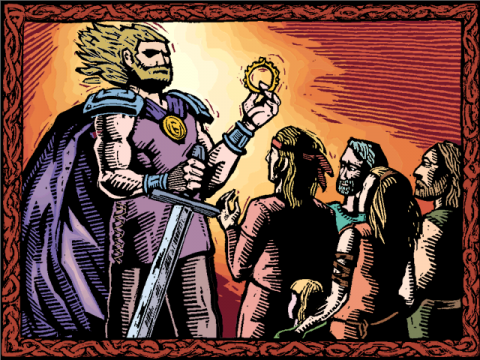 The game begins with the creation of player’s clan through a series of questions detailing its history from the times when gods walked among men to its conflict with a despotic Pharaoh and subsequent migration to the titular Dragon Pass. Your answers here determine not only your starting conditions (your patron god, the amount of land you possess etc.) but also the traditions you’re expected to uphold. This is extremely important as your ancestors will reward or punish you (by giving or taking away your magic) depending on your adherence to those customs. It’s advised to write down or remember who was your ancestral enemy (never make peace with them) and what was your attitude towards dragons and the institution of slavery (act accordingly). 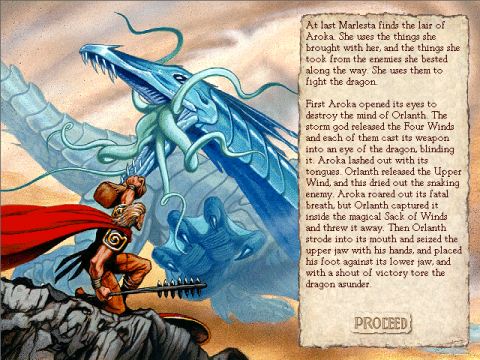 After the clan is created, the proper game begins. The strategic portion of King of Dragon Pass consists of various clan-related actions performed by the player, each taking an in-game month. For those more interested in warfare, game offers raids against any clan (although if passage through someone else’s land is required, he may demand tribute) as well as an ability to send a small group of soldiers to steal cows from your neighbors. On the more peaceful side, trading caravans and diplomatic emissaries might be sent to improve your economic situation and relations with other inhabitants of Dragon Pass. The players can also order his people to explore the game world to advance the plot. When doing any of those things, it’s wise to keep track of the current season – raiding in time of sowing (Sea season) or harvest (Earth season) hurts the crops while every kind of travel is dangerous during the winter (Dark season). 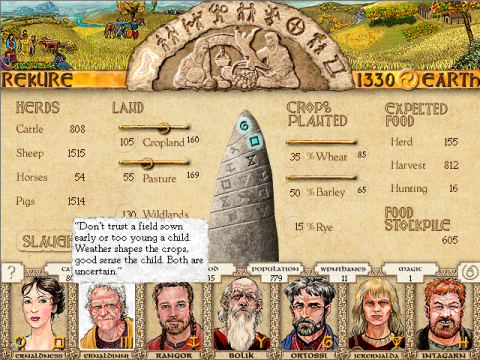 Internal politics of the clan are no less important than its relations with the outside world and they might provide and even bigger challenge. The basic resources to keep track of are cows (both source of food and a currency), goods (necessary for building temples and fortifications), food, population, weaponthanes (elite fighters) and magic. In addition to that, there’s a lot of room for micromanagement with different animals (pigs, sheep and horses), distribution of the land between pastures required to feed animals, wildlands for hunting and croplands as well as controlling how many members of your clan are tasked with farming, hunting, crafting and fighting. The player (who doesn’t occupy the role of a single character but rather controls the clan from the “godlike” perspective typical for strategy games) can also choose members of the clan ring – leaders of the clan and player’s advisors. 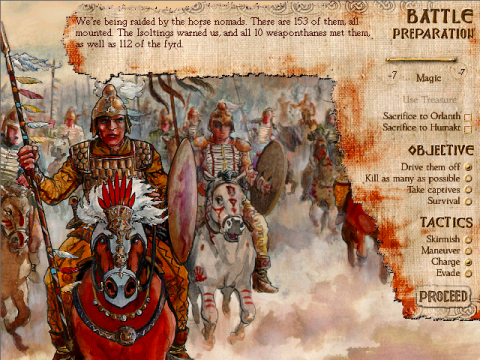 Life in the Dragon Pass isn’t only about politics and resource management though, as members of your clan worship gods and use magic. Building shrines and sacrificing cattle and goods may result in receiving various blessings, allowing boosts to anything from harvests to military power. At the beginning of each in-game year, during Sacred Time, prophecies for the coming year are received and magic points may be allocated to further increase the welfare of your clan. Magical treasures may be kept for their beneficial effects and sometimes used during combat. More importantly, at any point during the game (provided the clans knows the details of the myth in question) members of the clan can perform heroquests – ritual reenactments of stories from the lives of gods. Heroquesting is extremely risky (it may result in death, loss of resources, destruction of treasures and other nasty things) but also very rewarding and in fact necessary to finish the game. 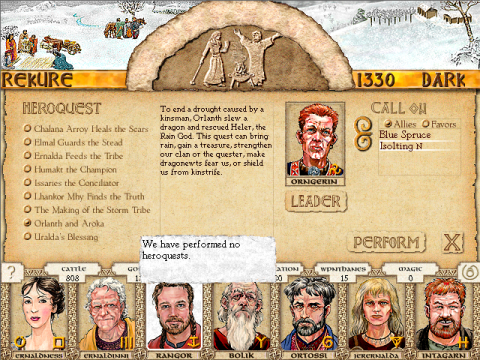 As deep and involving as they are, the strategy elements are not the main draw of the game. Heroquests, emissaries, exploration of certain locations and random events make the game go into choose your own adventure mode, and this is where it really shines. Those events, accompanied with beautifully painted artwork, turn King of Dragon Passinto an engaging, highly non-linear narrative. Like in a true visual novel, choose your own adventure portions of the game convey its basic plot. Besides allowing the player to create his clan’s backstory, they also show its rise to prominence through religious rituals (as certain heroquests are necessary to advance the plot) and successful politics, the uniting of clans into a tribe, war with mysterious nomads known as Horse-Spawn and rise of the eponymous King of Dragon Pass. Of course, if player does badly, they could also tell a completely different story – one about failed leadership, angry gods, starvation, lost battles and finally the last living members of your clan leaving their land in search for a better place. 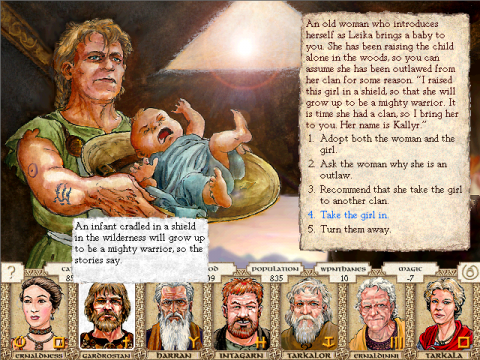 In addition to the main plot, those events offer many smaller storylines and a great deal of worldbuilding. The heroquests, inspired by Norse and Celtic mythology, give a fascinating insight into Glorantha’s religion and are generally very well-written stories for those who like old myths and legends. Random events and exploration lead to encounters with other inhabitants of Glorantha including duck-people, elves (shown here as plant-like spirits of the forest), ostrich riders from Prax, wind spirits from Mount Kero Fin, Storm Bulls, spawns of chaos and many others. There’s also a lot of humor and personality in many of the events or possible solutions to them. An example of the former might be a mysterious curse that causes children of your clan to grow beards, while the latter can arise during the haunted house event when – by using a character with good knowledge of laws and customs – player might be able to take legal action against the ghost and succeed. Little touches like that provided needed comic relief for a generally grim game.

Knowing about its great narrative potential, developers have included the ability to read a saga describing any playthrough. Sagas are automatically generated and chronicle the history (including Sacred Time prophecies, raids, events, heroquests and most of other important developments) of player’s clan year by year. They can be read in-game or from the text file generated automatically for each savefile. The game does however have some shortcomings. The biggest one is its reliance on random number generator during combat and heroquests. The result of a battle is always difficult to predict, especially given the fact that the player controls only his army’s basic strategy (attack from the distance, charge, attempt a maneuver or escape) and objective (for example an attacking force may attempt to conquer enemy’s land while the defenders try to take as many prisoners as possible). Heroquests are even more unpredictable as even with appropriate use of blessings and Sacred Time magic, character with high statistics who worships quest’s god and all the correct answers chosen there is still a chance of the quester dying or getting lost (which does not necessarily result in death but prevents you from completing the quest). This can lead to many annoyances, especially when the player finds out that the game has a hidden time limit. It’s quite generous but if it runs out, someone from outside of your clan becomes the king and the game is over. Another problem with King of Dragon Pass is its repetitive soundtrack. Both the music (catchy folk tunes with mood appropriate for current events) and sound effects (sounds of fighting, feasting or animals, depending on the situation) are good but there’s simply not enough of them, especially given how much of a time sink this game can be. Windows and Macintosh versions of King of Dragon Pass were released in 1999. As they were compiled from the same source code, they’re completely identical. Those versions are mouse-controlled (with keyboard allowed for making decisions in choose your own adventure portions of the game) and run in 640×480 resolution. Original CD release containing both Windows and Macintosh versions is difficult to find nowadays and reaches very high prices on eBay but the digital download of Windows version configured for modern computers can be bought from Good Old Games. In 2011, A Sharp decided to port the game to iOS devices. This version is controlled with touchscreen. While the gameplay is the same as on home computers, the interface (especially during strategy segments) is noticeably redesigned. Saving is now done automatically, although a player can still correct his mistakes by using newly added revert function in sagas menu to go back to a different year. Minor changes include replacement of clan overview screen which described how your resources compare to what you had in previous year with a relevant fragment of your clan’s saga. Also gone is the original game’s tutorial – a system of hints is offered instead.

Herocraft’s Android version released in 2014 is basically a port of an iOS port. It looks and plays identically but supports arbitrary screen sizes for different Android-equipped smartphones and tablets.

King of Dragon Pass is a forgotten gem that might finally get recognition it deserves due to its mobile port. While the game is not perfect, its strong writing (clan creation and heroquests feature possibly the best mythological stylization in the history of video games), beautiful artwork and addictive gameplay make up for its flaws. It’s also a very ambitious project and a game unlike any other – and that alone makes it worth playing.