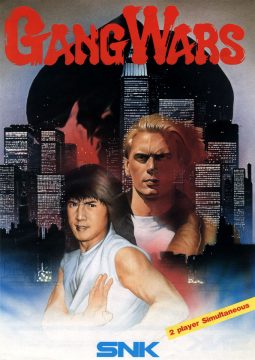 Many game developers borrow, and in some cases outright steal character designs and other concepts from various media, but few developers in the 80s were as brazen about it as SNK. Even in their very first game, a shooter named Ozma Wars (1979), has your character repeatedly dock with a ship sharing the exact profile of the titular craft from Space Battleship Yamato. Two years later they would release Vanguard, a shooter which proudly plays beeping renditions of music from both Star Trek: The Motion Picture and Flash Gordon.

With Gang Wars, ADK and SNK borrow liberally from films like The Warriors, anything featuring Jackie Chan, and assorted other martial arts movies. Like most beat-em-ups from the late 80s and early 90s, the premise is boilerplate. A woman named Cynthia is kidnapped by a gang leader named Jaguar. Two of her friends, Mike and Jackie, set off on a quest to rescue her by beating up the gangs that run every neighborhood in NYC. In between each pastel colored level we get poorly translated text scenes along with clearly traced graphics of various punks from movies. The awkward dialogue is in top form here, and even at this point in SNK’s legacy we can see why the slang “SNKlish” would become a thing among fighting game fans in the 90s. 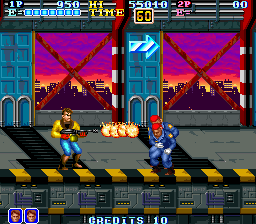 The myriad copied character designs and some odd coloring choices make for an inconsistent looking game as Mike and Jackie venture through streets filled with gang members that look like they were taken right out of The Warriors but have pink dreadlocks. Jaguar himself is shown as a lanky old man in the game’s dialogue scenes, but when finally confronted is exceptionally tall. The mix of drawn portraits and sprite work along with ones that were traced gives the entire game a slapped together look. Players don’t even get a real fight against Jaguar at the end of the game. Instead, one simply has to hit him a few times before he escapes via helicopter. If he gets away players are treated to an extra screen where he threatens to return and kill everyone.

Besides the colorful but garish characters and traced intermission imagery, Gang Wars’ soundtrack occasionally stands out in a more positive way. While the technology behind the sound is middling even for a 1989 arcade game (especially one published by SNK), some of the songs are catchy and occasionally intense. The reason is Yuka Watanabe. Watanabe has a limited resume in gaming, but has done sound design and music work on a wide variety games. Her sound can be heard in games like World Heroes, Castlevania: Curse of Darkness, Rumble Roses, and Ninja Commando. While most of her published work for ADK was in collaboration with other composers like Hiroaki Shimizu, her absence from some of ADK’s productions is noticeable in the blander soundtracks for titles like Ninja Combat and World Heroes 2 Jet.

Like with SNK’s own P.O.W.: Prisoners of War from 1989, in Gang Wars players have three buttons to work with that allow them to punch, kick and jump their way through the game. Also like P.O.W., these can be pressed in unison for various low or high attacks. There are also makeshift weapons scattered around each level. All of the weapons are very useful, but you can’t jump while holding one. Instead, pressing the jump button makes your character throw the weapon across the screen in a cartoonish lob, with it often landing in areas where it can’t be picked up again. Awkwardness is the name of the game, with equally off character designs and obnoxious voice clips. Whenever a player is knocked down by one of the game’s many ungainly foes, one of the enemies will start laughing. This laugh voiceover will get annoying before even the first level of the game is completed. 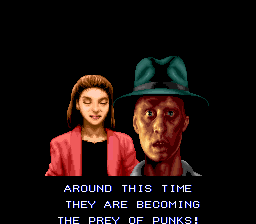 While that laugh stays the same, Gang Wars actually features a nice variety of backgrounds to fight through, though ADK’s take on New York City’s geography is a bit questionable. After the first level, players will find themselves in a military factory, a train platform that inexplicably runs tanks instead of trains, and a massive temple that culminates with Mike and Jackie battling against four giants that each have magical attacks based on the four elements in a large statuary hall with a flaming pit below it. Like many early 80s and 90s beat-em-ups, the progression from imitation NYC to massive mystic temples seems out there on the surface, but is actually just an unimaginative cloning of the 1987 arcade hit Double Dragon. While Double Dragon has aged well, however, Gang Wars is a very slapped together cash-in on it that fails to do anything to stand out on its own. SNK’s previous beat-em-up, P.O.W., had more effort put into it. SNK, while always eager to imitate in the late 80s, would typically have some unique flair to their games, but Gang Wars never rises above being a cynical rip off.

With SNK’s Neo Geo arcade and home console units coming out, most of their earlier games were quickly forgotten. It received no console ports and is not referenced in any of SNK’s later games. While SNK Playmore retains control of the many games ADK developed for them, when they released SNK Arcade Classics Volume 0 on the PSP in 2011 they did not include any of them on the compilation. However, over the following year, SNK released these same ports individually on the PlayStation Network in the US and Europe. The PSP was effectively a dead system outside of Japan in 2012, making it a more sensible way to distribute the games than releasing a physical PSP UMD for $29.99. Since these ports were released under the Sony’s “Minis” brand, they’re playable on both the PS3, PSP, and most Sony mobile devices while only costing $2.99 each. 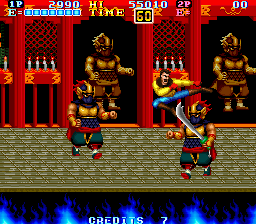 The surprising thing, however, is that thanks to this initiative, US and European players were also treated to releases of two ADK games not on the compilation, Time Soldiers and Gang Wars itself. Why these two particular titles only were chosen is unknown, though it does give players who missed its arcade release a chance to see why they never heard of it after playing through it once for to experience the hilarious absurd intermission scenes.