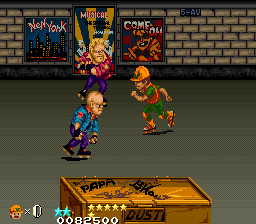 DJ Boy (sometimes known as DJ Kid) is a 1989 arcade side-scrolling beat-em-up developed by Kaneko. It’s notable for having the main character on a skateboard, something that would be used to later effect in the Teenage Mutant Ninja Turtles and The Simpsons arcade games. It’s also an interesting take on American hip-hop culture through a Japanese lens, that at times is downright bizarre and other times problematic.

You control Bob (or Tom if you’re the second player) on a quest to retrieve his stolen boombox from roller skating hoodlums. It’s unique in that it doesn’t look like a typical Japanese game – rather, it’s a Japanese company attempting to create something in an American style. Heavily influenced by 80s B-Boy culture, the game features large, colorful sprites for the time, and has a ton of character. The art-style is similar to Kageki, a 2D fighter Kaneko developed for Taito in 1988.  There’s also a pro-wrestling influence – you’ll often take a German suplex or piledriver, accompanied by crowd noise. 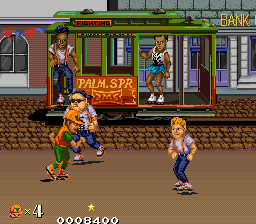 DJ Boy features both free-roam and auto-scrolling sections. In the former you can speed through the level for a while, but with a caveat – once you’re forced to stop, the foes you’ve sailed past catch up with you. The number of enemies onscreen can get overwhelming at points, so crowd control is key. There are buttons for punches, kicks, and jumping, with jump and either attack button unleashing a dropkick. Pressing punch and kick at the same time releases a spinning sweep to opponents both sides of you, and is essential when fighting some of the smaller enemies who can be below waist height. Shaking the joystick from side to side when downed helps Bob get back on his feet, and defeated bosses spawn musical notes which help rack up extra lives.

The five levels are standard arcade-fare for the time – the first level is set on the streets, before you take to the subway, a casino, a construction site, and the Wild West. What aren’t standard are some of the enemy designs, which range from the bizarre to the offensive. As well as standard thugs, you’ll fight clown robots and dominatrices before punching a tramp, who burrows into the ground and turns into a Cossack dancing Chippendale. There are fire-breathing punks, roller skating hockey players, and baseball bat-wielding thugs on unicycles. DJ Boy features good use of background elements, with enemies throwing obstacles and bombs onto the ground to damage you. In the first level, it’s dynamite from a moving tram, with extra thugs also leaping onto the street. In the subway level, child thugs throw suitcases from the top of the train, and then swing down the poles to join the fight. Piles of coins try to knock you down during the casino stage and enemies hide in barrels during the Wild West level, throwing even more dynamite at you. At one point you fight a hair metal band while the drummer flings cymbals in your direction.

The game drew criticism for one of the bosses, a large black lady named Big Mama (resembling Mammy/Blackface stereotypes) who frequently falls over, exposes her pantyhose, and passes gas. In the later Japanese Genesis port, the fart is used as an attack. This would not be the last time Kaneko courted controversy, as the later Gal Panic series tasked you with stripping women of their clothes. 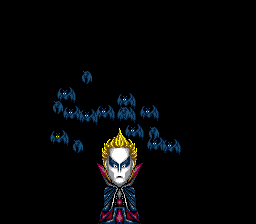 The intro features digitized speech by Japanese musician Demon Kogure in the Japanese release, and American DJ Wolfman Jack for the rest of the world. The odd thing is that the game has an image of Demon Kogure on the title screen, but they didn’t change him for the US release, so non-Japanese players wouldn’t have any idea who it was (it certainly wasn’t Wolfman Jack, despite what the text says). The music is upbeat and funky, but disappointingly not in keeping with the hip-hop theme. 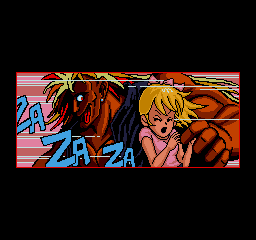 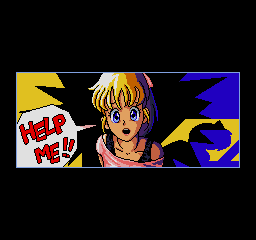 DJ Boy was ported to the Genesis in 1990 with many changes. A thinly-veiled Michael Jackson knock-off that appeared during the arcade intro has been removed, replaced with a three panel cartoon, and the digitized speech on the title screen is gone. The story was changed to the player, now named Donald J. Boy, rescuing his kidnapped girlfriend. You can no longer do the roundhouse sweep, instead punching to both sides, which is more unwieldy. The level designs are different between the various versions, with the Japanese version beginning on a promenade before the tram sequence, and the subway level being a straight run through a platform with added oil slicks and building signs as obstacles. The casino level now takes place outside the venue, with no coin machines to avoid. The clown robots have been promoted to bosses, and the Chippendale boss now just drops from the sky, with the construction level featuring a palette-swapped Bob as guardian. The penultimate level is a boss rush set against the streets at night, and the final level pits you against the Big Mama character, this time in martial arts garb, complete with ninja techniques.

New to the home port are life bars for both you and your enemies. Defeated enemies now leave coins, which can be used to buy items in between levels to increase your health, acquire extra lives, and improve your speed or power. The music actually sounds better on the console, although the sound effects are still lackluster. It’s a very tough game, likely to increase longevity, and you’re only given four segments in your life bar before being booted back out to the title screen. However, there is an easy difficulty which makes things a lot more manageable.

The Western versions change a few things. The Big Mama stereotype now has pink skin, and throws cream pies instead of passing wind, and the ninja final boss version now has lightened skin. The promenade has been replaced with a more urban looking street, the background and enemies of the subway stage are different, and bowling balls and a restricted field of view have been added, which up the difficulty. The casino stage is now auto-scrolling, and the boss rush starts in a sewer before taking you to a back alley wrestling ring,

The game received good to great reviews upon release, although Mega magazine ranked it as the fourth worst game on the Genesis. While far from a classic, it’s nowhere close to being that bad, remaining a relatively fun (if short and very hard) brawler. 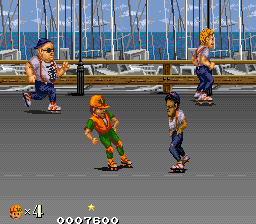 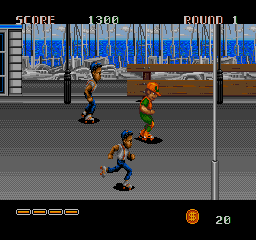 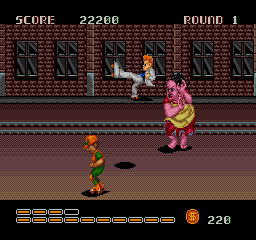 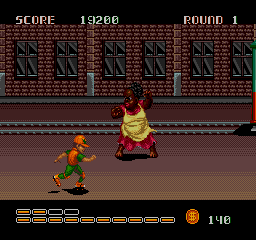