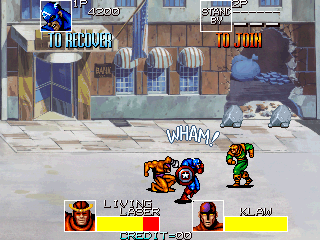 In the wake of Final Fight‘s explosive release in 1989, there was a flood of brainless beat-em-up imitators trying to get by just on their looks. Even companies becoming known for high quality 2D titles in the early 90s like SNK published a few absolute stinkers like Gang Wars and Ninja Combat. Data East joined the fray with Captain America and the Avengers, one of their most well-remembered games in the US. Captain America isn’t a rip-off of any one beat-em-up, though. Instead, it’s a focused refinement of what’s come before that still holds up today.

The introduction reveals the epic story about how Red Skull wants to take over the world, using his immense fortune to lure super villains to him and then brainwashing them to fight under him. (Why both?) The four-man squadron team of Captain America, Iron Man, Vision, and Hawkeye set off to stop him. In certain versions, four players can play at once. 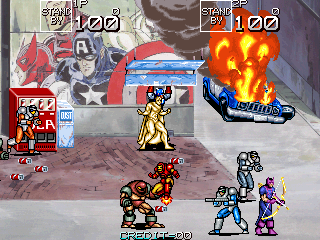 The first thing one might notice about Captain America is the outstanding voice acting. Plenty of games before it had sound clips of characters singing and screaming, but with Captain America, gamers were presented with an impressive level of clarity. How can anyone resist putting another quarter into the machine after hearing Captain America bellow, “AMERICA STILL NEEDS YOUR HELP!” from halfway across the arcade? The downside to this is that everyone sounds exactly the same, but when everyone sounds so awesome, this isn’t really a problem. The script was also written by people who were probably not English speakers, often with such hilarious and awkward lines as, “You came here to die!” and, “Puny superheroes! I’ll shut you up for good!”

Even from a distance, that bombastic voice acting tells you everything you need to know about the game. Captain America and the Avengers is unapologetically enthusiastic. Everything is extremely bright, with interludes evocative of its superhero comic source material, brief but overly dramatic writing, and cheerful music at every turn. Besides the endless swarm of drones, players will also get to confront a nice variety of Marvel villains. Whirlwind, Grim Reaper, Wizard, Mandarin, Ultron, Crossbones, Red Skull, and several others make an appearance. There are also helpful cameos by Wasp, Quicksilver, and Wonder Man.

While the bright presentation and variety of characters stand out on their own, Captain America also succeeds thanks to simple controls that still set it apart from any other beat-em-up of the time. Players walk from left to right, destroying a large army of robotic soldiers on the way to each villain. The four playable heroes all have similar abilities, with the controls only using two buttons, one for attacking and one for jumping. This may sound limited, but Data East did a great job of extracting as much action as possible from the set up. This is where the game really shines, as characters move relatively fast compared to similar games, and can execute a variety of different attacks both while standing and in mid-air. It’s also possible to double tap the joystick left or right to run in that direction, creating a lot of fun moments when multiple people are playing, where one person can quickly cover space to defend their friend. Every attack is also accompanied by comic book-style onomatopoeia, adding to the over-the-top superhero theatrics. 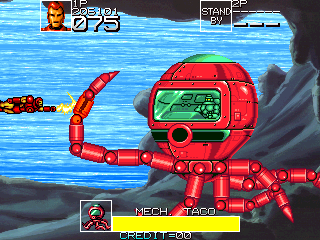 On top of that, each character has a projectile attack performed by hitting both buttons simultaneously. There’s no limitation on these, and they can be fired at any time while on the ground or in the air. This, combined with being able to quickly jump, dive, or run all over the screen at a moment’s notice, makes for a fast and very fun game in spite of the small characters and simple animation. This melds with the sincerely bright and optimistic presentation to make for a unique looking and sounding example of the genre for 1991. Players can also fight their way through Red Skull’s horde a bit more strategically if they choose, as holding down the attack button will make our heroes take a defensive stance that will block any projectiles. Mastering the timing on this will make some boss fights extremely easy.

Additionally, there are a few side-scrolling segments that play like a simple shoot-em-up, where your heroes fly automatically. Here you face off against jets and other bosses like a gigantic Sentinel. Amongst the most amusing of these is a fight against a robotic octopus called “Mech Taco”. Its goofy name obviously has nothing to do with the Mexican food, but rather that “tako” means “octopus” in Japanese, a rather hilarious language flub in a game featuring some overwhelmingly American action heroes.

This freedom of movement and versatility of attacks while in the air really sets the game apart. Unlike other superhero beat-em-ups from the early 90s, like Konami’s X-Men or Capcom’s The Punisher, there are no limits or restrictions on the heroes’ abilities. 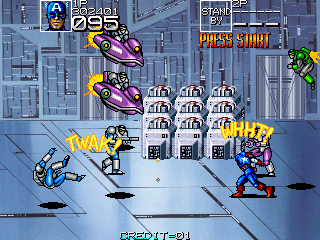 The sprites are pretty small compared to the likes of Final Fight and other similar games. Even so, they’re quite colorful, and bolstered by fantastic background art, primarily possible due to the talent of Fumie Nuibe. Nuibe has a long history of creating colorful background art for animated productions, stretching back to Urusei Yatsura 3: Remember My Love in 1985. The scenery gets especially strong during two shooter sequences, one over a city at night, and the other having our heroes flying through space to thwart Red Skull’s evil plans.

In addition to Nuibe’s backgrounds, this is also the last game Ayumi Hanimaru worked on. Before doing this job for Data East, she built a short but interesting resume of work with Telenet, having done character designs and cinematic graphics for cult classics like Last Alert, Valis, and Cosmic Fantasy. While Captain America doesn’t have the storytelling ambitions of Last Alert or Valis, the sliding comic panel-like intermissions and level introduction screens share the DNA of her past work, and are a perfect complement to Captain America‘s equally pulpy situations.

The early 90s gave us a host of beat-em-ups, some outstanding, some terrible, but Captain America is one of those games that catches lightning in a bottle. It breaks all of the genre “rules” established by Final Fight, but manages to be just as fun thanks to its fast action and sincere presentation. It’s also oddly relevant again now that we live in a world where hundreds of millions of dollars are spent every year to produce blockbuster hits that include Captain America, Vision, Iron Man, and Hawkeye. 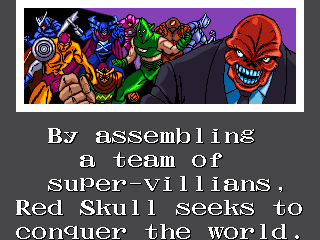 Fortunately, the arcade game was a big enough hit to warrant getting released on the Sega Genesis just under a year after its release.  This version of Captain America was released in North and South America as well as Europe, but never made an appearance in Japan itself. It’s an impressive port, with all four Avengers available to play as, along with cooperative play still in (though two player only). The graphics are substantially less detailed, but almost as colorful, and EVERY voice over is intact. The sound sample quality isn’t quite as good as the arcade game, but it’s an impressive showing just the same. The music, conversely, is actually better. Much like the Genesis port of Midnight Resistance, this game uses the Terpsichorean sound driver developed by FM wizard Hitoshi Sakimoto, giving the rousing score an extra bit of punch.

It’s also great that unlike other beat-em-up ports like Final Fight on the SNES, every level is fully intact and replicated very closely to the arcade version. The controls even have a nice improvement. In the arcades, one would tap the joystick left or right twice and then hit the attack button to do a charging attack. But at home, players just need to double tap a direction to crash through robots to their heart’s content. This version was designed by Opera House, a developer that’s been around since the mid 80s but is mostly known for their work in porting Data East’s and other publishers’ games to the Sega Genesis and SNES.

Captain America and the Avengers would fare a little less successfully on the SNES. Brought to us by Mindscape and Realtime Associates, this port is a bit underwhelming. All of the characters have made the transition intact, but the game’s backgrounds are noticeably less colorful, though slightly more detailed, than on the Genesis. Much of the game’s brief but ultra-campy script has also been rewritten in an attempt to make it more serious. It completely backfires thanks to a total lack of self awareness. For example, the first level ends with a confrontation against Whirlwind. On the Genesis and in the arcade, our heroes shout “You cannot escape!” to which Whirlwind responds “YOU will be the one ESCAPING!” On the SNES his response is, “You’ll wish you never came!”

The new dialogue is also more verbose than the original, but no new voice acting has been added. In fact most of it is actually missing along with the original writing that went with it. These minor omissions add up and hurt the game’s presentation when combined with its lackluster graphics and music. The only upside is that it retains many of the cutscene visuals, most of which were removed on the Genesis.

Still, this port is brilliant when compared to the version players were subjected to on the Game Gear and Game Boy. These versions were also developed by Realtime Associates and published by Mindscape. They’re not just terrible, but really make it clear that Data East had nothing to do with them compared to the success of their earlier collaboration with Opera House. These three ports are much more in line with many of the other mediocre licensed games published by Mindscape throughout its existence like The Terminator (SNES) and Captain Planet (NES).

In an uninspired move to get the handheld versions out quickly, each is a carbon copy of what’s seen in previous releases and the heroes and enemies have similar abilitiescexcept characters can no longer walk around the screen and can only move left or right like an average 2D platforming game. Because of the levels originating in a beat-em-up, this makes for one of the most boring and tedious action games out there. There are no obstacles to worry about, and only the most basic level design is on display, as some areas are rearranged to involve ascending a series of platforms instead of just walking from left to right. Unlike other versions of the game, these will also never have more than two enemies on the screen at the same time. It’s terrible to see such a great game reduced to a lifeless and boring rush job on these portable systems. 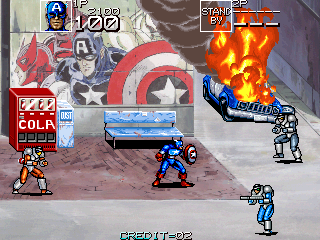 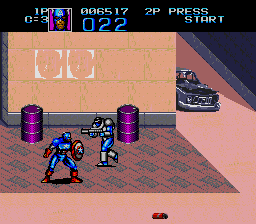 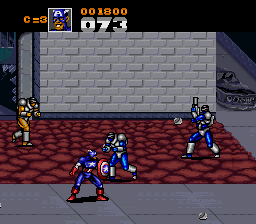