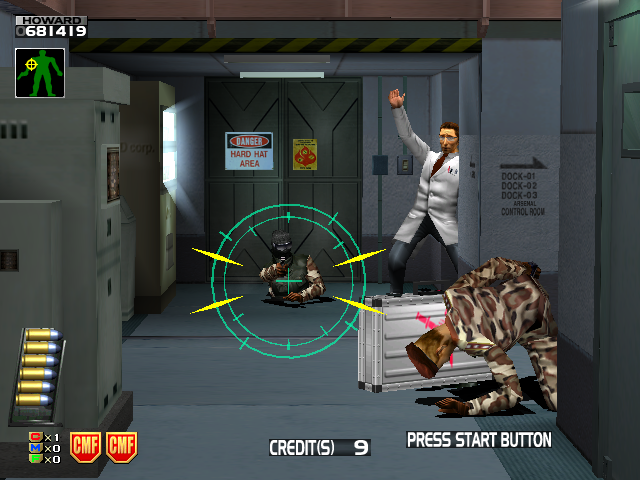 Confidential Mission is not what you’d call an imaginative game. Aside from wearing its James Bond inspiration proudly, Confidential Mission also takes lots of notes from Sega’s own Virtua Cop series to the point where it feels like a proper entry in all but name. Despite its appearance in arcades in 2000 with four different eye-catching configurations, Confidential Mission doesn’t get the recognition that many of Sega’s other arcade titles enjoy to this day. While that’s not terribly surprising, considering it’s a brief romp that isn’t widely available, it deserves a second look for its sense of style and polished gameplay.

The fact that the game is so similar to Virtua Cop is particularly interesting when you realize that the game was developed by Hitmaker (aka Sega AM3). While Hitmaker was a stalwart for Sega in the arcades, creating landmark titles like Crazy Taxi and Cyber Troopers Virtual On, they weren’t responsible for any of the Virtua Cop games nor did they share team members with Sega AM2 at the time, making it a curious source of inspiration. 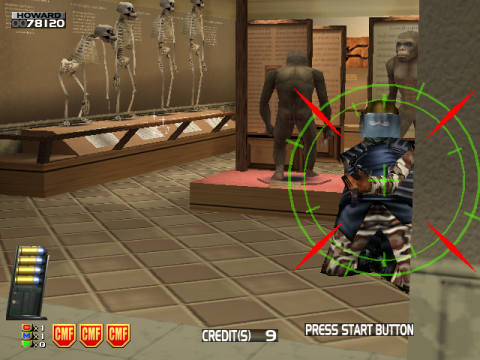 The premise of Confidential Mission is lifted straight out of the 1995 Bond film, Goldeneye. As agents of the Confidential Mission Force, your task is to prevent the terrorist group called Agares from utilizing a stolen satellite weapon for destructive purposes. Player one gets to play as the tuxedo-clad, one-liner dropping Howard Gibson, a blatant James Bond wannabe voiced by Barry Gjerde (notable for his role as Barry Burton in Resident Evil) doing his best Pierce Brosnan impression. Player two gets to play as Jean Clifford, a cool and collected agent who appears to be romantically interested in Howard, fitting firmly into the “Bond girl” archetype.

The game takes place over the course of three missions, each of which is rather long to compensate for the low overall total. Like any other lightgun game, you’ll advance automatically while shooting the dozens of enemies that’ll pop up to attack you. While you can get by on reflexes alone, taking advantage of mechanics introduced in Virtua Cop to earn extra points is the key to getting your name on the list of top agents at the end. The amusingly named “Justice Shot” bonus is earned whenever you disarm someone by shooting the hand that they’re holding their gun with, encouraging you to aim carefully and take foes out with style. “Combo Shots” are done by quickly shooting an enemy in the same spot multiple times without triggering a Justice Shot. On the defensive side of things, Confidential Mission adopts the target circle system, which shows you how long it’ll take for an opponent to shoot you. The circle starts off green and changes to red as the enemy is about to attack, so it’s vital to prioritize your targets accordingly since there’s no way to dodge or take cover. Civilians appear throughout stages, cowering in fear from the battle going on around them, and they’re an important factor to consider at all times; if you accidentally shoot a civilian, you’ll incur a significant point penalty and lose some health. Items can also be found throughout missions by shooting the environment, providing useful benefits like additional health, protection from one hit, or an assault rifle that can be fired without reloading.

As expected from an arcade game, Confidential Mission excels at providing varied and exciting setpieces as you move forward. Mission one starts you off in a museum in pursuit of an Agares agent, bringing you through various exhibits and culminating with a boss fight in an Egyptian exhibit where pillars engraved with hieroglyphics are rigged with deadly missile launchers. Mission two has Howard and Jean disguise themselves as chefs aboard a luxurious train, inevitably resulting in a chaotic shootout that takes place both inside the passenger-filled train cars and on top of the train. For the finale, you get to infiltrate the Agares base, where you’ll have to fight hordes of bad guys and ultimately try to prevent the leader from escaping via submarine. 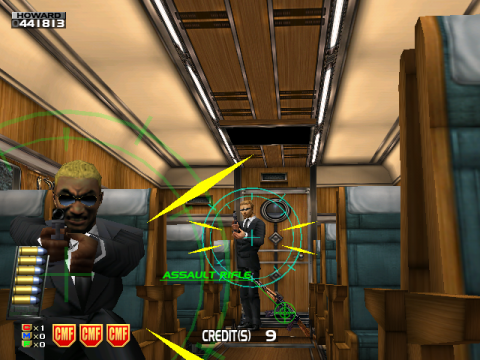 Boss fights are one of the highlights of the game, with each one being a fast and frantic duel that intensifies as the boss grows more desperate. The boss of mission two is a tank and helicopter duo that the player can creatively take advantage of by destroying the helicopter first, causing it to then crash into the tank. The Agares leader wears a strange cybernetic suit and employs a bizarre arsenal against you as he dashes around the arena, including dual pistols, robots, invisibility, and even a medieval-style sword, making for one memorable fight.

Each mission also contains multiple scenarios where you’ll be tasked with completing a certain objective within a small amount of time. For example, mission one takes you to a room filled with gas where you have 12 seconds to plug up the sources of the gas using adhesive bullets, and a scenario in mission two has you frantically shooting a train car in order to disconnect it. If you succeed, the agents will turn the tides in their favor, resulting in fewer foes to fight, whereas failing makes the duo look incompetent and you’ll have to fight more enemies or sustain a temporary handicap as a result. The most important scenario is right at the end of the game, where both players have to work together in order to aim the satellite at the escaping Agares leader. Succeeding is the only way to get the good ending and you only have one chance, so it makes for a great, cinematic moment of intense drama.

Visually, Confidential Mission certainly doesn’t push Sega’s NAOMI arcade board to its limit. The game looks similar to a preceding NAOMI lightgun game, House of the Dead 2, with its relatively sterile environments and stiff looking characters. Some environments show glimmers of potential, such as the museum’s varied exhibits, but each mission just ends up looking repetitive, especially mission two as it takes place on a train. The unimpressive visuals are partially remedied by some effective animation flourishes, such as how enemies dynamically move into position, take cover, or slide around to get the jump on you rather than just popping up like they’re in a shooting gallery. There’s also a unique animation for enemies taken down with a Justice Shot, and the mission two boss shows visible damage as the fight goes on, both of which are much appreciated touches. 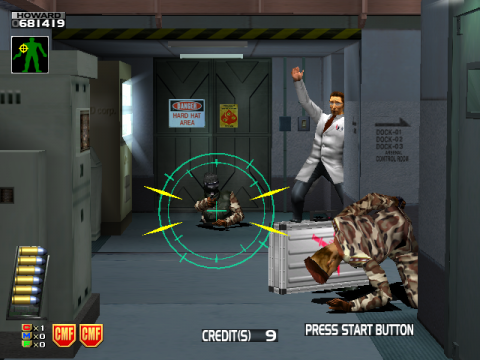 The music of Confidential Mission leans hard into the smooth jazz sound that’s commonly associated with spy thrillers, and it does a great job of fitting the tone and being catchy simultaneously. Saxophones and brass instruments are used liberally to create a pleasingly stylish vibe to the proceedings. The sound effects are great too, with every shot being accompanied by a loud, booming effect. The voice acting is charming in its roughness, with every character sounding comically wooden to the point where multiple words get mispronounced. If you love the cheesy, terrible voice acting of House of the Dead 2, you’ll be right at home here.

Confidential Mission was ported to the Dreamcast a year later, and it’s arguably the better version of the game. Thanks to the Dreamcast sharing the same technology as the NAOMI arcade board, the game’s visuals, sound and campaign are nearly identical to the arcade version. Controllers, lightguns, and even the Sega Mouse are all supported, with plenty of options to tweak like cursor speed, starting life, and hit zone sizes. Several new modes have been added to the port as well, which increases the game’s lifespan substantially. The campaign can be played cooperatively as it originally was, or players can opt into the “Partner Mode”, which assigns each player a color and color-codes the enemies accordingly. Players can only damage enemies that match their color, but shooting enemies of the opposite color stuns them for the other player to take out more easily, making this mode require far more cooperation than the regular game. There are other fun bonuses too, including the ability to change the appearance of the agents’ guns and a mode that completely removes all HUD elements.

The biggest addition is the “Agent Academy” mode, which consists of multiple training exercises that test various skills. Some examples include testing your Justice Shot and Combo Shot skills, a simple but challenging test of your reflexes, and exercises where you need to shoot targets in the correct order. Despite being purported as training exercises, the Agent Academy contains the hardest content in the game by far and will likely be where completionists spend most of their time. Luckily, completing Agent Academy is very much worth it, as doing so unlocks the “Another World” mode, which is a remixed version of the main campaign that alters enemy layouts and slightly toughens up the bosses. That’s not all though, as completing Another World unlocks even more brutally challenging Agent Academy missions for you to do! 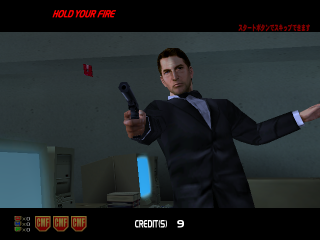 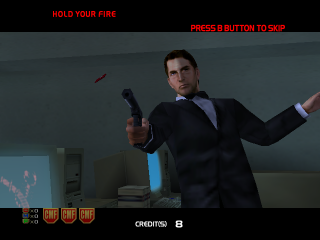 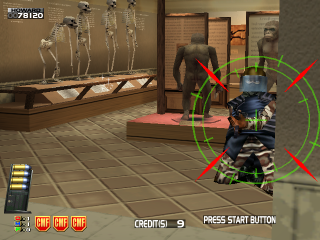 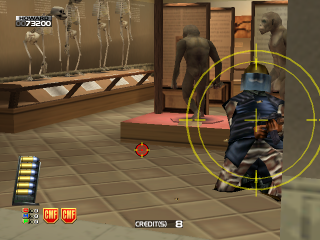