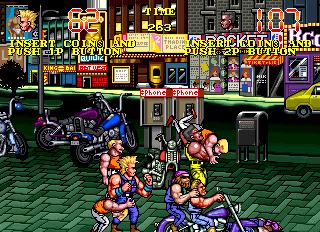 Of all the developers out there, Technōs has probably had the most significant impact on the evolution of beat-em-ups. They arguably invented the genre with Renegade, defined it with Double Dragon, and (arguably) perfected the genre with River City Ransom. All in all, Technōs produced a dozen different entries in the beat-em-up genre, with four in their Double Dragon series and six in their Kunio-kun / Nekketsu High School series. After 1987 or so, Double Dragon and Nekketsu High School became Technōs’ primary focus, and they made most of their games within these two franchises. So it was even rarer that they developed a beat-em-up completely outside of these series. On the two occasions that they did we got two very different games – the wildly experimental Shadow Force, which is surpassed in its novelty only by its obscurity, and the much more popular The Combatribes.

The Combatribes is essentially a much superior version of Renegade. You move through small stages consisting of generally only one or two areas, but with large groups of opponents in each. After defeating every enemy, a much tougher boss will appear along with a few more lower powered drones. As opposed to most beat-em-ups, defeating the boss will not automatically end the level, and you have to beat each of his allies before progressing. Regardless of how many areas a level has, they all take place in the same location – a dance club/bar, fairground, or baseball stadium – and you automatically move along after finishing with a group of foes. 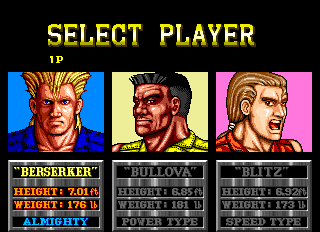 There are three characters in the game that you can choose from – Berserker is the balanced guy, Bullova is the tank, and Blitz is the high-speed-low-power character. Somebody at Technōs must have thought they were being clever with the characters’ names all beginning with the same letter, but it just makes the game seem that much more ludicrous. There are two versions of the arcade machine – a version for two players, and another for three at once.

Plot is not exactly The Combatribes‘ strong point, but that’s really a moot point in a beat-em-up. Your quest to kick ass eventually takes you to the top floor of a skyscraper, where you meet a man who looks like a generic crime boss character. You chase him to the roof, but he escapes in a helicopter. After tracking him down to a pier and defeating his lackeys, somebody from within the limo behind him blows his innards out. He falls dead and you face off against a woman who appears to have gone Super Saiyan or some kind of other crazy nonsense. This doesn’t make a damn bit of sense, and Technōs probably didn’t care in the slightest – they didn’t even bother to give the game an ending. Instead, you are just taken right back to the title screen. 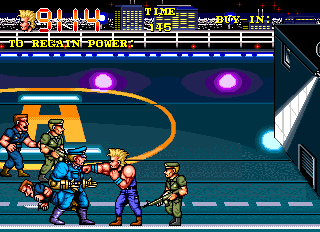 The Combatribes‘ structural simplicity and minimal plot don’t make for anything fancy, but that’s obviously intentional. The fact that Technōs was revisiting ideas they explored in Renegade shows that they were trying to create a game that focuses exclusively on what the whole point to the beat-em-up genre has always been about – beating the living crap out of people. It accomplishes this goal pretty well – it isn’t really a masterpiece of the caliber of Technōs’ best entries in the genre, but it is a nice diversion if you’re just looking to beat down a few nameless thugs.

This back-to-basics approach is also reflected in the game’s movesets. While combat is still more complex in The Combatribes than in most beat-em-ups, it’s more simplistic than most of Technōs’ other installments. You have a punch and a kick, each performed with a different button. Double tapping forward will make your character run, which also functions as a way to knock down enemies. Pushing either button while running, or both buttons while not, will execute a running attack. Berserker and Blitz will become airborne during their running attacks, but you can’t actually jump. You have two different throws – each executed by pushing a different button after grabbing an opponent – but you can’t throw bosses or a few normal foes. If you push any button when there are two enemies very close to your character on opposite sides, you can bash their heads together – it’s difficult to get this move to work, but it’s easily the coolest move in the game. There aren’t any melee weapons, but there are a few items here or there that can be thrown. After any item is thrown it will explode – even if it’s something that it makes absolutely no sense whatsoever for it to do so, like a pinball machine. 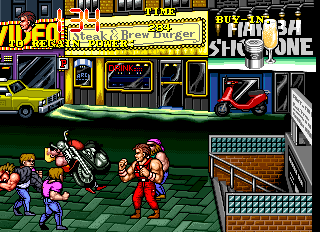 To make up for these small movesets, you have four different attacks that you can perform against downed opponents. If you approach any downed foes from just behind their feet and push kick, you will jump on their torso. Whereas, standing over them and pushing kick will kick them in the gut. If, instead, you stand over them and push punch while holding the joystick in the down position, your character will sit on them and bash their head into the ground – a mere three of these will defeat most normal foes. Lastly, standing by their feet as they lay on the ground and pushing punch will make you character grab them by their ankles and swing them around. This last move will knock other enemies down, so it’s excellent for crowd control, and possibly the best move in the game. The swing-by-the-ankles move is also the only attack against downed opponents that each character does differently – Bullova will make five complete spins, Berserker will make three, and Blitz will make two. You can jump on the back of the first boss, but otherwise each of these four attacks are only possibly against normal enemies.

This game was obviously meant to be a quarter muncher, and its biggest flaw by far is its difficulty. It’s more or less impossible to avoid getting hit by enemies, and completely impossible to avoid getting pummeled by bosses – the last couple of which are especially challenging. You can continue after getting killed or just buy more health by inserting another credit. However, its difficulty is so astronomical that you are going to have to spend an inane amount of money to have even the slightest hope of finishing the game. Probably due to a programming oversight, the game will only count your health up to 9999, and if you put in enough credits to go higher than that it will begin again from zero. It would cost over thirty dollars to do that, so nobody is likely to ever try it, but on the off chance you make that mistake, you’d lose all thirty-something dollars. 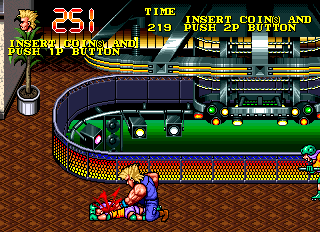 The Combatribes has fair music and graphics, but they’re really nothing memorable or noteworthy. The best thing about its presentation is the few instances of self-referencing in the background, like signs that say Technōs or a screen in the dance club that mentions Technōs’ obscure game Block Out. The best looking of these by far is a giant sign that says TECHNOS LAND at the fair ground. 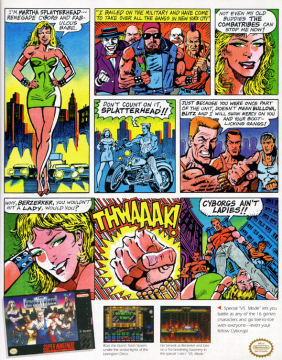 A lone port was made for SNES where blood and weapons have been removed, you can change characters after continuing, and each levels consists of a lone area, but it otherwise plays accurately. It also attempts to flesh out the plot a bit. In this version, all three playable characters are cyborgs. You goal is to rescue a hostage from a criminal organization called Ground Zero. There’s brief dialog exchanged with bosses before and after fighting them, as well. That final boss is named “Martha Splatterhand”, who’s also apparently a cyborg. Long time magazine readers may remember an advertisement for this game where Martha was bragging about her evil scheme, and then taunted our heroes with “You wouldn’t hit a lady, would you?” Then they smack her in the face and respond “Cyborgs ain’t ladies!” There’s even an ending – after Martha Splatterhand thanks the heroes for stopping her horrible crimes, Berzerker takes her corpse and the trio walk away. Then the game says “Once Martha was defeated, The Combatribes left… never to be seen again…”. There’s some mild censorship in the American version of the game – the names of a couple enemies and level five have been changed, and the bosses are bloody in the Japanese version, and completely bloodless in the American version.

Since the SNES port was made a few years after the arcade version, when one-on-one fighting games were the Big Thing, Technos gave it an extra mode that plays like a fighter. Only the three main characters are available originally, but the bosses become available if you enter codes that you are given after beating each level in the beat-em-up mode (9207 for every character). In the fighter mode, the main characters can block by holding L and R at once, which will perform a special for bosses. After choosing your character you get to select an arena to fight in. Each of its three arenas has its own hazards, like in the first two World Heroes games. It’s all a pretty good idea, and maybe worth giving a chance, but The Combatribes‘ combat system doesn’t really translate to the context of a fighter very well. The Rushing Beat trilogy of beat-em-ups also tried this idea with even worse results.

It’s possible that The Combatribes inspired Technōs’ other beat-em-up Shin Nekketsu Kouha: Kunio Tachi no Banka – it’s often said that the look of that game and the feel of its combat resemble vastly modified versions of those from this game – but that game completely lacks The Combatribes‘ Renegade-style gameplay. It’s a pretty good game and all, but it would have been nice to see what else Technōs could have achieved with its premise – given how much they were able to improve over Renegade, it seems like the third time could have easily been the charm. 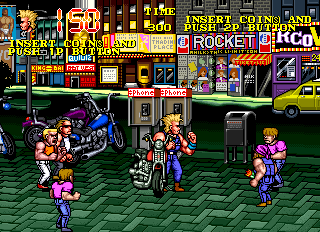 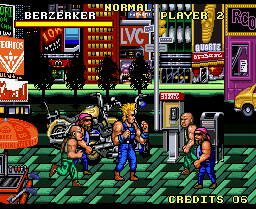 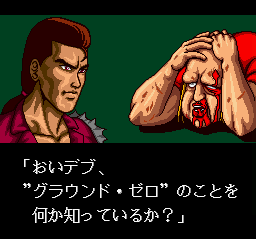 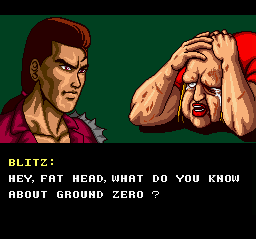 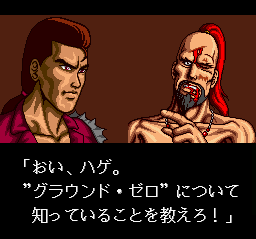 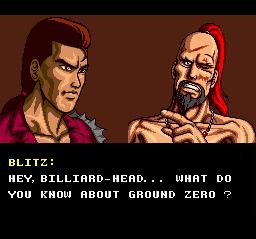 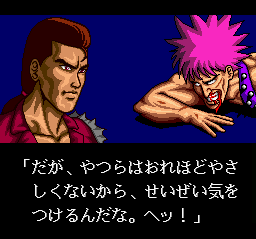 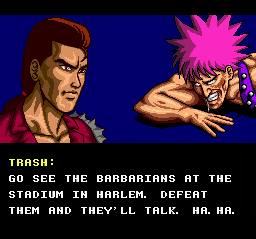