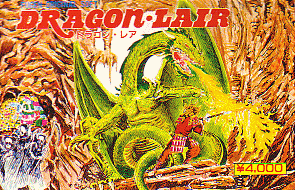 If you’re interested in the early history of RPGs, you may have read the story about the Westerner who introduced the Japanese to the genre. That narrative is not entirely false, but this article is not about Henk Rogers’ The Black Onyx. Dragon Lair by Fugen Electronics was covered in the December 1982 issue of the monthly magazine Technopolis. This gives it a much stronger claim to being the first, while its status as a Japanese game is even more debatable than Roger’s work. The PC-8001 version cryptically credits “Brother Sun” and “Sister Moon”, but on Fujitsu FM-7 computers it is revealed that the game was actually written by the couple John and Patty Bell.

John Bell was the founder and president of the California based software house Crystalware and published a variety of games for North American home computers between 1980 and 1982, including several primitive action/adventure/RPG hybrids. The Japanese manual for Dragon Lair proudly introduces it as “Fugen Original Soft” and none of the known Crystalware games quite match up with it, but the company’s catalog is not entirely preserved, so it’s impossible to be sure if it was really made exclusively for the Japanese market. House of Usherfrom 1980, loosely based on the classic short story by Edgar Allan Poe, most closely resembles Dragon Lair, but features slightly different mechanics and a completely different map. 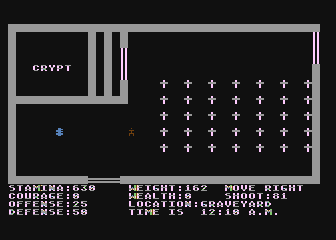 Equally unknown is John and Patty Bell’s relationship with Dungeons & Dragons or any earlier computer role-playing games. Their output was fairly unique at the time, but Dragon Lair seems at least partly inspired by Automated Simulations’ Temple of Apshai, with its room-by-room progression and semi real time combat. The games also share an innkeeper dialog that asks if you want to buy weapons and armor before the quest, and both use the same order for the different types of equipment.

But Dragon Lair is a much simpler game than Temple of Apshai. There is no initial character creation and only the attack and defense values are determined by the equipment you bring into the lair. You always start the game with a hundred points of health, as well as a hundred energy points, of which three are deducted each time you move on to a new screen.

The inventory is kept plain as well: Items like healing mandrake roots and white mushrooms simply increase health or energy immediately, and you can only exchange weapons on the spot when you find a new one. On the other hand, the game does maintain a list of found treasures and keeps track of three types of coins: copper, silver and gold.

The point of the game is to walk around exploring the rooms and amassing loot, which is represented on screen by thick horizontal bars. Yellow bars are always weapons or armor; the purple ones contain coins or trigger a prompt asking if you really want to take them, which is rewarded with either treasure or trap. An X marks the spot for the really valuable stuff, including your target, the Golden Dragon.

Green items, finally, can be anything – usually they’re worthless junk or yet more traps – but they also provide the only opportunities to replenish your health and energy. The only way to find out is by trial and error. While the game always starts the same way, the content of treasures seems to get shuffled around as you move from room to room, so memorization doesn’t help a lot.

But surely Dragon Lair could hardly be called an RPG if it didn’t feature many ways to get killed aside from just collapsing with fatigue after tripping into too many traps. Similar to Crystalware’s House of Usher, many rooms are filled with red spots as placeholders for critters like bats, ants, or venomous spiders. If you walk into one, you get bitten and loose a chunk of health, but they never move around and you can easily kill them with arrows if they ever block your way. 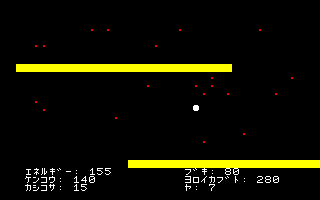 More serious adversaries are shown as moving red circles. Right at the entrance you encounter none other than Dracula, but he cannot reach you because of the river in the middle of the screen. When there is a clear way between you and a monster, though, they rush towards you at once, accompanied by bleeping noises. These sound effects slow down the program and render the controls terribly unresponsive, but it’s possible to run away or attack them by mashing the “A” key when they get close.

Combat is over quickly either way – most enemies go down in one or two hits when you’re properly armed and otherwise they usually kill you within seconds. If you wear a lot of protection they have to get through that first, adding one or two vital opportunities to strike. Defeating enemies is rewarded with experience points, but they never seemed to affect any of the other stats, so either you need a whole lot of them or they have a more subtle impact on calculations.

You can search any room for hidden passageways with the “L” key, which may lead to single treasure rooms or whole new segments of the lair that are home to the most precious artifacts but also the most dangerous creatures. The abstract maze comprises almost 150 rooms with many dead ends and alternate passages. At several points the screens don’t match up correctly, which is not only confusing but can also cause the game to crash when you accidentally walk outside of the dungeon bounds through one of the many gaps in the walls. Too much exploration isn’t always advisable either, as eventually the program runs out of memory, at least on emulators.

Once you’ve found the Golden Dragon, you can leave the lair at any time by pressing “W”. The reward for your effort is a dry text message displaying your final score. The Golden Dragon is always located in roughly the same area, so the only incentive to play again is trying to figure out how much wealth you can accumulate before the game crashes. 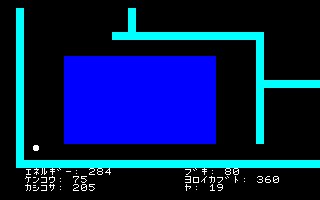 The prospect of Dragon Lair‘s possible impact on the Japanese game programmer scene is intriguing, given the country’s early tendency towards the action variety of the genre, but it’s hard to tell whether anyone of note even played it – it is certainly never mentioned by anyone. Fugen Denshi published at least one other game by John and Patty Bell, the space simulation Star Quest, but went out of business before the end of 1983. Crystalware went under the radar around the same time, but resurfaced in the late nineties with a vaporware project called Clonus 2049 A.D..

This article is part of JRPG Chronicles. Watch on Youtube!