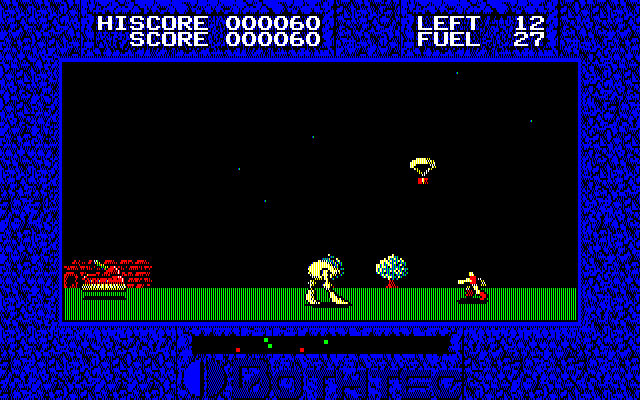 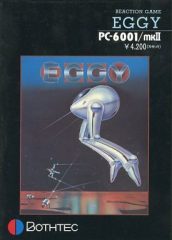 During the early days of computer gaming, publishers often found products by holding game development competitions. Enix was one of the first of these and found great success, so when Bothtec was formed in 1985, they did the same thing. The first result of this contest was Eggy, developed for PC-6001 by Atsushi Aoki and then ported to other platforms. 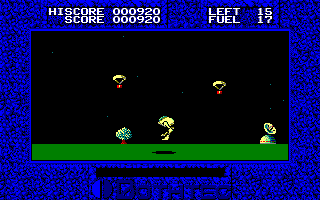 Eggy is sort of similar to the classic games like Choplifter and Defender, except featuring a bipedal robot. Taking place on an infinitely looping horizontal plane, it’s your job to guide your little mecha and grab supplies that are being parachuted from the sky. (The robot is technically named Ena – Eggy is the name of the planet you’re defending.) The rub of it is that while you’re equipped with machine guns, they can only be used when airborne. And double weirdly, you don’t jump by pressing Up, but rather holding Down for a moment or two, after which case you’ll take a leap (with your height determined by how long you squatted). Not only is this useful for leaping over enemies and obstacles, and grabbing parachutes in mid-air, but also raining bullets down on enemies.

However, your fuel meter acts as both a timer and a life meter – once it runs out, the game is over. You can replenish your fuel, however, by damaging certain enemy walkers called Zorums with a single hit, then walking over their flashing bodies. Similarly, there are humans running on the battlefield; you’re not supposed to attack them, but if you do kill one, they’ll transform into a Zorum, after which you can damage and harvest them again. It’s an interesting design mechanic to having your player character being so weak but able to regenerate themselves almost at will, as long as you’re careful enough not to mindlessly kill everything. After a certain number of parachutes have dropped, you get bonus points based on what you grabbed and how many civilians are left alive, before proceeding to the next stage.

Eggy is only really known among Japanese PC fans since it was never ported anywhere else. It is referenced by digital download service Project EGG, which is the Japanese equivalent of a service like Good Old Games. Technically the acronym “EGG” stands for “Engrossing Game Gallery” but it also uses the Ena from Eggy as its mascot, fitting since the service was originally created to sell Bothec’s old games.