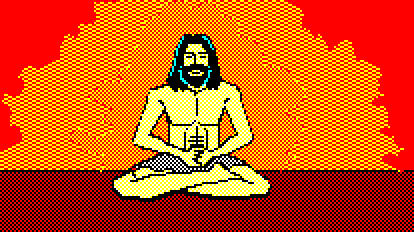 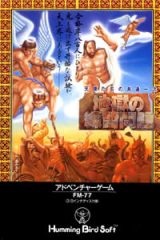 The premise of Jigoku no Renshuu Mondai (the official English translation is “Exercises in the Hell”) by Humming Bird Soft is nothing if not unique – you are an angel-in-training sent into hell to perform a variety of duties, which, like many old text adventures, largely amounts to a treasure hunt to score points. The underworld is not only filled with blood red lakes, needle forests and blazing infernos, but also the spirits of several celebrities and historical figures. Yes, during the course of your adventure, you’ll run into Napoleon Bonaparte, Adolf Hitler, John Wayne, John Lennon, Marilyn Monroe, Cleopatra, Ryoma Sakamoto (a famous samurai), and a figure who appears to be Jesus Christ but is addressed only as “senpai”. You’ll also meet up with Count Dracula, for some reason. 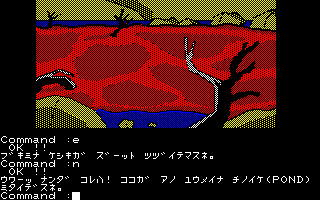 Upon meeting some of these figures, they’ll quiz you about their time in the living – get it right and you’ll potentially get a vital item; get it wrong and they’ll either walk away or flat out kill you. The questions are, for the most part, very easy – Who was John Lennon’s wife? What kind of movies did John Wayne star in? – and only serves to highlight how strange this game is. Some act a little differently – Ms. Monroe will ask you if you think she’s pretty (say yes to get a ring), while Cleopatra will attempt you hit on you (say no and be prepared to use that ring to defeat the snake she turns into, unless you insulted Marilyn). The interactions with these folk make up a majority of the game, although there are a few other obstacles, like getting swallowed by a giant ogre and trying to figure a way out that doesn’t involve getting digested. 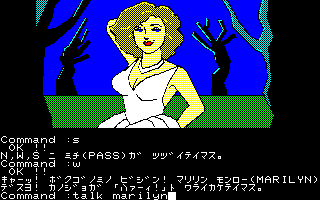 Functionally, the game is similar to titles from Penguin Software like The Quest and Translyvania, which had been localized for Japanese computers by another company called Starcraft. The color visuals aren’t the best, but they do a decent job of recreating hell, and there are even some small animations, like blinking eyes, for the various goofily drawn characters. There’s about 50 areas in total with a number of empty screens, but it’s also fairly non-linear, and not particularly long. Although the game is in Japanese, all text entry is handled in English, with all necessary nouns given an English translation in the text so you know how to address it. Incidentally, if you type “fuck” at any point, you’ll insult the game so badly that it sticks it tongue at you and forces you to start over. 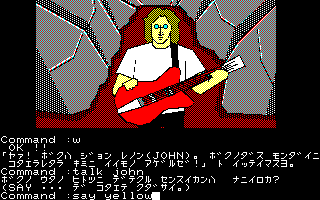 The only real sticking point comes with the random events – the characters that show up at one part are random, and only one of them (Hitler, strangely enough) has an item you need, but you either need to keep leaving and re-entering the screen until you meet him, or simply restart from scratch to rejigger the random number generator. Two screens are also randomly flooded with flames, and if you’ve entered them before you’ve learned the firewalk ability from the hermit, you’ll be killed. Functionally it’s not any worse than most similar games of the period though, and the bizarre premise – the presence of Hitler makes sense, but by what loopy metaphysical standards was John Lennon doomed to hell? – gives it an appropriate amount of insane kitsch value. 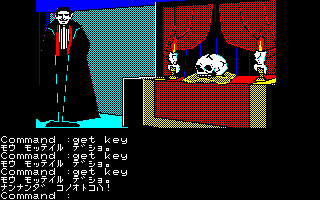 Links:
Retro AVG Guide Full walkthrough in English, although you’ll need to understand a bit of Japanese to figure out the quiz answers.