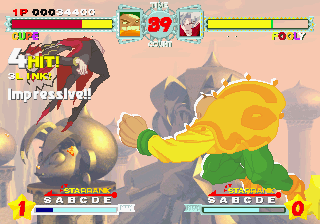 Sunsoft’s third and final fighter (although it was technically developed by a company called Santa Claus) is quite unlike its predecessors – or any other 2D fighter, for that matter. In Astra Superstars, all of your characters are fighting in mid-air, like in Dragon Ball Z. In spite of this change in dynamic, the gameplay is somewhat similar to Waku Waku 7. Astra Superstars still uses a bright and colorful art style, although it trades the manga/anime influence in favor of clean and simple designs that seem right out of a children’s book.

This caped guy, despite the stupid name, is your pretty standard super hero.

The main heroine is a fairy who wears a shirt that exposes more than just her midriff.

This self proclaimed “gangster” is a demon with an assortment of electrifying moves.

Coco is an Arabian princess who can summon magic seals to do damage, and summons a gigantic peach out of the sky as a super attack.

As his large stature may suggest, Cupe is Astra’s “slow but extremely powerful” character.

Astra Superstars was made by a company called Santa Claus, and Rouge seems like she would be their mascot. She attacks with a gigantic bag of goodies, and does damage with an assortment of toys.

This Japanese warrior wields a sword and has the ability to momentarily transform into an oni severeal times the size of the screen.

Stella is a witch who prefers projectile based magic spells over close combat.

The final boss of Astra Superstars is a huge demon far larger than any of the other characters. All you need to do is dodge his attacks and swipe his face. Because of his size, he’s an unplayable character.

Bonus-kun’s shoes have been filled by Test-kun, a stick figure drawn in a thick blue outline, presumably created as a template before any of the character sprites were finished. He’s technically the last boss, and like Bonus-kun, has dragon punch and hadoken maneuvers.

(Not listed are “My Angel” and “My Devil,” as they’re simply mirror matches for the existing roster.)

In combat, by default the characters float at mid-level, although they can quickly swoop downward or zoom upward before returning to the center of the playing field. Like the previous Sunsoft fighters, the scaling camera helps keep control all of the action, which can get pretty chaotic. Like Waku Waku 7, you can slam your opponent and send them flying across the stage – hit them enough and they’ll literally bounce around like a pinball. Combined with the glowing auras surrounding the characters, the flashing colors during super moves, and the text spewing all over the screen, Astra Superstars is like an epileptic’s worst nightmare. In Story Mode, before each match, you’re offered one of dialogue choices, which can “Heat Up” or “Cool Down” your opponent, turning them stronger or weaker.

The controls are fairly simple – each of the six buttons on the Saturn pad executes a different move. Technically, there are no special moves, so there are no real controller inputs, although many of the regular attacks are still pretty powerful. There are a few special attacks that drain the star meter – pressing A and X simultaneously will temporarily increase your power, B and Y will execute one of your character’s super moves, and C and Z will execute the other. Other than all of the dashing moves, this is pretty much all you need to know to play Astra Superstars. Combos are easy to pull off for most characters, and many of the stronger attacks will sending them flying upward or downward. You can then chase them to continue the combo, similar to the Air Combos found in Capcom’s Marvel Vs. series. It’s pretty button-mashy, but it’s a lot of fun.

Although all characters can block, all defenses can be easily guard crushed, which makes dodging all the more important. The system promotes aggressive gameplay, since characters regain small portions of their life when not being attacked (similar to Vampire Savior), and you’re graded during battles on your performance, which affects the judgment if the time runs out. The fighting’s all a bit simplistic and more than a bit spastic, but it’s still a ton of fun watching everything in motion. The character sprites are mostly colored with pastels, and stretch like elastic when getting hit. The backgrounds are generally kind of boring, except for two stages set against the ocean, with almost photorealistic scrolling water.

Astra Superstars was originally an arcade game for the ST-V, and was ported late in the Saturn’s life. Due to its cult popularity, it’s very much sought after, with copies of usually ranging upwards from $150, making it one of the pricier games on the system. At least it’s not as expensive as Radiant Silvergun or Psychic Assassin Taromaru, but it’s a bit questionable for a game that’s so shallow and easy. It’s one of the first 2D fighters to run in high-res mode, although since the viewpoint is so zoomed in, it doesn’t really look much different from any typical sprite based fighter at the time. You can really only tell by looking at the HUD. It also requires the 4 MB RAM cart, and other than the initial load times when booting up the game, there’s only short match-up intermissions between battle.

King of Fighters ’98, The
Night mode