However, there was a series Jaleco had going on for three installments on the SNES, with each one somehow reaching America. Rushing Beat, a trio of action-packed brawlers, was very much done in the style of Final Fight and/or Streets of Rage. The first game basically WAS Final Fight and did little to distinguish itself from other similar ripoffs, but the second game added some unique touches to set itself apart from the rabble, and the third offered multiple paths, an interesting story, and other twists here and there. Taking place a few years into the future (of when the games were made, anyway), the first title is simply about busting on drug smugglers, but the second game actually deals with fighting a legion of clones and the third introduces a rather dark plotline involving genetic experimentation and the evils of technology. They were mostly overlooked as sidescrolling beat-em-ups were chiefly popular in arcades, and their popularity was often overshadowed by the growing fame of one-on-one fighters building from the Street Fighter II craze of ’91. It’s unfortunate that the Rushing Beat games never gained much attention, as it’s definitely a trilogy worth checking out for fans of the genre… well, the latter two are, anyway. The first game? Well… let’s get around to that.

(Note: The games will primarily be referred to by their Japanese titles for most of the article to keep them consistent with each other. Plus, their American titles are pretty stupid.) 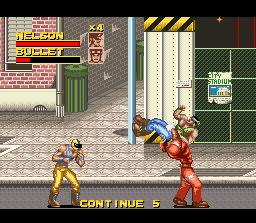 The first installment of any budding game series is either looked back on in one of two ways: Still the best after a legion of sequels, or a rough game whose jagged edges were smoothed and refined over its successors. Rushing Beat falls hard, without a parachute, into the latter category. It was dubbed Rival Turf! in America (unnecessary exclamation point included), with one of the most horribly ridiculous covers in all of gamekind… and sadly the most amusing part of the whole shebang. The game is not about gangsta teens at each others throats like The Warriors as the American box may suggest. Instead, it’s your standard action film fare: Two law enforcement officers take on a drug cartel all by themselves by systematically beating the snot out of every gang member and working their way up to thrashing the kingpin. They start out kicking butt along the east coast and north of the Mexican border for the first three stages before taking a helicopter to South America for the latter three levels. The names differ depending on which version you’re playing, with Rushing Beat first taking place in the slightly futuristic Neo-Cisco and Rival Turf! starting out in just plain ol’ San Francisco.

The protagonist is Rick Norton, a 26-year-old police officer who bears an incredible semblance to Final Fight‘s Cody, except with slightly darker hair and a bomber jacket. His sister, Maria (Heather in Rival Turf!), has been kidnapped by the anonymous evil organization, and while it’s personal, Norton still asks for help. Rival Turf! assigns completely boneheaded names to our heroes, wherein Norton is now called “Jack Flack” of L.A. police.

His partner in anti-crime is Douglas Bild, a 44-year-old uniformed veteran whose choice of attire actually makes him look eerily like Street Fighter’s M. Bison. No one knows if Bild is wearing the standard Neo-Cisco police uniform unfortunately modeled after one of the most notorious fictional dictators ever, or if it’s just his thing to cosplay as evil characters despite ironically being a good guy. In Rival Turf!, Bild is now Mexican soldier “Oozie Nelson,” short for Oswald according to the manual. Still, Oozie?! 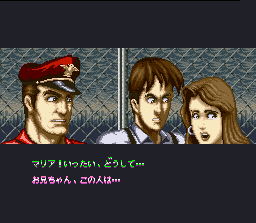 Anyway, one look at them should tell you that Rick is the faster player, while Douglas trades some speed in for more strength.

The gameplay is what you’d expect of this mold: Beat up punks, move right, repeat ad infinitum. Most brawlers add some sort of interesting design factor or gimmick that makes them stand out, but Rushing Beat honestly doesn’t have a whole lot going for it. You have your basic multi-hit combo, your jumping attacks, the ability to grab and throw, and dash attacks done by running while holding either shoulder button (with “running” merely being your character’s normal walk animation sped up fast, cheesily enough). There’s also the ever-useful invincible bailout attack that shrugs enemies off, but unlike most other games where a small portion of your lifebar is used, it takes up points that you gain for each thug you defeat. It feels less innovative and more limiting, so your main method to retaliate against overwhelming enemies is the Ikari/Angry Mode, a state of invincibility and raised strength achieved by being attacked too much. While this burst of power is nice and tilts the odds slightly in your favor, you can really only do it once per life unless you pick up a health item, coming in the form of soda (possibly beer?), sushi, or classic fully roasted lying-on-the-ground chicken. Naturally, there are also weapons, but they really only come in two varieties (throwing or striking) and don’t add much to gameplay. 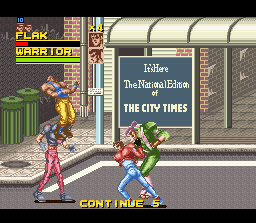 The enemies you fight are fairly standard, with half of them lazily being palette and/or head swaps of the other half (though to be fair, most beat-em-ups did the same thing). There’s the basic dime-a-dozen punks, tall gangly jerks who kick you a lot or toss dynamite, large martial artists who rip off the hurricane kick from Street Fighter, smaller martial artists whose jump kicks are infinitely annoying, fat guys who can squish you beneath their elbows, and big musclemen who obnoxiously grab and throw you around. They’re fairly boring and they could stand to have a bit more variety among their ranks, but the bosses are a bit more outlandish, such as the Arabian swordsman or the boombox punk who uses an airhorn to call in a car to run you over. Naturally, there’s some cheapness like the obligatory ninja boss who jumps around a lot and the luchador who spams spinning kicks repeatedly. The fourth stage boss, Captain, is definitely the worst, able to kill you in a mere two grab attacks and moving about ridiculously fast, being incredibly hard to hit despite being such a fat bastard! Not even the final boss, Kintark (Big Al in Rival Turf!) is quite as bad as captain, though he’s no pushover and can activate his own Ikari mode to become invincible.

That’s basically all that can be said about how Rushing Beat works. It is the most basic type of brawler that can possibly exist, and aside from the minor boost of the Ikari mode, there’s really nothing this game has that is unique or hasn’t been done better by any similar Final Fight clone. If anything, it has a rather amateurish overall feel with several components feeling a bit off-kilter. The character animation is somewhat jerky, the hit detection is a bit loose (beware of enemies that can grab you in particular) and your heroes seem to take a bit more damage than they should from attacks. This game gets a bit cheap at times and it can take a bit of effort to beat it with the four lives and five continues you’re given. Ikari mode makes things more manageable, but for some reason, it can be toggled in the options menu and is set to “off” by default. Furthermore, the game lacks polish and isn’t all that much to look at or listen to. The backgrounds, while not abominable, have a bit of a washed-out look to them and aren’t exactly centerpieces of the SNES’s graphical capability. The music’s pretty bad with unremarkable music that loops over after less than a minute, though the first stage theme is admittedly catchy in a somewhat annoying way. 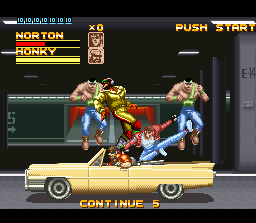 If there’s any saving grace for Rushing Beat, it’s the simple factor of two-player mode. Nearly any game’s fun with a friend, even something as white-bread as Rushing Beat. It might arguably be a bit harder, as you still only have limited continues which are shared amongst you, but at least you’d be enjoying the game the way it’s ideally meant to be played. You don’t even have to fight with your partner if both of you want to be the same character. If both characters choose Norton or Bild, the second player will show up as a blue-clothed rendition of the same character. There’s even a decidedly odd Versus mode where you can pit Norton and/or Bild against each other in a really bizarre arena that apparently takes place in front of a galactic supernova with Mode 7 rotating effects. It’d actually be pretty cool if that were somehow featured in the main game, though it feels vastly out of place against the rest of the game’s down-to-earth design.

So that’s the first Rushing Beat in a nutshell. It’s not a great game, and there are quite a few similar games on the SNES alone that are far better. Then again, it’s not all that bad either even if derivative and uninspired. It IS at least a somewhat better game than the dreadful SNES version of the first Final Fight. Its difficulty is slightly fairer and it allows for two-player carnage, a feature sorely missed in Capcom’s botched port. That being said, there’s not much reason to play it unless you like the later two Rushing Beat games and want to give this one a shot out of curiosity. The original Japanese version is decidedly preferable, as its names for the heroes and enemies are decidedly less stupid, and it allows you to adjust lives and continues in the options menu to make things easier or more difficult. There’s also an intro scene where Norton learns that his sister is kidnapped and the ending is slightly longer, but this won’t mean much to anyone unable to read Japanese. Not much else was changed when it became Rival Turf!, though… no one can be blamed for wanting to import it for the sole reason of less embarrassing boxart.