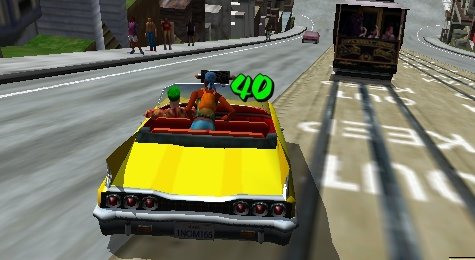 The Crazy Taxi series was a breath of fresh air to many. Sure, it may have seemed like the standard gimmicky driving game that seemed to flood arcades in the late 90s (and are still prevalent today), but there was a lot more to Crazy Taxi. It was a simple game with pure arcade quality gaming about a seemingly mundane job: taxi cabbing. The name is simple but to the point: it’s taxi driving but with a crazy twist, seeing as you don’t have to follow the rules of the road (and in later games, the rules of gravity) to get your customer to their predetermined destination.

With great atmosphere, music perfectly fitting the game, insane amount of maneuvers (including the Crazy Drift that helps you turn on a dime or the Crazy Dash to have a sudden boost to speed past traffic), and a great level design, Crazy Taxi sports tons of playability. Unfortunately, the appeal began to wear off, as each subsequent game failed to improve much on the formula. So after releasing a few sequels, it appears as though the game became stale to best. 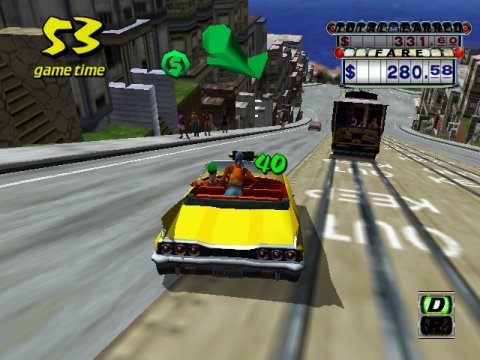 Back in 2001, it was announced that producer-director Richard Donner had acquired the rights to make a live action film based on the Crazy Taxi license. This seemed a bit odd, seeing how there is absolutely no story whatsoever in any of the games. The year after, word got out that Mindfire Entertainment, the same company that produced the awful House of the Dead movie, had obtained the rights to it. Mindfire announced the movie as “a PG-rated comedy that blends the action and car crashes of The Fast and the Furious with the drama of HBO’s Taxicab Confessionsand the comedy of Rat Race.” Not much has been said in terms of plot, actors/actresses, and the movie seems to have been scrapped or shelved for now.

Crazy Taxi offers up a lot more depth than simply “going real fast”, and that’s where it shines. Unfortunately Sega never expanded much on the formula, and Crazy Taxi basically died along with the arcades. Despite some of the redundancy of the sequels, it’s a near-perfect game design, and it’s still fun to let loose and reek havoc upon cities just to make money.

What are you waiting for? Go out there and make some crazy money!

The first entry in the Crazy Taxi series began as an arcade game running on Sega’s brand new Naomi hardware. The game has a simple premise: you select one out of four cabbies and make crazy amounts of money by bringing customers to their destination in the quickest times. At first, your cab is empty, with tons of people waiting around for you to pick them up. Slide up next to them and they’ll hope in, with an arrow pointing you in the vague direction. Make it fast enough and you’ll get some extra seconds on your clock, along with your fare. Take too long, and not only do you lose money, but precious time as well. The goal is simply to score as high as possible before time runs out. 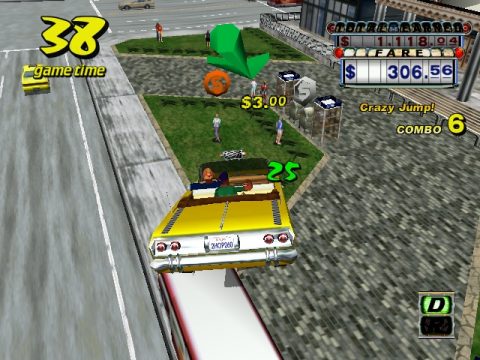 Since this is a score based game, you need to perfect your skill in order to maximize the amount of money you get. Performing insane stunts such as your Crazy Dash and Crazy Drift add bonus cash to your total score, which is paid off when you deliver your customer to their destination. The game takes place in the West Coast, a fully realized city based on the hilly landscapes of San Francisco. In staying true to life, you’ll be able to take your customers to authentic food and retail chains, such as Pizza Hut, FILA, and Burger King, to name just a few. Keep in mind that this game was made before Grand Theft Auto 3 popularized huge, open urban environments, and you can begin to see how impressive Crazy Taxi was, especially since it’s far superior on a technical level, seeing how it runs at a full 60 FPS nearly all the time. There are a few collision and clipping issues, but these are barely noticeable when you are playing. The only annoying control problem is that you need to switch gears to go into reverse, instead of simply holding the “brake” button when you’re stopped, a more natural technique used in other games.

Your fanciful jaunts around the city are accompanied by the likes of bands such as the Offspring, Bad Religion, and Methods of Mayhem, which has become staple music in the Crazy Taxi universe. It’s fitting, but seeing as there are only a handful of songs, they get old quickly. The announcer is also like some random insane guy who sounds like Beetlejuice in desperate need of a chloraseptic lozenge. 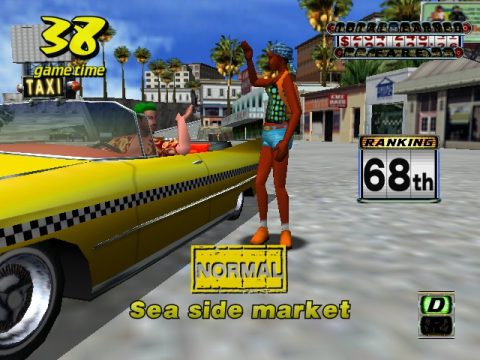 After the initial release for the arcade, Sega hyped up the port for the Dreamcast, which is practically identical to the Naomi hardware. And with good reason – it showed the system’s graphical power, amazing fast-paced gameplay, and was ported almost perfectly. Using the triggers to accelerate and brake makes for better controlling and more natural feeling than the arcade with the steering wheel. One complaint about the control however is that your hands will hurt, but that’s just due to the actual controller in general.

While the arcade game is fun, it’s ultimately a game that can only be played in quick bursts, since they rarely last more then five or ten minutes at a time, unless you’re really good. Due to the nature of the game, the Dreamcast version added tons of extra stuff to make it more fleshed out. While having the original arcade city in the mix, there is now an original level exclusive for the console. The arcade track is pretty much perfection, while the original track expanded upon the level design, spreading out the landscape even further. However, the landscape tends to confuse the radar telling you where to drop off your passengers, and there’s more slowdown here than in the arcade city.

Brand new to the concept of Crazy Taxi is the mini game filled Crazy Box Mode that teaches you how to properly perform crazy moves to use in the actual game. This mode is essential, for it teaches you all the basics and advanced moves to help you pave your way in become the most insane cab driver ever to grace the West Coast. Added bonus is when you complete all of Crazy Box Mode: the Rickshaw (AKA the cabbie bicycle).

Once Sega left the hardware business, other companies were scrambling to pick up some franchises to port over to other consoles. Acclaim went ahead and developed and published Crazy Taxi for the PlayStation 2 first, then for the Game Cube as one of the system’s launch titles. Both versions have a lot more graphical hiccups, including way more clipping errors. There’s also a weird audio glitch in the PS2 version in Crazy Box mode where a song will start playing for five seconds then randomly change. A weird alteration for the Gamecube is that the port has different voice actors/actresses. Other than that, it’s exactly the same as the Dreamcast version. 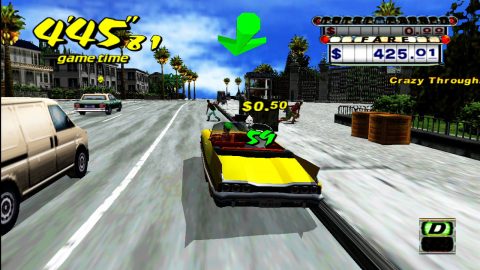 Activision and Strangelite handled the PC port, and it’s the worst one of the bunch. The framerate chugs regardless of your computer’s hardware, making this version almost unplayable and highly unenjoyable. The only added benefit is the fact that you can use a steering wheel attachment to make it more like the arcade, something the console versions (excluding the Dreamcast) lacked support of.

In November 2010, Crazy Taxi was re-released again for both Sony’s and Microsoft’s download programs on their current home consoles. Other than taking the graphics up a notch by supporting the now obligatory HD resolutions (including widescreen support, unlike the XBLA port of Sonic Adventure), this version suffers from the same condition than its counterpart in Fare Wars on the PSP, namely the absence of the original licensed music and licensed stores in the city. On the other hand it once again lacks multiplayer, one of the major defining features that made the PSP version worthwhile. It also lacks in-game custom soundtrack support, but at least you can use the system’s interface to play whatever music you want, provided you’ve copied them to your console’s hard drive.