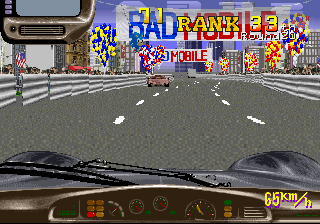 Of Sega’s many racing games, one of the lesser known ones is Rad Mobile, released in 1990. It’s basically like OutRun, in that you drive a Ferrari and it’s a race across a country with various scenery, though it focuses entirely on the United States of America. It’s also played from a first-person perspective, unusual for most of Sega’s racers. It was designed by Sega-AM2 and Yu Suzuki. 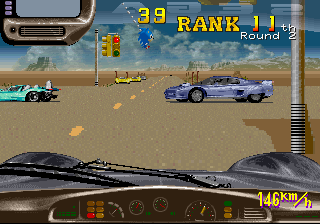 This was the first game developed for the System 32 arcade board, so it offers some improvement over OutRun (though it’s not quite as visually impressive as OutRunners). The road is made out of layered sprites rather than cycling colors, and the roads are filled with hills and long banks, making for more dynamic courses. In addition to a small rearview mirror, there are a few other gimmicks involving the dashboard – some stages are dark while others are rainy, so you need to activate the headlights or windshield wipers, respectively. Other than that, Rad Mobile is mostly known for technically being the first game to feature Sonic the Hedgehog, who appears as a dangling figure by the mirror.

The journey across America is a long one – 20 stages in total – and while the levels don’t technically branch like in OutRun, there are a few that offer shortcuts allowing you to skip some of the stages. You only get the best one if you play through all of them, though. 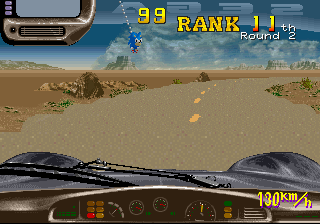 A few levels also feature cops, which you need to avoid. If you manage to get caught, you’ll get pulled over and admonished by an officer, who’ll angrily pound on your car hood. On certain occasions, he’ll even take out his gun and shoot you, which is an astoundingly harsh punishment for reckless driving charges. None of these will cause a “game over” though, it just sidelines your car for a few seconds. In fact, the only way to crash is by ramming into another vehicle – edging along the side of the road will just slow you down. At any rate, the cop gets his just desserts at the end, when he explodes like a balloon, revealing a sexy race queen underneath. 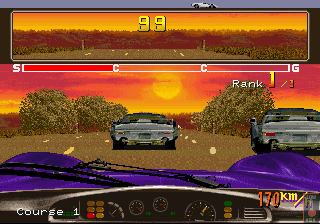 Rad Mobile was followed up by Rad Rally a year later, which is kind of a semi-sequel using the same graphics engine and most of the same assets. Rather than offering one gigantic trek across America, there are four courses – Evening, Rain, Mountain, and Night – each divided into three stages. However, there’s little graphical variation between these, leading to significantly less content.

The main draw here is the ability to race other players, though there are a few other enhancements, like a larger rearview mirror (though the Sonic figure is gone), and an indicator that shows your progress in a given stage. The windshield wipers and headlights are now used automatically, and the car uses manual transmission, so there’s a stick shift. It also utilizes a “slipstream” mechanic, where you can go faster when you’re close behind another vehicle. 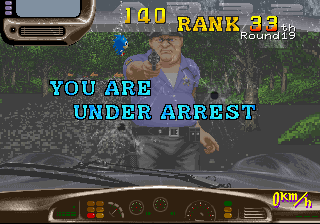 Rad Mobile was ported to the Saturn in 1994 under the name Gale Racer, and was one of the first games released for the system. It was only released in Japan because, quite frankly, the port is a poor showing of the system’s strengths.

The biggest change is that the cars are now rendered with polygons rather the sprites. The downside is that the draw distance is shockingly poor, making the game rather difficult to play compared to its arcade predecessor. The digital controls are also lacking. This really needs an analog controller to feel right. The courses are divided up into six main areas, each with three courses. There’s also loading between each stage, which feels jarring considering each one is less than a minute long. There are also assorted graphical glitches when crashing. It really feels like the game was rushed to make the launch of the system.

As a neat addition, though, many of the stages have unique “rival” cars with specific driving patterns. In the mountain stage, for example, you need to outwit an 18-wheeler, who tries to ram you off the road. (It is rather unusual that such a gigantic vehicle can keep up with a Ferrari.) The cops are present in one stage, though they no longer pull you over, and the police officer that would harass you in the arcade version is gone. There’s also a two-player mode, which is based off of Rad Rally. Other new additions include intro and ending cinematics with poor CGI, typical of the era. It illustrates a story, written entirely in English, about a mysterious person sending an invitation for a no-holds-barred race across the USA, with the best driver being given the title of “Gale Racer”. 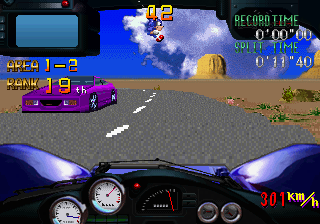 The music has been substantially enhanced, at least. The soundtrack was unmemorable in the arcade version, but most of the music in Gale Racer is all-new, or in some cases drastically arranged versions of the original music. Some of the sound samples are a little harsh, and it still can’t stand up to other classic Sega racers like OutRun or Super Hang-On, but it’s still pretty good.

Additionally, after every set of stages, you’re graded on performance and given “mascot points”, which change the little figure dangling by the mirror. It starts as Sonic, like the arcade game, but it can eventually be changed to Tails, Metal Sonic, Amy, or Mighty the Armadillo (from the SegaSonic the Hedgehog arcade game).

Rad Mobile is pretty fun, and despite the technical shortcomings, Gale Racer can be a good time, too. However, it lacks the speed and personality that’s typified by Sega’s other more popular racers, which is why it’s generally regarded as little more than a historical footnote. 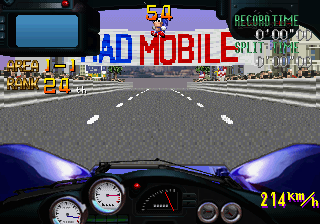