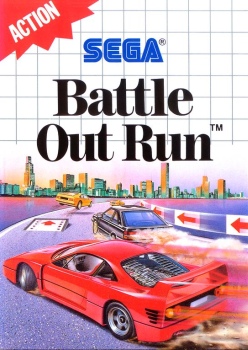 Classic arcade gamers are most likely familiar with Chase HQ by Taito, a good old police-chase game in which you drive a fast black Porsche, ramming into delinquents to take them off the road. Well, Sega went and copied that formula and ended up with Battle OutRun. 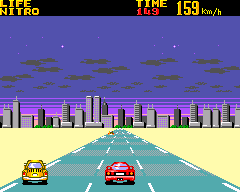 There’s really none of the classic OutRun elements here, other than the game seeming like it was built on top of the Master System port of the original game. Visually it’s very similar, although the design of the car is different. At the outset, you’re given a map of the United States, with seven different levels to conquer. Most of the stage is spent dodging cars, weaving through turns, while avoiding oil slicks and blockades. There are also jump ramps, although functionally they are completely useless. 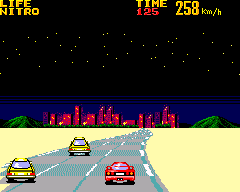 Assuming you don’t waste too much time, after a few minutes you’ll come across the perpetrator, who you must smash several times until you can pull them over. You’re then given a monetary bonus based on your performance, and then progress to the next stage. The money can be put towards purchasing a number of upgrades, which are bought from truck-trailers that pop up halfway through each stage. In addition to upgrading tires, the chassis and the engine, you can also purchase nitro boosts for extra bursts of speed. 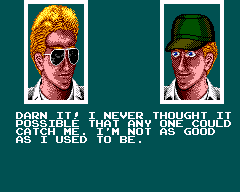 Battle OutRun still has bright and vibrant graphics, the Ferrari still controls well, and the scrolling is smooth. There are four brand new pieces of music, although none of them are named. Unfortunately the long boring levels, poor music and backgrounds, plus extremely annoying CPU cars, make this rip-off of a game a five minute curiosity at best. In fact, Taito’s own SMS ports of Chase HQ and its sequel Special Criminal Investigation weren’t fantastic, but they’re still better than this. It’s also relatively rare for a Master System game, having only been officially released in Europe and Brazil.