Sega and Virgin’s Aladdin for the Genesis was ported to several platforms, including, weirdly, to the Game Boy and Nintendo Entertainment System. But when it came to Sega’s own 8-bit systems, they ended up creating a completely different game.

The SMS/GG Aladdin follows the story even more faithfully than any of the other versions. Here, there are plenty of cutscenes that bridge each level, compared to the simple static screens of the Genesis version. They’re just played out in the in-game engine, but they’re kind of impressive for an 8-bit game. 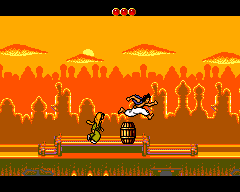 The levels are broken down into two types. There are “chase” levels, where the screen scrolls automatically as you either need to jump over stuff (when you’re on foot) or fly to avoid obstacles (when on the magic carpet). There’s even an early stage where Aladdin is escaping together with Jasmine, something which wasn’t represented in any of the other games. Then there are the regular side-scrolling levels. Here, Aladdin doesn’t have any weapons (outside of rocks) but instead solves simple puzzles to avoid traps or getting captured by guards. These actually resemble a simplified version of Prince of Persia, with their emphasis on jumping and dodging. It ends with the final encounter with Jaffar. Though you only have a single life, you have unlimited continues, and the levels aren’t terribly long either. 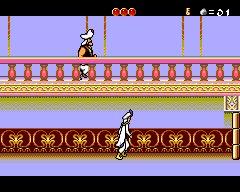 Altogether, the SMS/GG Aladdin isn’t nearly on the same level as the Genesis game, but considering how the other 8-bit ports panned out, it’s understandable that the developers would take a different approach. And even compared to other Disney SMS games, it’s missing the elements that make for a solid platformer. But on the other hand, there’s a shocking amount of effort into what would otherwise be just a cheap licensed game. The parallax scrolling in the Agrabah stages are fantastic, and there are even different sprites for the main characters depending on their outfits (including three for Jasmine, who isn’t even in the game for very long). There’s a stronger sense of narrative here, as the developers of the Genesis game has specified that they just intended gamers would simply watch the movie, whereas this game really wants to make you experience it, in spite of its technical limitations. It’s reasons like these that make it worth a playthrough, something which can be completed in about half an hour.