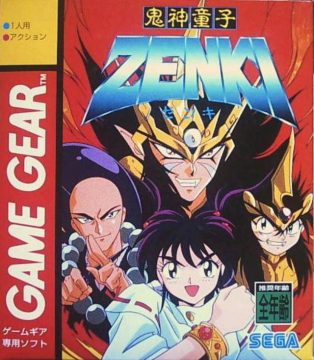 About a month after the SNES release came this, for Sega’s Game Gear, without any kind of subtitle to differentiate it from the other games or source material. It’s a fairly good platformer with some clever attempts at depth. You’re given a map to work through, with various stages and boss encounters en-route, and a couple of difficult-to-find branching pathways to unlock. Before each stage you can select either Chiaki or Zenki – if you choose Zenki it will always only be as his smaller child form; he’s only transformed into his adult self for boss fights.

Chiaki is the agile, higher jumping of the two characters, and attacks using only projectiles she fires from her fingers. She can destroy various shrine like objects, to reveal power-ups, which Zenki cannot. On the plus side though, when he jumps he rolls into a ball which damages enemies, and this is how he attacks, a bit like Sonic the Hedgehog. It’s much easier to land a hit with Zenki, though he needs to get in closer. He can also curl into a ball to roll through gaps in a wall, and damage platforms which are beneath him, thereby allowing him to access secret routes Chiaki is unable to. The levels are generally short and compact, so it’s not like these differing abilities affect things too much, but it’s nice to have.

Major boss battles require Zenki in adult form (though there is a helicopter miniboss where you choose between either of the platform stage characters). As an adult Zenki has access to one of four special magical attacks, which are essential to success, since the boss fights are almost like puzzles, requiring you work out which attacks work best. For example in the chateau with lightning outside, the blue sword-wielding boss appears impossible until you discover that the tornado attack knocks off two health-blocks at a time! Before and after each boss encounter a little cut-scene plays out in Japanese.

It’s also worth pointing out that it has some really great visuals for the Game Gear, with clean, well-defined sprites, vividly bright and contrasting colors, and overall a really nice aesthetic. Unfortunately this is lost both through these tiny screenshots and emulation.

The only slight gripe is that after about 8 stages or so there’s a story event which incapacitates Zenki, and forces you then to traipse back across the map using only Chiaki. Overall though it’s similar to the preceding Zenki title: it’s a nice enough game, reasonable fun in the context of the system’s library, but nothing mind-bogglingly great; if you wanted a top-tier Game Gear platformer, you’re better off with Shinobi II.