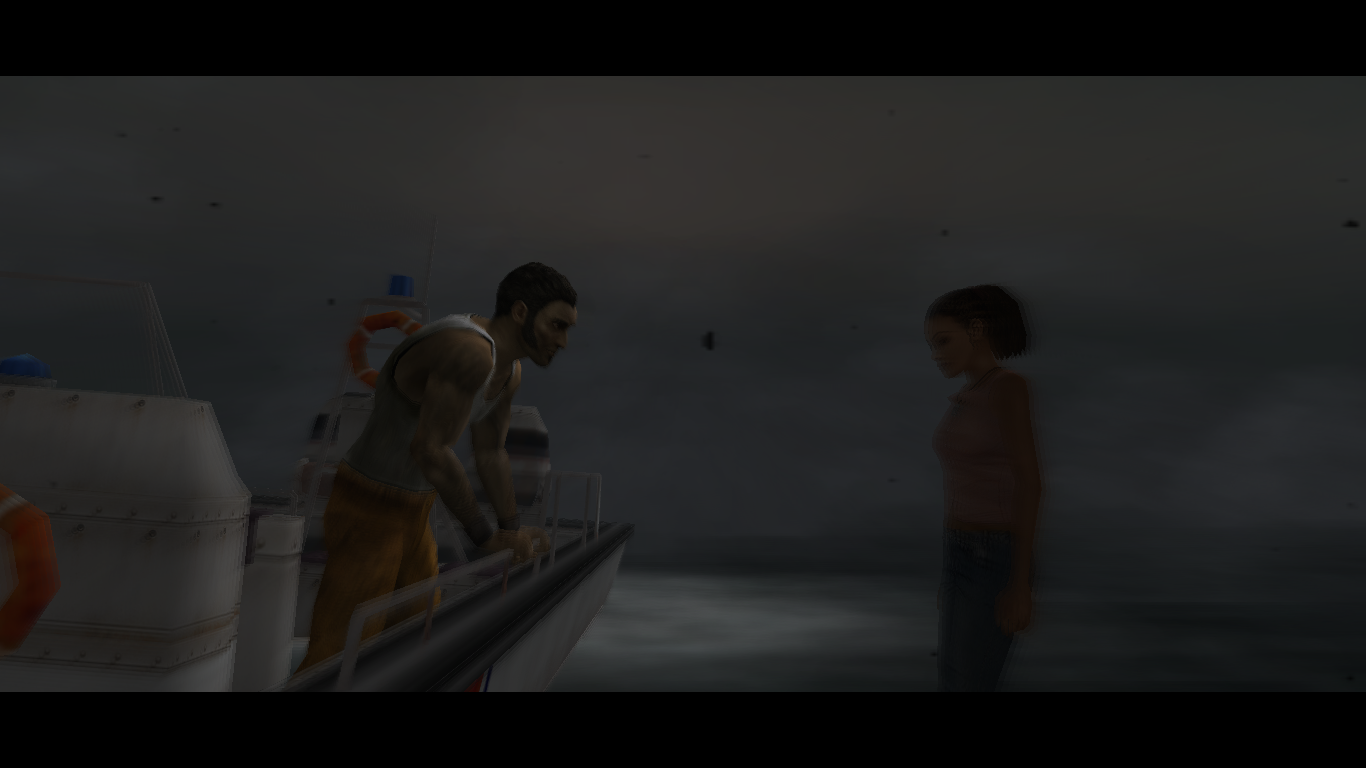 Ties That Bind was released less than two years after the first game in September 2005. That sort of turn around time is ridiculous, especially for a series this ambitious, but they managed it…sort of. While The Suffering‘s PC version was fundamentally the same game but with mouse controls, the PC version for Ties That Bind feels like a completely different game at times. The console games upped the darkness significantly to the point that its hard to make out what’s happening without jacking up the brightness on your TV, but the PC game has a brighter default that makes things far easier to make out so you can actually appreciate what the team made and did. While a lack of visibility helped create atmosphere in the first game, its just a hindrance in the second, especially with the shift to a real world city instead of a secluded prison. Go PC for this game, and absolutely do not skip it because it manages to improve on just about every aspect of the first game, even managing to make Torque a genuine character.

The game starts five years in the past, as we see Torque at a Baltimore prison with his best friend Miles. They’ve both been framed by Torque’s old boss Blackmore, who happens to have arrived in the facility as well, making his presence known as a riot breaks out. The malfactors of Carnate start to appear as things begin to fall apart, ending with Torque going monster and passing out. We return to the present to find Torque escaping to Baltimore, the scenario changing based on what ending you got in the first game. Torque ends up captured by mysterious soldiers working for an organization called “the Foundation,” and escapes once more as malfactors start appearing. Its not long before all of Baltimore is burning, under attack by both the abominations and Foundation soldiers taking people in for research. Torque now needs to find Blackmore, who’s somehow connected to the organization, and finish his business with him for his role in the death of his family. 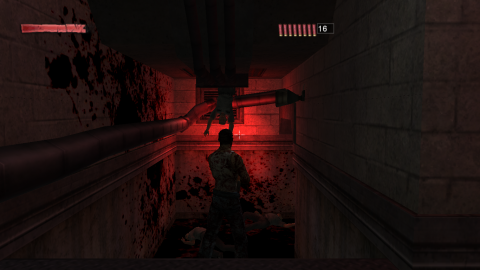 Richard Rouse III moved from just writer to director with this one, signifying the shift in focus from atmosphere to narrative proper. There’s a ton more focus placed on who Torque is, what he did, and the people in his life, and he even gets speaking lines at points, though oddly mostly in flashback cutscenes. It feels like any extra dialog with other characters didn’t make it past planning stages with the time tables set up, especially with taking into account morality based personality changes. Despite that, the shift in focus works surprisingly well, using the people Torque knows as a method of defining him once again but much stronger. The talks from Blackmore, a returning Killjoy, and Carmen’s ghost do a lot of heavy pushing in defining who Torque is as a person, depending on which ending you got in the first game, defaulting to the neutral outcome if you don’t have a save file. That’s all fine and good, honestly, as the good version weirdly makes Blackmore less villainous, while the evil version just continues to have no real weight or meat beyond shock value. The only major problem is that the game gives away its huge, story defining twist within the first cutscene. It is a solid twist for everything both games built up, but not enough is done to hide it.

Baltimore itself works great as a replacement for Carnate, changing the theme from prison evil to urban and American historical evil. The new ghosts haunting Torque don’t have the same personal reflective nature as the Carnate ones, but they fit the setting better and even manage to be a tad more disturbing. Copperfield is especially vile as a slave catcher with human faced dogs, but the Creeper stands out as one of the most disgusting horror characters ever. He’s the ghost of a pimp who slaughtered women in sadistic, gory ways, always speaking in a perverted whisper while the bodies of some of his victims come in and out of his coat on tentacles from inside his own body. He’s toxic masculinity taken to the extreme, a man who sexually dehumanizes women to the point he sees them as objects to take his lust and rage out on. The fact these two can kill characters you come across if you don’t act fast enough is a huge but welcome surprise, allowing them to build their menace on the sides before you can beat them. 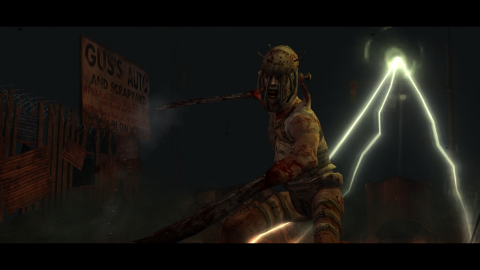 The streets of Baltimore on fire with holes to hell ripped out make for strong visuals, turning from the suffocating, bloody look of the first game for open ended camp horror iconography and familiar sights ripped apart. The Foundation bases are the notable outliers, clearly afterthought warehouses, but they’re thankfully a small part of the game. This change in venue also makes the series focus on darkness troublesome instead of adding to the mood, something the aforementioned PC version thankfully corrected. The fight outside the theater holds less weight when you can barely make out the features of said theater, and that doesn’t get into what you see inside it without proper brightness settings. The game may not have good shadow tech or Silent Hill‘s great use of dark color pallets, but it looks damn good in its own right when you can make things out. The monster designs particularly stand out, though a cannibal based monster added for this game is definitely on the weaker side of the designs. It’s a bit surprising just how good the game still looks thirteen years later in the PC version’s more advanced graphic options. Amazing with some anti-aliasing can do.

There was a lot of assist reuse with this game, so there’s been no real significant jump in graphic or sound quality, but there was a great deal of gameplay tweaks made. The challenged was upped by removing the ability to stash pills for health, instead having Torque automatically take them upon coming close to them while damaged. You could also only have two weapons on hand at a time, having you make decisions on what would be best for the coming area or what you would think would have more ammo available in the coming fights. The useless combat roll was removed, and insanity mode was significantly expanded. Performing an insanity mode transformation in the first game counted as an evil action, making it useless for a good Torque, but now its required to kill elite versions of certain malfactors. Its also used to destroy cracks in walls now, and you can use a super powerful special move that takes out enemies near you with it. Where it was once just a mostly insignificant gimmick, its now a central part of the game, even visually showing Torque’s character growth as it slowly changes with his choices. 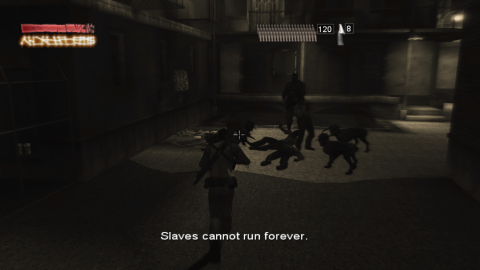 Ties That Bind didn’t get the respect it deserved when it first released, and while part of that was definitely the growing obsession with technological leaps in gaming, having to follow up Resident Evil 4 complete blowing the walls down on the house of gaming horror probably didn’t help matters. It doesn’t have the insane levels of polish of that game, nor the mastery of atmosphere and narrative depth that Silent Hill had shown in the PS2 era. The Suffering is the B-game series of an era of horror mastery, but its significant because it was the best that the west was putting out in that genre.

Japan ruled the horror game landscape, often using western characters and settings in ways that western devs couldn’t hope to match up to. Western horror games usually go back to the old favorites of monsters and zombies, but The Suffering tried to be far more than that, and it succeeded, just not as well as the big kids in class. There’s still no series quite like it, everyone else failing to capture that unique mixture of psychological and historical American horror. Where everyone else sees horror as desperation in powerlessness, The Suffering tapped into the violent background of its country of origin and produced something nobody had even thought of trying in the medium (outside the odd small PC developer house). The Suffering may not be an all time classic series, but its definitely an original, and it deserves respect for that.