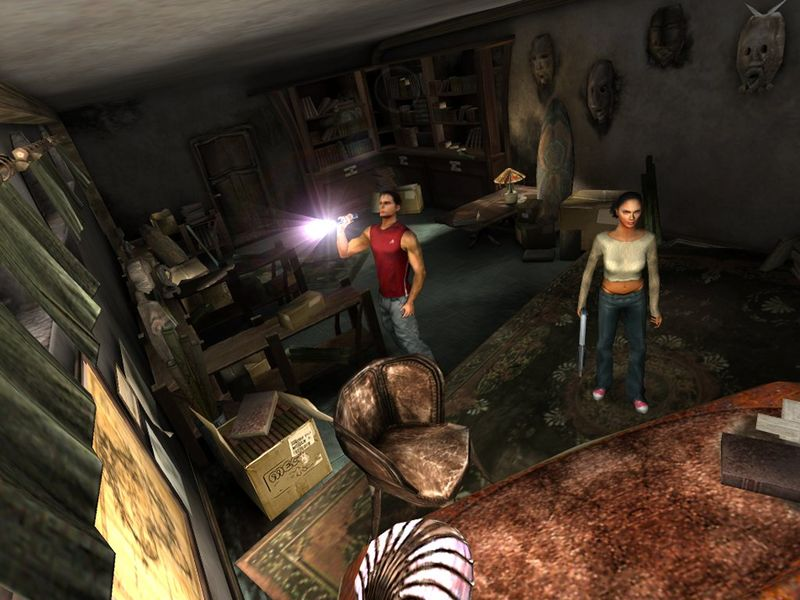 As numerous clones as the survival-horror genre spawned, there is still a common denominator between each of them: the sense of solitude. Being alone in the dark is probably the best way to be terrified. The French developers from Hydravision thought differently and tried to implement something new within the well-established genre: two player cooperative gameplay. After a long and twisted production, the team finally gave birth in 2004 to ObsCure, the teen-horror video game. 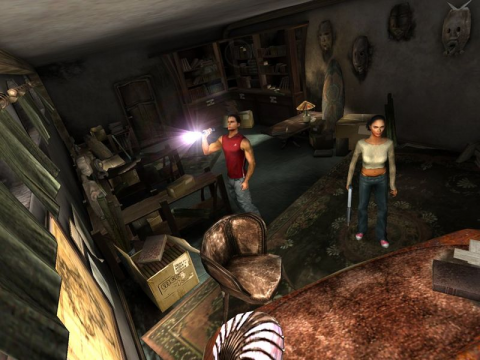 The small company was created by two siblings, a long tradition in French video game industry: Denis & Francois Potentier. Before tackling video games, the company, called JudaProd at the time, mostly conceived tabletop roleplaying games. “Zombies, How to Enjoy Deadly Nights” was a short lived game presenting a strange post-nuclear world where the undead and all sorts of eerie creatures roamed at night. After this small success, the two brothers were able to catch the attention of Microids to finance a video game circa 2000. First designed as Lovecraft-esque story, the project was revamped into a more marketable setting. Heavily influenced by the movie The Faculty, ObsCure became a parody of teen-horror movies.

Set in the United States, Leafmore High is a quiet school where students mysteriously disappear from time to time. Unfortunately, one night, basketball prodigy Kenny Matthews spends too much time on campus and ends up discovering the horrible truth. If the player doesn’t demonstrate enough skill in this tutorial, the prologue can end up with Kenny being killed by the evil lurking under Leafmore. That’s the first innovation of ObsCure: anyone can die. The next day, Kenny’s friends decide to search for their lost mate by hiding in the building after class. Like most of the French who grew up in the nineties, the writers only source of the American education system seems to come from Saved by the Bell & the Australian series Heartbreak High. The story itself is as clichéd as you expect from the prologue: monstrous plants, evil experiments, psychotic teachers and, of course, brainless teenagers. By finding notes here and there, the plot will unravel and even conclude itself in a rather satisfying way.

ObsCure plays like any classic Resident Evil-style game, except for some salutatory touches like the ability to lock-on enemies and a very loose control on camera angles. The most obvious change is the presence of five playable characters. Each possesses a special power that will prove useful depending on what you need to do. The graphics still hold up pretty well with very nice environments and good character animations. 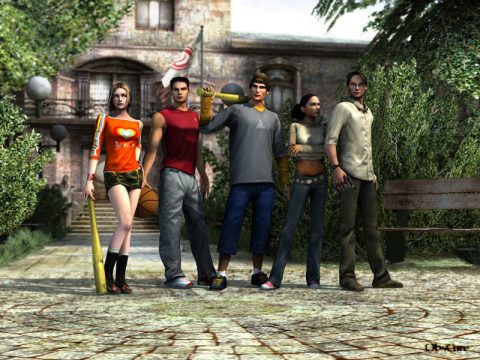 From left to right: Shannon, Kenny, Stanley, Ashley, and Josh.

Kenny Matthews is the jock. He can run faster than anyone and deals more damage in close combat. You spend most of the game looking for him. Try to save him in the prologue because he makes the final boss a cakewalk.

Josh Carter is the creepy geek, always with a camcorder at hand. As a wannabe journalist, he can tell if rooms contain items to pick up, and making them glow. A good replacement, if nothing else.

Stanley Jones is the stoner. Apart from smoking weed all the time, he can easily lock-pick doors and open special lockers. You might want to keep him alive just for the sake of finding stashes of ammo. For some reason, he is Josh Hartnett’s dead ringer.

Ashley Thompson is the angry cheerleader, and Kenny’s girlfriend. She has the capacity to fire a pistol rapidly, meaning dealing more damage but also wasting more ammo. Probably the worst character in the game.

Shannon Matthews is Kenny’s smart young sister. Don’t let her terrible taste in clothing fool you, she’s one of the best as she is able to heal 20% more with medkits. As a bonus, she gives tips for puzzles and always know where the next objective is. 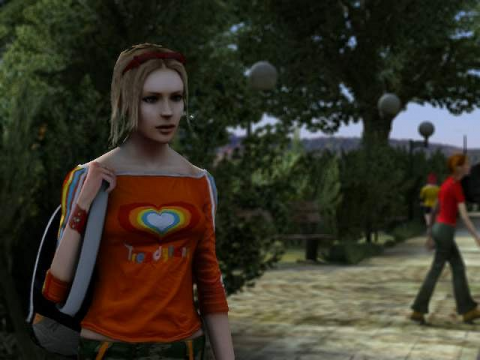 To maximize your chances of survival, ObsCure allows you to work in tandem. In solo play, the companion is AI controlled but you can swap any time you wish. In the great arcade tradition, the second player can connect his gamepad at any time, press Start and take control of the AI companion. As usual, multiplayer makes the game much more fun, but it completely kills the mood. It’s really a matter of taste but ObsCure isn’t scary at all when you’re backed up by a friend.

From time to time, you’re presented with puzzles that involve coordination and teamwork, like climbing into a vent or activating a lift. The game will never penalize you for dying. All of the characters can be swapped in any situation, but losing key members will make some tasks much harder to perform. Watch out though, you still need one character to finish the game, otherwise it’s game over. After quickly mourning for your lost friends, you can loot their bodies to continue the fight. 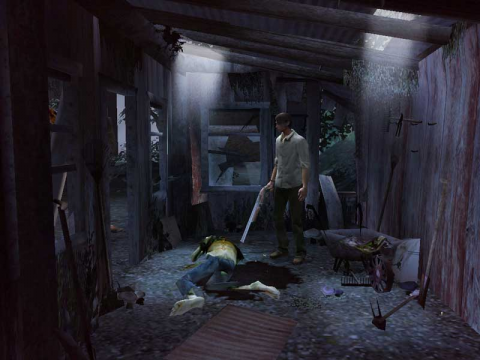 Cooperation and sudden death aren’t the only gimmicks of ObsCure. Thanks to a plot device, monsters lurking around Leafmore High love shadows and are repelled by light. Most of them are protected by a shield of darkness that you will need to dissipate before putting them out their misery. To kill an enemy, you first need to focus your flashlight’s beam on them, and then just beat the crap out of them. This basic idea was later reused in Remedy’s Alan Wake. Of course, bigger enemies will need more fire/lightpower, so guns and big ass maglites will be required. Perhaps making fun of Doom 3, ObsCure allows you to combine flashlight with your various range weapons to use both at the same time. Batteries have infinite juice but will require to cool down after overcharging. Since you’re a real whippersnapper, you can also break a lot of things. First and foremost, you can smash through glass-windowed doors to unlock them easily, but you can also break windows to let the light in and weaken monsters without a scratch.

In terms of difficulty, ObsCure can be pretty brutal. The beginning of the game forces you to leave of your characters defenseless with only a flashlight while the other waits for monsters’ shield to fade. The bosses are brutal and ammo is scarce, but as usual, careful players will be rewarded. Still, the game can be pretty frustrating, thanks to poorly designed areas swarming with enemies. The underground lab, the final part of the game, is just painful as you walk aimlessly through dark corridors with no map whatsoever. 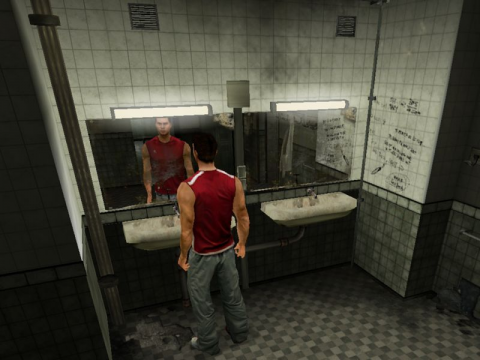 Atmosphere is a key element in survival-horror and ObsCure manage to go off beaten tracks with a fantastic soundtrack. Derivière is probably the best composer in French video game music since Philippe Vachey & Stephane Picq. Sung by The Paris Opera’s Children Choir, the music is undoubtedly the best feature of the game. The gap between the corny teenager plot and the eerie music creates a mood of uneasiness and creeping terror. The art direction reinforces this strange dichotomy by designing the buildings as old stone 18th century-style French & English public schools with a cloister-like design for the central courtyard, for example. The game is fairly short, even in survival-horror standards. Only five hours are needed to uncover the mystery of Leafmore High. Small bonuses are present like a new game+, alternate clothing and a making of feature.

ObsCure remains an interesting take on survival-horror. While having fantastic audio, the game has a number redeeming features like two players mode, swappable characters and nice visuals. Unfortunately, it still stumbles upon the many ludicrous flaws of the genre: daft combat system, stupid puzzles and very short length.