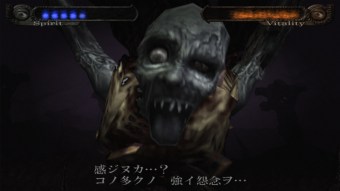 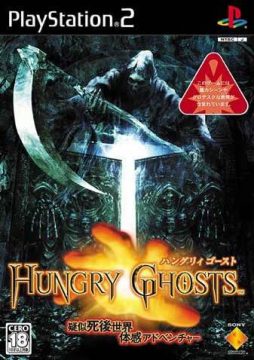 Developed by Japanese software house Deep Space – previously responsible for the survival horror game Extermination – and designed by their founder Tokuro Fujiwara – previously responsible for, of all things, the seminal Ghosts ‘n Goblins – Hungry Ghosts is a first-person horror action experience with some very deep character “creation”. In fact, it is an immersive simulation, and a thoroughly engrossing one at that.

There is some mythological lore surrounding the notion of a “hungry ghost”. This entity is referred to in Buddist scripture as a being that one may be reborn as, specifically one of many states of being. A hungry ghost suffers in the afterlife, burdened with intense cold, thirst, fear and so on. The common visual description of a hungry ghost is that of a large body endowed with tiny limbs, an equally small mouth, and a thin neck occasionally twisted and knotted so that the ghost cannot quench their thirst or hunger. It is generally believed that a hungry ghost has reached that state of being due to their sins, having lived an unhealthy, greedy, or plain-old-fashioned evil human existence. 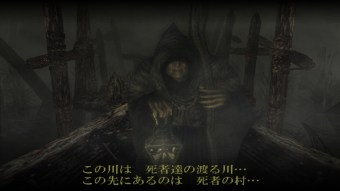 The protagonist in Hungry Ghosts is a warrior of either sex, and of any name. You may choose this at the start of the game. He or she finds herself in the afterlife, standing at the edge of a river with a conveniently-placed boat on the jetty. As you settle into the boat you turn around to find the figure of death, sat across from you. Explaining the enormity of your situation, you discover that you took many lives as a warrior and many of the dead in the nearby village became so by your hand. The dead souls in the village seek material possessions, and they bare intense hatred and sorrow. They wait to find a place in hell.

Death explains that you, like said souls, are destined to wander in hell. However you still hold some measure of control over your being, and you hold the capacity to change your fate. The only way to do this is to receive final judgment at the Gates of Judgment, the portal that faces hell. You will either be sent to an eternity there, or reborn as a human. In order to do this, you must find the truth and connections surrounding the ghosts in the village. Face up to your actions and be judged accordingly. 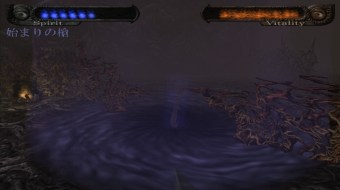 Hungry Ghosts is played entirely from a first-person viewpoint with no exception. However during the introductory cutscene (which isn’t CG! Well done Deep Space), and during many cutscenes further into the game, the game changes to a third-person view where you can clearly see your character. This doesn’t rob any sense of immersion from the game, as clearly you’re playing a specific character rather than “yourself”. The first-person viewpoint is, as always on a console, tricky to get to grips with, and in Hungry Ghosts the controls feel responsive but certainly rather wayward.

The control scheme is similar to that of King’s Field though annoyingly the strafe keys are, by default, L2 and R2. Also, looking around involves holding L1 and moving the left analogue stick, or D-Pad. Not as intuitive as simply using the right analogue stick (did no-one think of this simple idea when developing these games?), and the inverted control will send many players lurching. R1 resets the view to looking straight forward, and holding it allows you to dash.

The right analogue stick comes into play when performing physical actions. Even something as simple as a door needs to be pushed open by hand. Have you played Amnesia? It’s a lot like that. In order to open a door, you cannot just press CIRCLE and be done with it. You must press CIRCLE, select “action” instead of “examination” (these are not literal translations, I’m afraid they are guesses), and your hand appears. You must then move the right analogue stick in the appropriate direction to move your hand towards the door handle, and push it open. 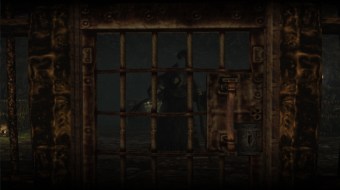 The same applies to items but on occasion the item will be guarded by an evil spirit or monster of some sort, and if you’re not quick enough you will lose vitality. This is a fantastically involving mechanic, and imparts a deep sense of dread every time you reach out to take something. What is a touch frustrating is that there are occasions where you MUST let your hand be bitten if you want the item. No matter how many times you reach for something, then pull back and try again, some items stay guarded unless you allow yourself to be attacked!

The game is entirely in Japanese. It’s only through trial and error, repetition and good memory, that a non-native speaker will make any progress through the game. Thankfully Evil7 has posted a comprehensive FAQ on GameFAQs which goes a long way towards understanding the game. Still, the menu system is a touch convoluted. There are distinct sections for equipping weapons, edible and usable items, and a “log-book” of information that you acquire. There is a LOT of the latter; as you progress through the game, as well as the usual health items, weapons and “quest items”, there are often scraps of paper containing notes. Collecting this knowledge is vital to progress in the game, but a lot of it will be lost to us non-Japanese-speakers, so lets hope for a translation. Having said that, the game is still quite playable without knowing Japanese, simply through the action alone: there are so many twisted, astonishing and horrific events in the game that even without the text, you’ll be left stunned. It’s also possible to keep tabs on your “overall” progress: the status screen shows, amongst other things, your mirror image, the amount of spirit fragments you have received (which we’ll discuss shortly), and a circular diagram: red, green and blue circles adorn the points on a triangle, in which, a blob of energy forms itself in a shape denoting the balance of your desires.

Even halitosis can be an affliction in the afterlife

As an entity in the afterlife, it is possible for you to sustain two types of damage. Hence you have “spirit” and “vitality” meters. The former depletes when you receive “spiritual” (non-physical) attacks. Vitality depletes as you receive physical attacks. If your spirit meter is completely empty, you won’t die, but you will be a lot more vulnerable to attacks. Once your vitality meter is empty, you die. There are many items scattered around the game worlds, but this isn’t necessarily a game where you should take everything. If you do, you begin to receive regular visits from a flying curse when taking objects. Some items heal you to varying degrees, others remove curses, others simply damage you. Without knowing Japanese, it’s simply down to trial and error.

Fighting back is more involved than simply hitting a button: SQUARE switches between sheathing and wielding your weapon. None of the other buttons “attack”. In order to perform an attack, once again you must employ the right analogue stick. The spear requires a simple upward movement to use, but other weapons require more involved movement patterns, e.g. the crossbow involves a downward movement to pull an arrow back, then letting go of the analogue stick shoots the arrow. There are also various types of sacks: items that can be thrown at entities in the afterlife, or to cleanse blood pools for example.

Progress through the game is semi-linear in as much as you spend time in distinct areas, you perform tasks – usually ending the torment of a soul in some fashion – and receive a “spirit fragment”. Often this will open the path to the next area. Hungry Ghosts is otherwise free roaming, you can return to previous areas and the “rules” of the game notwithstanding, you have freedom to walk anywhere and do as you like. The only limitation on this is when you reach “doors of fate”, and if you pass through these, you cannot go back. If you intend to play the game, you will want to be deliberate in your choices, even down to which barrels to break open, or which skulls to destroy. Pick up all the knowledge you can, but if you take too much of anything else, the Gates of Judgment may consider you a glutton.

There are no “save points”, as such. You are given the choice to make a save whenever you pass through certain doorways to the adjoining area. It isn’t until later in the game that areas become somewhat sprawling, but there are often times when, having recently saved, you must then complete many tasks before a door to another area opens and allows you to save again. 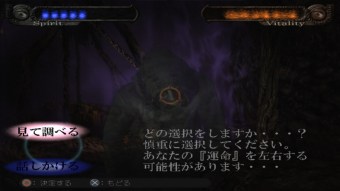 Visually the game is a winner, a dark Lovecraftian maelstrom of deep hues, twisted visages, bodies, rock paths, distant black shapes, and lots of very pissed-off ghouls. Hungry Ghosts is a game that, having eschewed realism for artistic and creative visualization, has aged fantastically well. It may not have the polish or the vast over-worlds of today’s sand-box monstrosities, but that isn’t what it sets out to do. You’re a fragile being in an unfriendly place, and the character design, texturing, and modelling all do an exceptional job of making it believable. There are smaller touches such as twisting fog, twirling water, and one particularly neat effect where – at random – you will see your breath billow from the bottom of the screen, as you breathe out. Excellent! (And crikey, it must be cold in the afterlife!) The game engine does also have physics; not many objects use it, but for example once you reach the chains in the Path of Exposed Darkness, you can attack them with your spear and they flail around accordingly. The only niggle I can think to mention is that there is some occasional visual breakup at the edge of the screen as one turns. (Oh, if only Prince Devian could turn as fast as this!)

The audio is also very strong, sharp twangs as your spear clashes, deliberate trudging footsteps, the crackle of fire, persistent crowing birds and of course the guttural, unearthly moans and groans of hungry ghouls ‘n ghosts. I’d say faultless audio design, in fact, perhaps Deep Space were playing a lot of Thief or System Shock at the time, and that rubbed off? On the other hand, there seems to be no music. I’ve played quite a few hours of the game, and apart from the odd chime when you pick up an object, there’s no background score. There are even some portions of the game where there is no sound at all!

Hungry Ghosts was featured on GamePro in a full English interview with Tokuro Fujiwara, but it never made it to the West. Considering the content of the game, it isn’t surprising. It comes recommended anyway, as it’s a unique immersive simulation. While it may be “restrictive” compared to others it is fairly replayable if you wish to explore the amount of choice it gives you. The combat is tricky but effective, the visuals are unforgettable, there is a lot to explore, and the premise is handled in an uncommonly mature fashion. Quite simply it is a fascinating experience.