Jewel Master (not to be confused with the series of match-3 puzzle games of the same name) is a side scrolling action game that came out in the early, pre-Sonic the Hedgehog days of the Sega Mega Drive, when the system’s library consisted mainly of arcade ports and in-house projects. It promises to stand out from the crowd with a unique gameplay mechanic, but squanders its potential and is instead little more than a terrible action game. 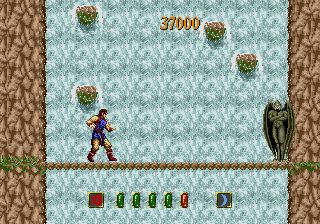 The game begins with a prologue establishing the game’s backstory, of how the Twelve Masters of the Elements tried and failed to prevent the demonic despot Jardine The Mad and his hellish forces from conquering the peaceful kingdom of Mythgard, but most of the details are left out. If you read the instruction manual, you’ll find that you are the Jewel Master, an otherwise nameless hero who must traverse Mythgard, battling monsters along the way and finding magic rings that give you special powers, and defeat Jardine once and for all. 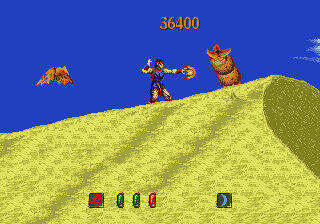 Jewel Master is a side scrolling action game that, with its focus towards action, pretty stiff controls and waves of enemies for you to overcome, is tempting to compare to early Castlevania games. However, this comparison is tempered by two distinct traits. The first is Jewel Master‘s focus on magic rings. Wearing a ring on your left or right hand will give you a magic spell, which is usually an attack (e.g. a fire blade). But you can have two rings for each hand, and equipping a different ring will change the properties of the attack (e.g. wearing a “speed up” ring and a “fire” ring on the same hand will allow you to launch a fireball). 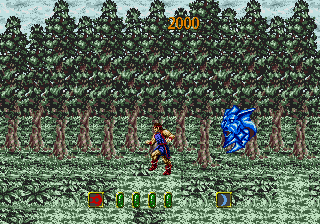 This is a clever idea that encourages the player to mix and match between different ring combinations to find attacks or abilities that best deal with the types of enemies encountered, but it is underdeveloped. There are only four base magic types (fire, water, earth, and speed up), and most of the rings you find are simply more powerful versions of those base types. As such, you’ll more than likely end up sticking with two attacks throughout the entire game, only changing rings to upgrade your attack power. 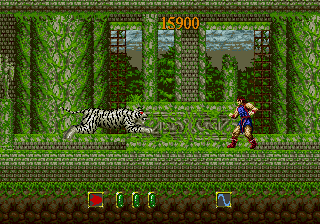 The other distinct trait is that the early Castlevania games are well made action games that force the player to think and play with caution. The stiff controls are an acquired taste, but environmental hazards and enemies are designed around those controls, and the game can be conquered if you act carefully and deliberately (or if you don’t want to listen to that blasted death jingle yet again; either way works). 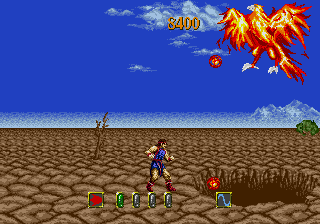 Jewel Master is as mindless as an action game can get, owing to very basic levels where you mostly just walk down a straight path and spam your attacks at enemies. Most of the enemies act in the same way; charging towards the player or firing a projectile attack in their direction; so there’s no difference in how you approach them. You can’t even avoid them or their attacks, since your jumps don’t have the distance or height to prevent you from landing on them, and ducking is completely pointless since projectiles are big enough to still hit you. 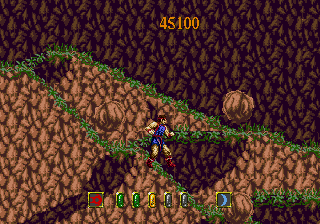 There’s no real degree of strategy on offer because of these issues, so even on the easiest difficulty, you’ll more than likely be forced to tank your way through the level and hope for the best. There’s a good chance you won’t get far, however, since there are no checkpoints unless you get to the next section (and each one can take 3-5 minutes to get through). That’s right; if you die at any point, even at a boss battle at the very end, you’ll be kicked right back to the beginning of that section. 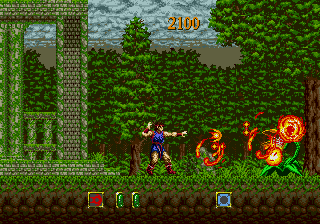 In the great pantheon of Mega Drive action games, there are far better examples to check out than Jewel Master in terms of interesting level designs, action packed gameplay, and sheer mindless fun. There are certainly better examples when it comes to visuals. With enemies’ colors frequently blending into the backgrounds’ colors, competent but uninspired character designs, and very basic animation, the graphics are mediocre at best. 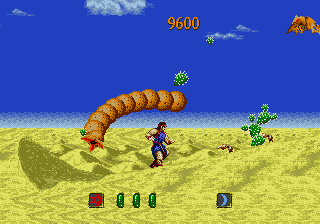 Really, the only good thing about Jewel Master would have to be its soundtrack, which mostly consists of the kind of banging rock tunes associated with the best of Mega Drive games, and the occasional bit of orchestral ambience for the more mysterious levels. This was the first game to be composed by Motoaki Takenouchi, who would go on to do the music for the Shining Force games, and it’s a great debut! It’s just a shame that the game it’s from is total rubbish.

Sega Retro’s brief look at Jewel Master, which contains scans of the game’s covers and instruction manual, along with contemporary reviews of the game – https://www.segaretro.org/Jewel_Master