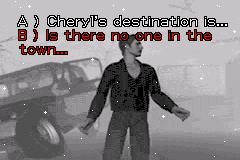 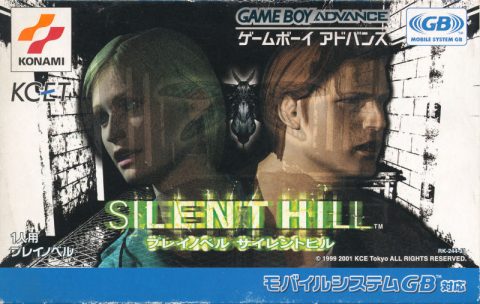 The Konami of the early 2000s were more willing to take some chances. Perhaps it was because they could afford to be, between their Beatmania series being popular in the arcades and coming off of a string of hits on Sony’s new console. There was still plenty of room for trial and error, even for something new like Silent Hill. Visual novels have always been popular in Japan, so why not give Silent Hill a go at it? And that’s what they did on the Game Boy Advance, with Play Novel Silent Hill as a Japanese launch title for the system in 2001.

The game is split up into two scenarios, one for Harry & one for Cybil. Harry’s scenario is naturally the one that follows the original game closest, narrated from his perspective. Cybil’s scenario gives insight into what she was doing off screen during Harry’s story, and helps shed some light into her background and why she became a cop. All the expected suspects from the original game – Alyssa, Dahlia, Kauffman, and Lisa – show up as the story plays out.

There was a third scenario planned for the game but it is unfortunately both unfinished and lost. The one new character in the game, a young boy named Andy was going to be the focus of this scenario. He is Cheryl’s classmate and neighbor, who stowed away in Harry’s Jeep and shows up in Cybil’s scenario as well. The scenario was going to be told through four chapters, each set in a different season, as he watches Cheryl from afar, working up the nerve to talk to her. Only the spring chapter was released and it was only available for download with Mobile System GB, a short lived service that delivered content to the Game Boy Color and Advance through cell networks in 2001. And since the data was stored temporarily in memory and vanished when the console was turned off, no known copy of the spring chapter currently exists. Any information about this scenario originates from fan translations of the game’s official strategy guide.

The game looks and sounds like many other visual novel do. Text is imposed over CG stills from the PS1 game’s FMV and new renders made for the game. Occasionally, the game uses clips of the FMV, but they run at a low frame rate and look super grainy and muddled. There is the occasional animated flare, like the streetlights flashing across Harry’s face as he’s driving in the prologue, or enemies shuffling around. Luckily, the game sounds a bit more interesting than it looks. The GBA’s sample-based set up works well here, doing a strong job of creating the crackling radio static, the groans of monsters, or Harry’s footsteps walking down stairs. In that way, it’s akin to sound novels, providing atmosphere more with sound than visuals. Music is a subdued affair, consisting of ambient soundscapes that occasionally become more complex as the dramatic moment calls for it, like meeting Lisa for the first time or encountering monsters.

The bulk of the game plays out depending on the player’s decisions at certain moments in the story, like how to engage a monster or which way to follow Cheryl. A flow chart maps out the progress through these choices, and allows players to jump around a given scenario. Like other visual novels, you can scroll back through a history of previously read text, in case you missed a detail. Occasionally, simple logic puzzles provide a break from the reading, with none of the puzzles from the PS1 game making an appearance. The average playthrough is about 1-2 hours, depending on reading speed. To add to replay value, a variety of new endings were crafted, 14 or so between both scenarios. These cover a host of what-if scenarios that play out if the player chooses a path outside of the ones in the original. Each ending gives a few trading cards when the player gets them, and there are 32 cards to collect in all. Well, only 28 are actually possible to collect, since 4 are exclusive to the DLC scenario (these are unlockable with a hacked save file, fortunately.)

The game was never officially released in English. In 2008, a fan translation guide was made, covering both scenarios of the game. More recently, in 2021, the translation was patched into the game, but it is in beta, lacks proofreading and glitches, like garbled images in some puzzles, can occur. Fan ports, using the same translation, have popped up throughout the years as well. A version recreating the game in the TyranoBuilder engine works fine but doesn’t have the handy flowchart of progress and it only seem to play in a GBA-sized window in modern Windows. A Sega Genesis demake is technically impressive and functionally complete, covering both scenarios with the endings & trading cards and even using the sound effects from the original.

Play Novel Silent Hill attempts to recast the horror atmosphere of the original in a new format on a portable screen, to mixed success, and its use of cellphone data to download new content was novel many years before it became common place. However, anyone interested in the original would be better served by playing the PS1 version. Given the Japanese title starts with ‘Play Novel’ and ‘Silent Hill’ functions more as a subtitle, one wonders if Konami were hoping that this format would have spawned a series. Who knows, there might have been a Play Novel Castlevania or Goemon or TwinBee, were this one successful. Such could have been the fruits of a more creative Konami.