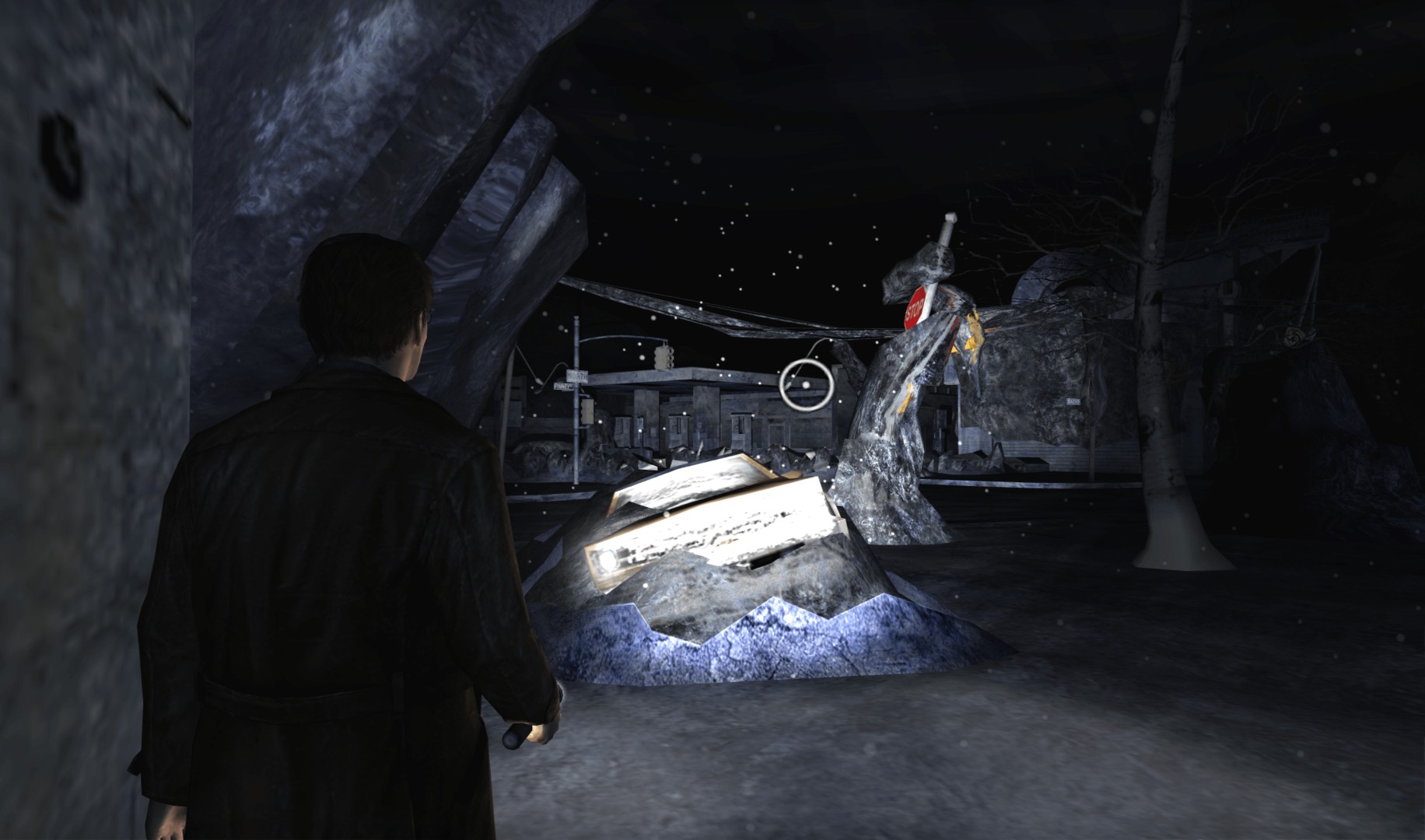 After Homecoming, the Silent Hill series returned to Climax Studios, and the development studio wanted to try something different with survival horror with their second go at the series. After pitching a few ideas to Konami, they landed on remaking the original game with a reactive, psychological twist, releasing Silent Hill: Shattered Memories in December 2009 on the Wii, and in January 2010 on the PS2 and PSP. This is laid out with its bright red warning screen when the game is turned on; it claims that it will bring your darkest nightmares to light and that the game is playing you as much as you’re playing it. Lofty claims, for sure. But does Shattered Memories live up to its high aims?

Shattered Memories begins in a therapist’s office and with a car crash. Being a reimagining of the first game, it starts Harry Mason wrecking his car one snowy night in Silent Hill and being separated from his daughter, Cheryl. At the office, an unseen Harry goes through therapy for the incident. The game cuts between these two scenes at important points, and as the search for Cheryl continues, so does the counseling. All the familiar characters from the PS1 game appear in remixed ways that are distinct from their original portrayals. For example, Cybil is still a police officer, but is constantly suspicious of Harry and his motives. Kaufmann is given a completely different role, working as the psychoanalyist in the counseling scenes. Dahlia is here in name only, being much younger and completely disconnected from any of the series’ cult. New characters, like prom queen Michelle and her boyfriend John, help round out the cast on the journey, given that there were only so many to pull from in the original. 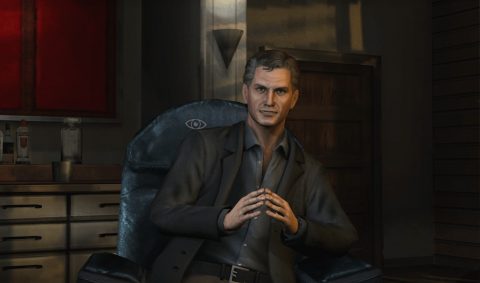 Dr. Kaufmann’s therapy is quite aggressive, and these are the moments where the game is “playing” you. In an early segment, the player is asked to color in a line drawing of a family and a house with colored pencils. The color given to the house or to the two people in the coloring book picture will change the siding of the house or the shirts of the people who answer the door when Harry knocks. And this profiling doesn’t just stop at the therapy sessions. What the player chooses to focus on during Harry’s search has an effect too. Eying lecherously at a poster of a bikini clad model tilts things toward a more titillating direction. Choosing to enter a bar over a diner gives Harry a more alcoholic vibe. These changes manifests through when and where he meets other characters, what kind of clothes he and other characters will wear, and naturally, how the ending plays out. While this aspect of the game is exaggerated by its marketing material, it is dynamic enough that replaying the game reveals interesting variations and new dialog.

As Harry wanders around the town, he’s able to interact in more ways than other series protagonists and how those interactions play out depends on which platform is being played. The Wii version makes full use of its Remote. Harry moves with the Nunchuck stick, and the Remote  itself is used to look around with the camera and the flashlight. He can use a phone to take pictures, make calls, and access a GPS map with waypoints on it. Calls can be received either through the Remote’s speaker or through the game audio, with rumble handling phone’s vibration. Harry is able to rummage through drawers and open cupboards with gestures to make progress, or respond to questions during first person moments with a proper waggle of the controller. On the PS2 & PSP versions, these interactions are done via button prompts and analog stick. And while the DualShock 2 has rumble, it lacks a built-in speaker, and the PSP has no rumble. 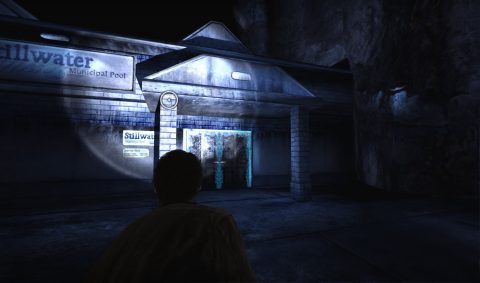 The puzzles are very simple this time, perhaps the simplest in the series. However, they are grounded in the game’s world. The first puzzle Harry encounters is a door with a security bar across it. He has to lift the pen and then slide the bar to open it. It’s a far cry from dropping a six pack of soda on trash to get a coin from a garbage chute, but these mundane moments bring to mind virtual reality, how observing an environment and interacting with it can be its own fun. One puzzle has Harry rummaging around a principal’s office to brute force his way through random security questions on a computer. Another puzzle has him bothering the operator of a drawbridge on the phone in the middle of the night to figure out what levers will bring it down. The Wii Remote or the analog sticks of the DualShock are nowhere near as advanced as the motion controllers used with even the most basic headsets today, so these actions can be cumbersome to perform, and they get repetitive as the game goes on. The town’s got a security problem, for sure; everybody’s just leaving their keys lying around in cans of beer or on shelves behind unlocked windows.

The town of Silent Hill, as it is want to do, will become a threatening terror world, only of a much more frigid variety this time around. Ice bursts from the ground, covering cars, street signs, and buildings, with a cold, blue aura. The sole enemies, Raw Shocks, pursue him in great numbers through these segments. Unlike other characters in the series, Harry is completely defenseless and can only run away or hide from them. When one of the monsters gets their hands on Harry, he has to shake them off by waggling the Wii Remote and Nunchuck in a cardinal direction or with a press of the corresponding face button in the PlayStation versions. Flares help keep the enemies at bay for as long as they are lit and Harry can knock over pieces of the environment, like a locker, to get in the way of the enemies’ pursuit. These segments are maze-like, requiring Harry to keep moving and searching for the right way out as he flees the enemies nipping at his heels. This can lead to getting stuck in a loop and unable to find an exit, especially if the enemies are being particularly annoying. Luckily death simply means starting back at the beginning of the segment. Occasionally puzzles offer a break from the pursuit. 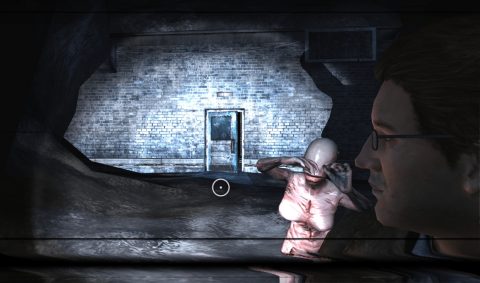 Late in the Wii’s life, some developers found ways to make the console sing, and Climax put that on display with Shattered Memories. The light from Harry’s flashlight casts a sharp and realistic looking shadow on the environment. Little trinkets found through out the game, called Mementos, have high quality models that reveal all sorts of details on close examination. Any time a monster attacks, the game starts to lose ‘tracking’ like a VHS tape, as an indication of Harry’s health. Even on the lesser hardware of the PS2, the game still performs and looks well. The PSP version however suffers the most, due to the weaker power of the handheld. A technical problem that affects all three versions is excessive stuttering when opening doors during the nightmare segments. Akira Yamaoka returns once more to bring his touch to the series’ music and sound, continuing on the trip hop chill angle from Silent Hill 3. The cold environments of the nightmare segments are made all the more foreboding and tense with his compositions and sound workd. Mary Elizabeth McGlynn returns as well to lend her voice, with the catchy and haunting opening, “Hell Frozen Rain,” and others. 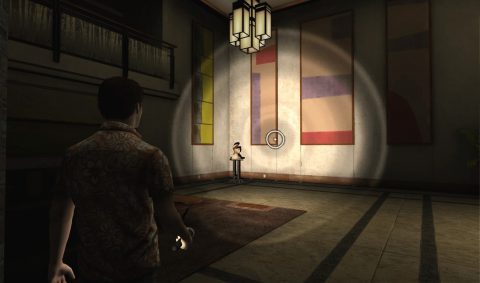 Silent Hill: Shattered Memories took a risk by trying something different, with its mundane puzzles, focus on tracking the player’s actions and exploration, and a distinct lack of combat. It’s not a remake of the first game by an stretch of the imagination, as it fails to capture the particular atmosphere and tone of that seminal title. But the new things it experimented with were oddly ahead of its time. A game with this premise and these mechanics, built for VR, likely would have found success. Much like Silent Hill 4, Shattered Memories went in a direction that was abandoned, for better or worse. The next developer to get a shot at the series would make an attempt to return to form.