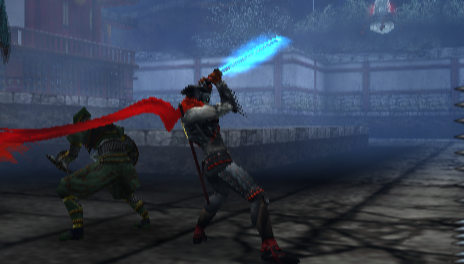 Shinobi, devoid of any numerals or subtitles, finally hit the third dimension with a PlayStation 2 release. Developed by Overworks, it stars a new ninja named Hotsuma, who has a wickedly cool mask and a fancy red scarf that drifts in the wind as you run. There is plenty of time wasted on the plot – something about evil denizens coming from another world – and there’s some brotherly dramatics regarding Hotsuma’s sibling Moritsune, but it all just gets in the way of the action. 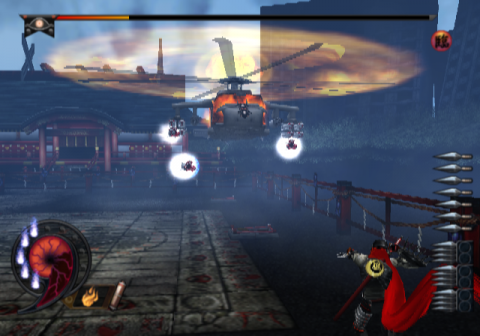 And it’s some damn good action. This one of the smoothest controlling 3D games ever made – Hotsuma runs, jumps, and attacks swiftly and gracefully, making the mere act of moving around an absolute joy. There’s a variety of standard ninja moves at your disposal, including the traditional double jump, although you now have the ability to grab onto almost any wall and run across it, completely giving the middle finger to that nonsense theory of gravity. Although you’ll do most of your fighting with a sword, you have a small arsenal of shurikens to stun enemies, and some ninja magic to use when needed. A handy lock-on maneuver makes it easy to spot any oncoming foes, although it’s sometimes too easy to misdirect your jumps when you’ve targeted an enemy, usually ending with a drop into a pit. Getting the hang of the controls takes awhile – you have to constantly use both analog sticks, the shoulder buttons to lock-on, and other buttons to dash, jump and attack, but once you get into the rhythm, simply playing the game is like an acrobatic ballet for your fingers. 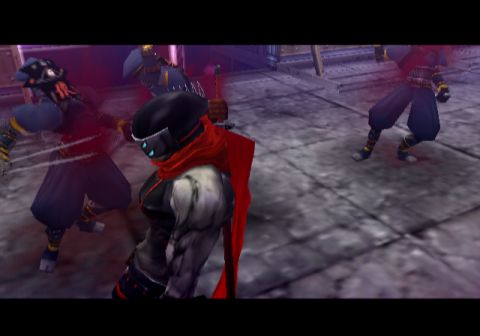 One of the most important elements to your victory is learning how to “tate“ (pronounced in Japanese like “tah-tay“, not “tate“ like “taters“). If you kill enemies quickly and build up combos, your sword gradually becomes more powerful. It’s necessary to form huge combos in order to bring down many of the bosses, but it’s also fun to do because it looks badass – kill all of the enemies in the area quickly enough, and you’re granted a short cutscene of Hotsuma posing before all of them, in a frozen state of death, falling apart and collapsing in a mess of blood and otherworldly goo.

Of course, Shinobi  is damn hard. Not just “kind of“ difficult, or “really“ difficult, but rather “face punchingly“ difficult. The first two stages are a breeze – then things go awry when you face enemies that block frontal attacks, most notably some damn ninja dogs. You’re also expected to make some pretty crazy platforming maneuvers in the later levels, and one mistaken button press will send you falling to your doom. Additionally, there are no midlevel checkpoints either, so dying means starting each level – some of which are approximately 10 minutes long – from scratch. You do have unlimited lives, and the game is generous enough to let you restart at the beginning of boss battles, but it’s still incredibly tough. Also, since Hotsuma is wielding a cursed blade named Akujiki, it slowly sucks life away from him unless he’s constantly killing enemies, so dawdling will result in a sad, pathetic death. 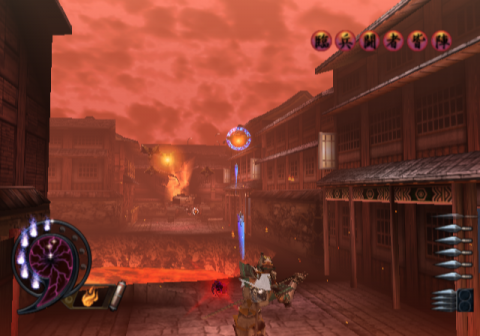 The bosses, like the rest of the game, start off simple but quickly ramp up in difficulty. In an allusion to the original game, one of the first bosses is a helicopter. Later on you fight a blind ninja in a pool of water – stay off the ground or he’ll slash you to bits – and a gigantic four-armed statue that shoots lightning bolts and will happily pound you into submission if you’re not careful.

But worst of all is the final boss, Hiroko, who floats in the air out of your reach, and floods the playing field with so many difficult enemies that it’s nearly impossible to get a tate combo to beat him. He is one of the most infuriating final bosses in history, and if you can kill him, hats off to you. While Shinobi was released first in America, the later released Japanese and European editions included an easy difficulty setting, although it doesn’t make too much of a difference. 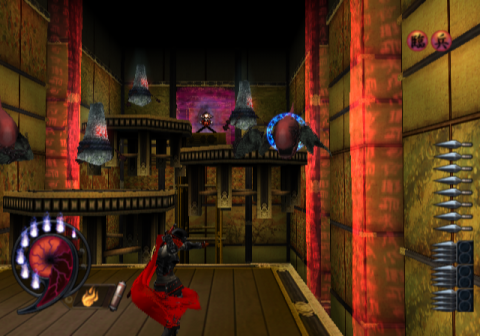 If you’re actually skilled enough to play through the game multiple times to find the hidden bonus coins, and on harder difficulty levels, you can unlock Hotsuma’s brother (and nemesis) Moritsune as a playable character. The older sibling is stronger than Hotsuma, but his life is drained even more quickly. The final playable character, the legendary Joe Musashi, doesn’t suffer from a cursed blade and thus playing as him the game is much more forgiving – though you can only get him after finishing most of the game with Hotsuma before. The highest reward for finding all the coins are additional missions in a white “VR“ environment, which just throws the most insane combat and platforming challenges at you. There’s also a gallery of artwork and a cinema mode for the FMV cutscenes.

It’s not just the difficulty that turned so many people off the PlayStation 2 update of Shinobi – the graphics, while running at a smooth frame rate, are rather drab, and the level designs are fairly boring, filled with the same hallways and large rooms, all pasted with the same textures. The hyper-smooth action mostly makes up for these flaws, but many people found it to be a rather plain yet infuriating game. In spite of its many problems, Shinobi has the foundations for one of the best action games of the PS2 era; a flawed but underappreciated classic that’s absolutely worth checking out. 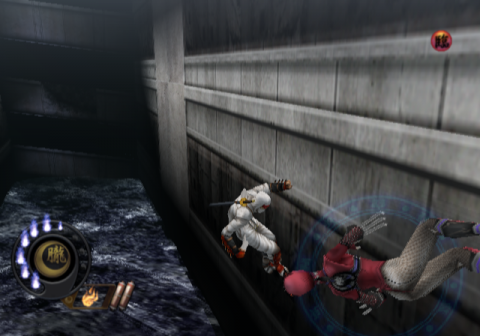