Much like ESWAT, another Sega arcade-to-home conversion, the Genesis version of Shadow Dancer is completely different from the arcade game. The story depends on which version of the game you’re playing: in Japan, the hero is Hayate, Joe Musashi’s son, while in the English version you’re playing as Joe Musashi himself. His goal this time is to take down the absurdly named terrorist organization Union Lizard. 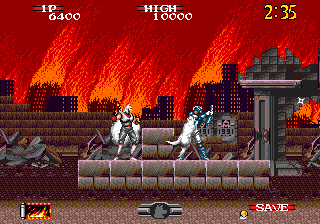 While the basic mechanics remain the same as before, the game consists of five mostly new levels, though some of them are reminiscent of stages in the arcade version. The most memorable new levels include a burning town (complete with waving flame effects and bursts of fire shooting from the sewers), an urban district in the midst of an earthquake, and a battle at the top of the Statue of Liberty. The soundtrack is also completely different.

The boss battles are a little unimpressive compared to the arcade version (no battles with trains, unfortunately), but they’re still well designed. The graphics are comparable despite the limited palette of the Genesis, although the magic attacks are missing the cool close-ups. The soundtrack is also new, and more reminiscent of The Revenge of Shinobi. 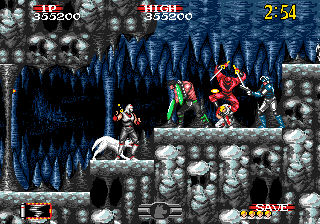 You’re still accompanied by your faithful dog, and this time you can even directly command him to attack by holding down the attack button. The dog can jump over boxes and otherwise leap up at enemies that would normally be out of your range.

There are a few other minor changes as well – you’re back to rescuing hostages as opposed to disarming bombs. The bonus stages have changed drastically and steer away from the first-person shooting galleries of the other games. Instead, the hero leaps off a gigantic building and you are instructed to “SHOOT ALL NINJAS!“ as he hurtles towards the pavement. 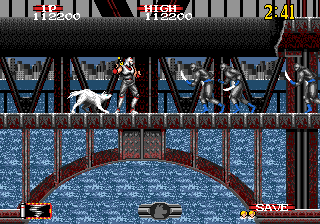 While Shadow Dancer is a bit easier compared to the other games, there are several difficulty levels, including an option to play without shurikens. Overall, it stands up respectably to the arcade version.

This version of Shadow Dancer is featured on the PS2 and PSP Sega Genesis Collection, but is missing from Sonic’s Ultimate Genesis Collection for the PS3 and X360. Why? The game is on Germany’s index of “youth-endangering media“, and thus cannot be sold there. Being too cheap to apply for it to be taken off, as is done with other games that used to be considered as violent in their time, Sega removed the game from all regions.