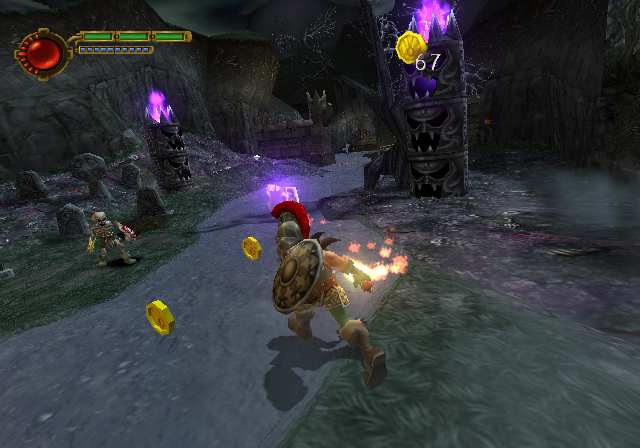 After the Gargoyle’s Quest side-story series, Capcom let the Ghosts’n Goblins franchise lay pretty much dormant until 2001 (with the exception of the Wonderswan game), until it was sorta digged up and reinvented as Maximo: Ghosts to Glory. Maximo was originally meant to be a Nintendo 64 game, but due to the death of the system, it was delayed and moved to the PlayStation 2, as one of the first semi-decent action-platformers for the system. Despite some contributions from Capcom’s Japanese team (mostly the character designs), the game itself was created by Studio 8, Capcom’s American development team, who previously created the bomb Final Fight Revenge for Saturn. Rather than simply taking Ghosts’n Goblins and turning it 3D, Maximo is essentially a whole new franchise that draws a lot from the ambiance, style, and mechanics of Capcom’s classic series. It’s also, as one can imagine, brutally difficult. 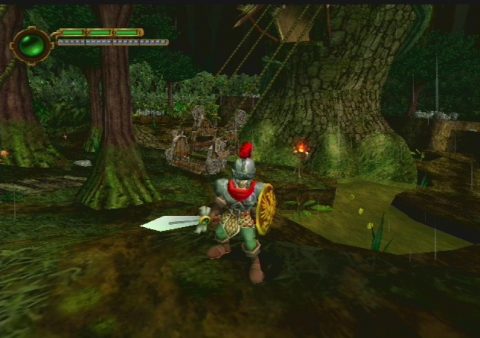 Maximo is a heroic king on heroic adventures. When he returns to his throne, he finds that his right-hand man Achilles has usurped his kingdom and kidnapped his love, Sophia. Maximo attempts to fight his former friend, but ends up getting slaughtered. On his descent to the land of the dead, he’s met by the Grim Reaper (playfully referred to as Grim.) Grim is none to happy with Achilles, since he’s been funneling the souls of the dead for his own purpose, keeping them from underworld. Maximo is resurrected to help Grim take revenge on Achilles and find the kidnapped queen.

Maximo feels a lot like other PS2 platformers like Jak and Daxter or Ratchet and Clank, although with a greater focus on melee combat. The framerate is smooth 60 FPS almost all the time, and the graphics are pretty damn impressive, considering this is a nearly PS2 title. The levels show a detailed level of quirky spookiness, and the characters—designed by Susumu Matsushita, famous for his artwork on the cover of Japanese video game magazine Famitsu—are loaded with cartoonish expression. The music involves a lot of different arrangements of the old Ghosts’n Goblins theme, which would be clever if the motifs didn’t repeat over and over throughout the entire game.

There are several different types of worlds—a standard graveyard level (which features earthquakes that causes the land to break up, similar to Super Ghouls’n Ghosts), a jungle world, a snow world, a fiery hell world, and a castle stage. Each world has a hub stage, where you can run around, kill more bad guys, or enter any of the main stages. At the end of each stage is a maiden, that can either grant you a power-up or give you a kiss, which will unlock a gallery if you get smooched by all of the girls. 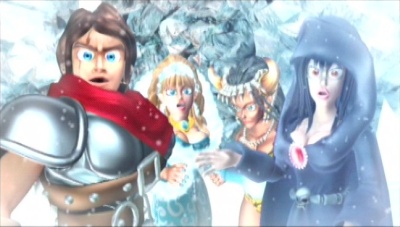 Although the game controls pretty well, there is a number of extremely obnoxious issues. There are no proper camera controls, which can hinder some of the platforming segments. Additionally, the enemies are insanely aggressive—they move and attack much quicker than your hero, and can easily beat you to a pulp if you’re not careful. Furthermore, many of the bad guys have shields and block your attacks. Whenever your sword hits something, you’re left momentarily vulnerable, which is usually when enemies will strike back. You have a small number of attacks—a standard sword slash, a strong overhead strike, a Zelda-like spinning slice, and a jumping downward stab—yet trying to use these effectively against even the simplest foe is more difficult than it should be. You can block with your shield, and even throw it as a projectile weapon, but it’ll break if you use it too much. There are a number of additional moves and power-ups you can buy, but strangely, you can only equip a few at a time. You can survive more hits than in the old Ghosts’n Goblins games, at least—it takes a few hits before your armor is destroyed, and usually a few more when you’re just running around in boxers. But it’s surprising how quickly you’ll go down regardless, especially considering how long the levels can be. There are a number of checkpoints in between, but if you run out of lives, you either need to continue from the start or reload your saved game.

Which brings up another one of Maximo‘s biggest flaws – the save and continue system. In order to save your game (or transport between levels), you need to pay 100 coins. In other words, if you want to save after every level, you’re left with a paltry amount of leftover cash, which means it’s annoyingly difficult to purchase power-ups. Furthermore, continues are limited. At the beginning, Maximo receives a few death coins, which act as credits. You can earn more by destroying tombstones, but after each continue, the amount of death coins required for a resurrection increases. If you keep continuing, you’ll get to the point where it’s simply too expensive. This ridiculously limited system encourages you to conserve your every life, because they’re incredibly valuable. If you die too many times in a stage (and you will), it’s usually the best to reload your previous save and try to get a perfect run. It’s great for people who want to perfect their stage runs, but incredibly frustrating for everyone else. 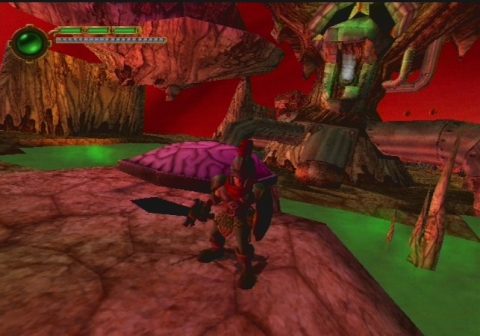 While the core mechanics of Maximo are very well done, but the annoying enemies and frustrating save/continue system really bring it down. If you have the patience for it—and the designers were clearly trying to emulate the infuriating difficulty of the older games – it can be fun, but the sequel is better in pretty much every possible manner.