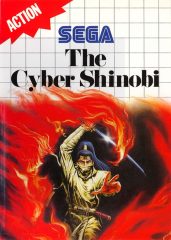 The Cyber Shinobi (or as noted on the title screen, Shinobi Part 2) sounds like it should be an amazing game, since it combines two popular subjects, cyborgs and ninjas, which should result in pure awesomeness. Yet despite the great premise, it misses the mark completely and falls flat on its face. It doesn’t play anything like any of the other games in the series, except inasmuch as it’s a depressingly pale imitation of The Revenge of Shinobi. 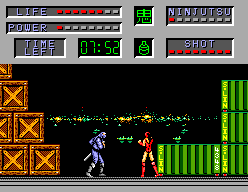 Through six overly long, boring stages, you take on screen after screen of mooks working for Cyber Zeed, the new criminal organization to be defeated. All of the enemies in the area must be killed before you can continue, similar to beat-em-ups like Double Dragon. Your cyber ninja, ostensibly a descendant of Joe Musashi, can only attack with a weak upward thrust that has almost no range, but it doesn’t really matter all that much, because the developers failed to program anything fancy like “competent hit detection“, so you can execute crouching attacks and hit enemies despite not actually being next to them. 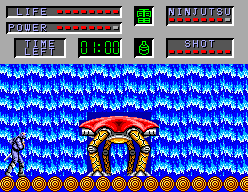 Boxes hold extra items, like shurikens, machine guns (one of the only true “cyber“ parts on your ninja) and grenades, all in very limited quantities and activated by pressing the up button and attack. The ninjitsu magic fills the screen with gigantic, pixelated scrolling text announcing the attack you are using. You can actually stock up to eight magic points (though each use takes two of them), with the higher levels offering more powerful attacks. 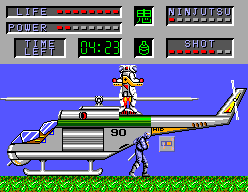 The game looks and controls terribly. The animation is choppy, as is the scrolling. A full third of the screen is taken up by an oversized status bar. The mechanics are clumsy, and the best you can hope for is to get near to a bad guy and mash the attack button until they die, and hope that maybe your sluggish jumping is enough to dodge enemy bullets. It’s not that terribly difficult, although health items only restore a single bar, and the innocuous-seeming platforms that collapse without warning immediately grow tiresome. 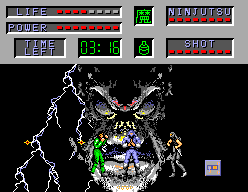 The good aspects include the enemy deaths, where they either shrivel into nothingness or burn to a crisp. Also, many of the bosses are large vehicles that channel some of the more memorable battles in other game, like bulldozers, helicopters and submarines. But otherwise it’s a wretched game, one of the worst on the platform and undoubtedly the lowest point in the whole Shinobi series. It was only officially released in PAL territories (Europe, Australia and Brazil), so it falls outside the Shinobi canon. 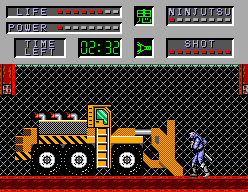