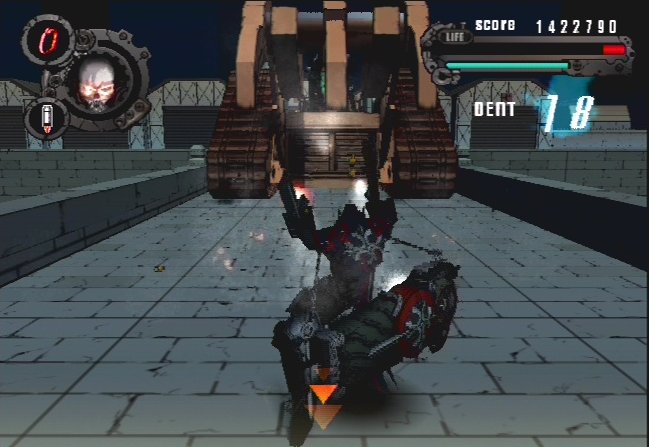 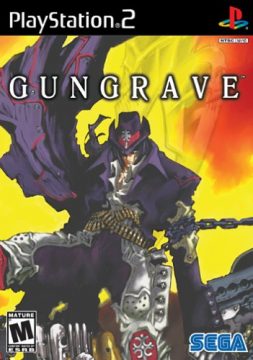 Games have changed a lot in the past decade. Not just the way they look or control, but fundamentally, down to their inner workings. Thus, our expectations as gamers have naturally changed as well. These days, gamers expect every title they come across to stimulate their minds with intriguing plots, dazzle them with amazing presentations, and generally amaze them with various other bells and whistles like gimmicky interactivity and online play. To be successful, every action game needs to have the presentation of God of War, every shooter has to be as immersive as Half Life, every fighting game has to have the depth of Soul Calibur or Tekken.

Gungrave shirks most of this, as the emphasis is on action, action, action. It’s brainchild of Yasuhiro Nightow (Trigun), with mechanical designs from Kōsuke Fujishima (Ah! My Goddess, Sakura Taisen, some of Namco’s Tales series), developed by Red Company (Bujingai, Thousand Arms, many other niche titles) and published by Sega, Gungrave represents the culmination of many great minds coming together to create something unique, visually striking, and most importantly of all, entertaining. 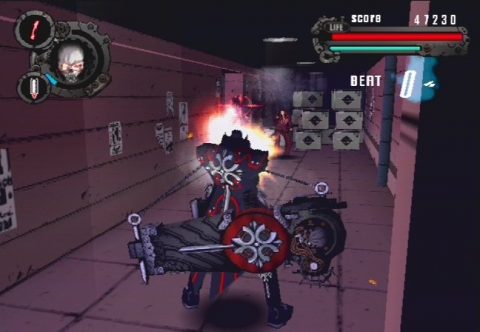 At first glance, Gungrave is your typical tale of revenge, and indeed that glance is pretty accurate, because that’s essentially what Gungrave is. What sets it apart is the way the weathered premise is presented. From the moment the game begins, and the amazingly beautiful, cel-shaded cutscenes start, with the distinctive folk jazz style of Tsuneo Imahori (Trigun, Cowboy Bebop) blaring through your speakers, you know you’re in for a very unique experience.

The story of Gungrave revolves around a man named “Beyond the Grave”, an undead gunslinger who’s brought back to life to destroy the crime syndicate that killed him. This shifty organization, called Millenion, has taken over the city with the help of a new drug called “Seed”, which turns people into powerful, hideous mutants. Helping him is a scientist named Dr. T, an old friend of Brandon’s (Grave’s former self), and Mika, a mysterious young girl Brandon swore to protect before he died. 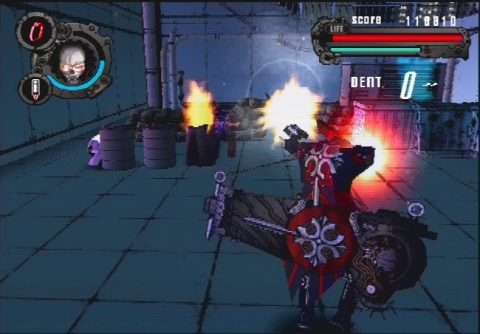 To battle the syndicate, Grave is armed to the teeth. His two pistols, which together are called Cerberus, and the huge coffin he carries on his back that functions as a bazooka, chain gun, and giant bludgeon, make him a one-man arsenal. Pressing square makes Grave shoot his pistols. If you stand still and mash the square button, Grave will begin going ballistic like something out of a Robert Rodriguez movie, dancing around like a mad man while plugging countless rounds into any enemy within range. His auto-targeting is extremely competent, but you can also manually lock on to a single enemy by pressing and holding L1. Pressing X makes Grave jump or dodge in any direction, depending on whether you’re standing still or moving. The jump is only useful in situations where you need to clear an obstacle, but you’ll be making use of the dodge quite often. While dodging and shooting, Grave will let out a quick burst of shots at a target. This is extremely useful in boss fights that require lots of dodging. Grave can also swing his coffin around like a huge bludgeon, taking down pesky enemies that get too close. Although Grave walks incredibly slow by default, he’ll speed up tremendously by holding down the Circle button, although it’s much more comfortably mapped to R1, because you’ll want to be speeding along nearly all the time. There’s some nasty slowdown when there’s a lot of enemies around, but oddly enough, it contributes to the style (think “Bullet Time” a la Max Payne.)

While shooting up everything in sight, you will perform a “Beat” combo that signifies how many shots you’ve chained together in a certain amount of time. This not only includes enemies, but certain objects like cars and dumpsters as well. You can use these objects to boost your number of beats in between waves of enemies and give yourself a higher score. When the beat counter reaches a certain level, you’ll begin acquiring Demolition energy. This energy is used to perform a special Demolition Shot attack. 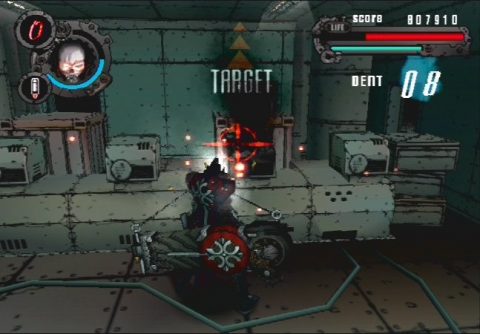 At first, Grave’s Demolition Shot: Death Blow is just a standard bazooka shot that explodes and kills anything directly in front of him. As you gain points by performing long beat combos and taking out enemies in stylish ways, you’ll unlock more Demolition Shots. The second one you unlock is Bullet Dance, where Grave uses his coffin as a chain gun and spins around doing damage to everything in range, and after that, you get Hellhound Roar and Raging Inferno, which are stronger versions of the previous two Demolition shots. You can also use one of your Demolition shot stocks to heal yourself, and, occasionally, you can use a stock to perform a special finishing move on a weakened boss.

Gungrave feels very much like an arcade game. It focuses on bombarding you with intense bouts of button-mashing violence rather than going into any sort of depth like a modern shooter. Also, like an arcade game, it’s very short. There’s 6 stages that take about 20 minutes to half an hour to clear, for a grand total of about 3 hours. This will obviously put off a lot of players, but remember, this game isn’t trying to be long, and despite its length, it turns out very satisfying, thanks in large to some very enjoyable boss fights. As you’d expect from a game like this, there’s goodies to unlock that’ll keep you replaying, like a neat little character gallery that’s presented like an action figure shop. 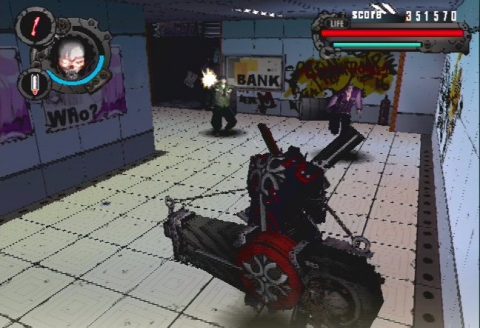 Gungrave‘s presentation is probably its strongest point. Nightow’s conceptualization has created a world that while occasionally shows hints of Trigun, is an entirely unique and distinctive experience all its own that turns out to be much darker, colder, and grittier than his magnum opus of an anime. The action direction is superb and stylish, and easily rivals the action direction in any major Hollywood production. The cutscenes remain some of the best on PS2, which is quite a feat considering that Gungrave came out fairly early in PS2’s life cycle. The characters are computer rendered, but are designed to look like traditional anime (similar to Breath of Fire: Dragon Quarter but better), again lending a distinctive feel. The quality has only recently been matched by the cutscenes in later PS2 games like Rogue Galaxy. 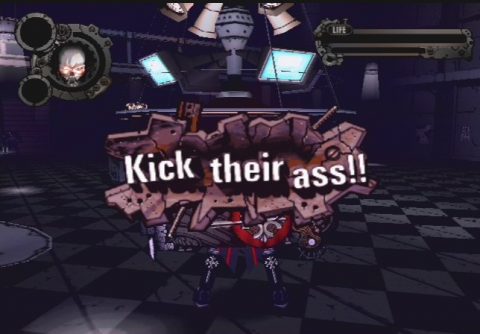 Gungrave‘s in-game visuals are also very impressive, so much so, in fact, that the transition from cutscene to action is sometimes too smooth to notice if not for the delightful “Kick Their Ass!” message that appears at the beginning of every stage. All of the ingame graphics used a cel shading type technique, which, along with the outstandingly skilled use of color, gives the whole game a dark, comic book style feel. Some rough models aside, Gungrave looks really slick. Also helping Gungrave‘s presentation along is a superb soundtrack scored by the previously mentioned Tsuneo Imahori, who also composed Trigun and worked on a few of the more popular tracks in Cowboy Bebop. The ending song, “Here Comes the Rain” (which actually has English lyrics), is nice and quite fitting. The game also retains its natural Japanese audio track, which fits well considering the anime style of the game.

Gungrave mostly received lukewarm reviews because of its simplicity, but it was almost universally praised for its striking presentation. You can find it pretty much anywhere for dirt cheap, and for your few dollars, you’ll definitely be rewarded with simple pleasure that doesn’t take any commitment at all.