While there were many follow-ups that came out in quick succession on various platforms, Shadow Dancer is the only true sequel to the original arcade Shinobi, as the gameplay is pretty much the same. It runs on Sega’s System 18 board; the major difference is a considerable graphical upgrade from its predecessor. This is especially noticeable for the main character, who has undergone a drastic overhaul and now wears a cool white costume similar to the one in The Revenge of Shinobi. This time you play as Hayate, Joe’s son, as it’s set several years down the line.

New for this game is Hayate’s canine companion named Yamato, who follows him throughout the game and will periodically incapacitate foes, thus allowing for an easy takedown. Another visual treat is that casting ninja magic shows a cool cinematic close up of Hayate, with a background of colored burning flames behind him. Other than the dog friend, the changes are minor. The enemy organization this time is known as Asian Dawn, who has commandeered the Space Shuttle Olympia, and has planned to use it to launch an attack via satellites. In order to distract the hero, they have planted bombs everywhere, so these need to be defused in every stage before proceeding.

The levels include an airport, a junkyard, a cave, and final base at the foot of the space shuttle. The bonus stages are similar to the previous game, although now you toss shurikens upward at ninjas that are slowly descending a building. The bosses are not quite as inspired, though it does include a slightly silly “man vs. train“ fight – fundamentally it’s not that much more ridiculous than the helicopter from the previous game. While Shadow Dancer is sometimes viewed as a step backwards compared to the advances made by the almost-simultaneously released Genesis title, The Revenge of Shinobi, it still recaptures the knife-flicking intensity of its arcade predecessor and is a fine sequel.

Since the Genesis game is entirely different from the arcade original, “true“ ports of Shadow Dancer were mostly available in Europe. The Sega Master System version was only released in PAL territories and Brazil, and the hero has been renamed Takashi. While it admirably captures the huge character graphics, it’s simply too much for the 8-bit system to handle, as it controls and plays horribly. The graphics are inconsistent, ranging from decent to awful (many of the bad guys have green skin) and it flickers with the intensity of hell. Your dog friend doesn’t follow you anymore, but he can be summoned to bite enemies. It’s missing several levels too. The soundtrack is all new, since the system couldn’t handle the percussion heavy sound arcade game, so the replacement songs are more “video game-y“. 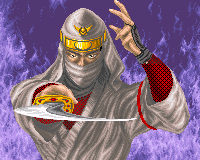 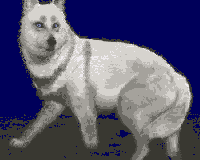 The home computer platforms received several ports, with roughly the same differences as Shinobi, only MSX and IBM versions were not made. The 8-bit computer versions lack music, but otherwise they’re more complete than the Master System port. 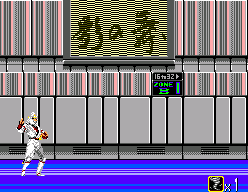 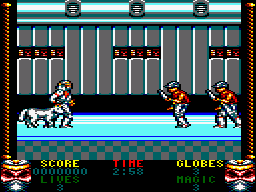 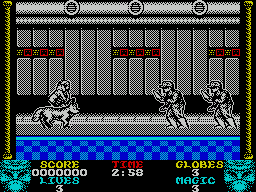 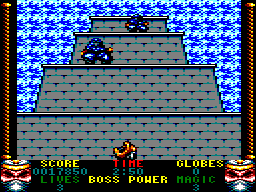 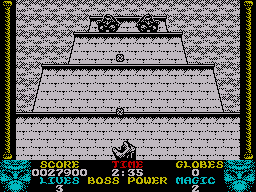