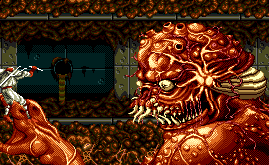 Widely regarded as the best in the series, Shinobi III: Return of the Ninja Master takes everything that made The Revenge of Shinobi awesome and gives it a karate kick in the pants. Four long years had passed since the launch of the Genesis, and plenty of graphical evolution had taken place since then – so Shinobi III looks damn good. The story is the usual, with Joe Musashi taking on the newly resurrected Neo Zeed organization once more. With the addition of a dash maneuver (and a running slash), the gameplay has gotten quite a bit faster, which was one of the only real shortcomings of its predecessor.

There are a few new moves as well, including a block maneuver you can use at any time (as opposed to when powered up like in The Revenge of Shinobi), and a jump kick to strike from midair. As before, melee attacks are executed when enemies are closed enough, and blocking is done by holding down the button. There is a hidden cheat code that allows you to map the block, melee and shuriken attacks to different buttons.

In general Joe Musashi has become much more agile, and he can now wall-jump and grapple along ceilings. The difficulty has also been tuned a bit, although it’s still no walk in the park, especially in the final stage, where you need to put all of your acrobatic skills to the test to leap between narrow electrified walls and ceilings.

Shinobi III continues the series tradition of excellent boss designs, but the design also seems influenced by the Contra games, featuring “vehicle“ stages and some really cool set-pieces. One level takes place in a huge cave of biological goop, with some strange creature in the background visibly targeting your ninja. Naturally, you face this thing at the end, and he’s one of the most gruesome looking creations seen on the Genesis. Other notable boss fights include a mecha-Godzilla type robot, and a final battle in a colorful, spacey virtual field, similar to a battle in Contra: Hard Corps.

One level occurs on horseback while another takes a radical page from Teenage Mutant Ninja Turtles by giving Joe Musashi a surfboard. A later level has you climbing a long vertical mountain by jumping from falling bits of debris, although badly timing your double jumps can send you to your death. The penultimate stage is also a tribute to the maze-like castle in The Revenge of Shinobi, as well as a variation of its final boss (though there’s no time limit this time, thankfully). The level design isn’t as tight as some similar Konami titles, but it’s still one of the best action games on the Genesis.

The music is no longer supplied by Koshiro, and is instead provided by Hirofumi Murasaki, Morihiko Akiyama and Masayuki Nagao. It’s an excellent soundtrack, providing more complex compositions than typically seen in video game music. While generally not as melodic or immediately memorable as Koshiro’s tracks, it utilizes digitized samples much better than most titles on the system, and is generally in a class of its own. 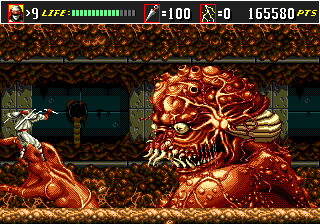 What is rather confusing is the naming convention. In Japan, the title is The Super Shinobi II, clearly showing that it is the sequel to the first Mega Drive / Genesis game, and that the gameplay should be different to the arcade titles. However, the Western releases deemed it Shinobi III. So which was supposed to be “Shinobi II“ then? The Revenge of Shinobi? Shadow Dancer? Or perhaps the atrocious The Cyber Shinobi? Who knows.

While it was a Genesis exclusive in its time, Shinobi III has since been included in both the Sega Genesis Collection (PS2, PSP) and Sonic’s Ultimate Genesis Collection (PS3, X360). It is also available on Steam for Windows PCs, and as an iOS app – like this is the kind of game you would want to play with touch-screen controls only!

When Shinobi III was originally previewed in magazines, it featured screenshots of areas and enemies that were totally different from the final release. Two beta ROMs have leaked onto the internet showing many of the elements that were altered.

The first beta is almost entirely different, showing off a huge number of stages that are completely unlike the final release.  Unused areas include a night-time stage in a Japanese castle, a canyon, and a refinery. Previously unseen enemies include a mid-boss with a gigantic machine gun, a muscular dude with an extending arm and some kind of mutated tiger. There’s also a fifth ninjitsu power called Hakuiru, which uses the power of ice and freezes everything on the screen, thereby making all special attacks analogous to the ninjas in the Game Gear games. There’s also a strange hidden puzzle game.

The second beta ROM is much closer to the final game, but with several subtle changes (including enemies which appear to be riding Return of the Jedi-style speeders), and a variation on the labyrinth level that removes the maze elements.

The 3DS version has sleek 3D effects, as well as a stage select and a mode which lets you remap the melee, shuriken and block commands to different buttons without having input in a code.