Seven years after the last proper installment on the PS2, Shinobi returned in 2011 on the 3DS. In Japan appropriately titled Shinobi 3D, Sega’s Western divisions apparently decided to compete with Ninja Gaiden in naming confusion, so it’s now the fourth game in the series that’s just called Shinobi (after the original, the first Game Gear game and the PS2 release). This entry was outsourced to American company Griptonite, mostly known for licensed titles on various handhelds and download services. The team later went on to create the excellent Volgarr the Viking. 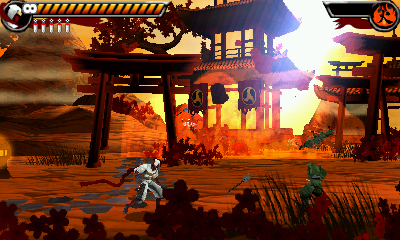 Griptonite decided to use Shinobi III as their role model. Aside from similar gameplay, you’ll also see a lot of enemies and set-pieces taken from both Super Shinobi games. Like those two, the new Shinobi opens with a stage seemingly set in feudal Japan, before it switches to more futuristic stuff; only this time, it’s really set in the 13th century, and Jiro Musashi is then teleported through time into the future for unknown reasons. Here he gets captured by an equally unknown military force, but a fly from his time that sat on his sword during the transition wakes him up and kills everyone, except one female soldier because… he always wanted a rival slash potential love interest that goes nowhere? According to one of the developers, there was a more elaborate storyline planned initially, but much of it was cut because the company contracted for the cutscene animations had trouble meeting the schedule.

Cutscenes like that are interspersed throughout the game. They’re hand-drawn (no 3D effect here), but the animation is minimal – think Neo Geo game intro quality. They’re usually short and speechless save for some random quotes from Bruce Lee’s philosophical journal, but what makes them annoying is that they can only be skipped after watching them once and when the game saved the status, which only happens at the end of a stage or when hitting retry at a game over. So frequently quitting and retrying forces you to watch them again and again. 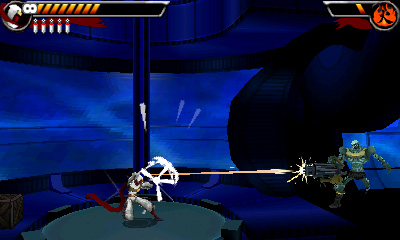 Longtime fans will feel right at home from the start, as all the abilities from Shinobi III are back. Walking / running is now conveniently executed with the analog nub instead of double-tapping, making the game feel faster paced. There are separate buttons for the sword and shurikens, and the throwing daggers are now drawn from an infinite pool, although Jiro can only throw five at a time. Afterwards they recharge slowly, making their use tactical rather than a question of resource management. The four ninja magic techniques add additional shuriken-strengthening traits; the suicide bomb has been replaced by temporary invincibility and super strength, which leaves the hero with just one speck of health.

But Jiro also has a couple of entirely new tricks up his sleeve, like a grappling hook that can be shot straight upward to cling onto ceilings, and he can also slide to pass under low passages (unlike Joe Musashi, Jiro can’t walk in a crouched position). The rest of the abilities are all related to sword fighting: the right shoulder button can be used to deflect attacks (similar to Shinobi Legions), although the timing has to be spot-on. When an enemy is unaware of his presence, Jiro can take him out silently, Tenchu-style. Finally, melee attacks are now chained into strings of combos, and there are several new moves, like a sliding attack, a slash that lifts enemies into the air, and a guard-breaking charge attack. 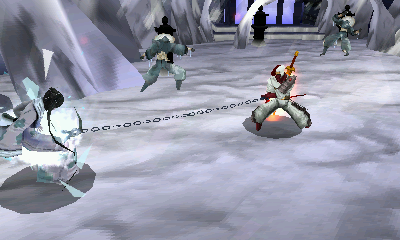 But don’t worry, Shinobi doesn’t turn into a Devil May Cry combo fest. The basic enemies still go down with a single stroke and even tougher ones don’t last long either, but they can be juggled further to maximize scoring. Blocking an entire machine gun salve with your sword and then destroying your foe with a fluid counterattack just feels great, and when things go wrong you’ll always know it’s your fault.

The system to determine your score is quite elaborate. Striking and killing enemies will grant points, of course. Blocking attacks will also raise the score, but getting hit is punished with a deduction. A special meter can be built up with combos for even higher scores. Each additional level raises the score multiplier and makes Jiro’s weapon glow brighter, but take one hit and it all goes back to zero immediately. Finally, at the end of each stage you are penalized for running over the par time or using magic. 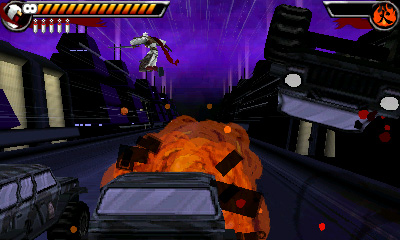 What makes the new Shinobi a worthy follow-up to the classics is the brilliant stage design. Right in the first stage the game demands a well-timed combination of the double jump and grapple hook. Each stage has at least one hard to reach or hard to find hidden area, and just like in the good-old days, the game gets hard quickly, and excruciatingly so.  The once again awesome bosses range from old favorites like the helicopter, to a huge robotic shark. The only downside is that the levels do tend to be a bit on the long side. Unlike the previous games this one is saved after each stage, and you also get unlimited credits. However, lose your last life in the boss fight and you’re tossed back the beginning of the stage – unless you’re playing on the easiest of the four difficulty levels, which not only makes the enemies weaker but also grants unlimited lives. “Hard“ and especially “Very Hard“, on the other hand, make even the original games look like child’s play.

Griptonite even brought back the cool shuriken shooting range bonus stage from the 1987 classic, although it’s a bit easier to win here, and awards further bonus points instead of extra lives. Only the parts where Jiro rides various vehicles in an angled perspective are a bit dull, but nowhere near as long and boring as in Nightshade. In a desperate attempt to use more functions of the 3DS hardware, the surfing sequence is controlled by tilting the handheld. That doesn’t make it more exciting though, but only more awkward to control. There’s also some missed opportunities, like when Jiro jumps on a rocket, and then the game just cuts to him already at his target. Now that could have made an interesting tilt-controlled sequence. By far the best of the bunch is the ride on the After Burner jet, if only for the awesome use of that game’s theme music. 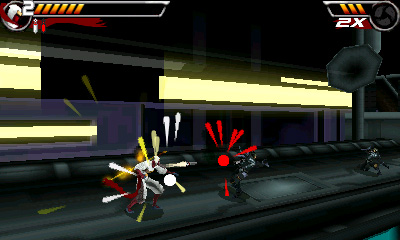 Otherwise the music consists of a much more usual modern action game rock/techno soundtrack, ditching the jazzy vibe of Shinobi III and the many different styles from Revenge. It does keep lots of generic “oriental style” melodies and chinese flutes, the kind you’d hear in martial arts movies. No doubt this soundtrack is more befitting to the game than the Genesis ones, especially with its faster pace, but it’s also less memorable. The exception here is the excellent, almost Western-like main theme, which will haunt your mind long after you’ve shut off the 3DS. If Sergio Leone had ever made a ninja movie, surely this is what Ennio Morricone’s soundtrack would have been like.

Unfortunately, the 3D is simply not very good. There is no angle you can hold the 3DS at to prevent some object creating faint duplicate images, and most of the time one of those is Jiro himself. In 2D the game looks decent despite PS1-era detail levels, and every area has a particularly dominant color. So you’ve got orange stages and blue stages and white stages, but when a stage is orange, it’s very orange. 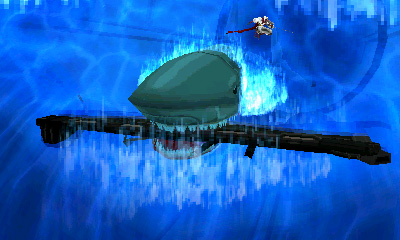 The main adventure is only about as long as Shinobi III, but Griptonite packed their game with a ton of replay value, and then some. Besides the excellent scoring system, there are dozens of “achievements,” which unlock a myriad of different extras. All beaten levels can thankfully be selected seperately in “Free Play” mode to hunt for missed achievements and higher scores. There’s the obligatory artwork artwork and movie galleries, as well as a music test, whith every single item hidden behind requirements ranging from “Complete level X” to “Beat the final boss without taking any damage.” A neat little extra is the “history” menu, which spills trivia about all the previous games.

But you also get different costumes and weapon replacements (including a golden axe, a chainsaw and a chicken!), and even cheats in “Free Play”. The most significant option is the opportunity to play as Colonel Sarah Krieger, Jiro’s helper from the story mode. She has all the same acrobatic maneuvers, but feels a bit lighter in the air. Unsurprisingly, she has to fight without ninja magic and doesn’t wield a katana, so her only melee option are her kicks. It takes much longer to defeat enemies that way, and instead of the counter she only has a backflip dodge. But Krieger is specialized in firearms combat instead. Contrary to Shiro’s limited recharging shuriken, she can fire a large magazine before she has to reload for a second. Certain parts of the game are still far more difficult for her, especially fights against enemies with strong defense. 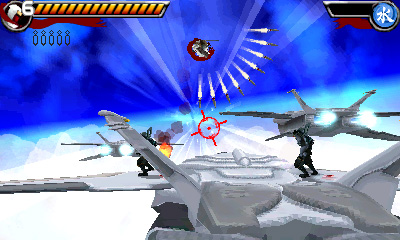 Finding two skull coins in each of the eight stages opens access to difficult VR challenge maps, which largely focus on Jiro’s platforming abilities. Thirteen more can be unlocked by meeting other players via Street Pass (or by using up the Play Coins you get for running around with the 3DS set to standby). Here you get to run around in an 1987 Joe Musashi memorial outfit, but all of them demand perfect control of your ninja skills, as every single hit is an instant kill. It requires a lot of time to master them all.

There are few other classic game reimagenings that do such a great job at modernizing a franchise while still capturing the original’s spirit as well as Shinobi 3D. It effortlessly plays in the same league as Bionic Commando Rearmed and Contra 4. While not quite perfect, considering the mediocre graphics and botched 3D, it’s one of the best games in the series.