The PS2 Shinobi was off-putting to many people, but it found its niche despite not being nearly as popular as other action games like Devil May Cry. Its sequel Kunoichi (cryptically renamed Nightshade for overseas release) features a ninja woman named Hibana, clad in a tight white-and-red sentai-style outfit, with a cool mask a la Hotsuma. She’s missing the snazzy scarf and instead has a long bandana that trails pink shadows as she runs. Her goal is to fight against the evil Nakatomi Corporation, which has unleashed demons across Tokyo to find the shards of Akujiki, the sword from the previous Shinobi game. 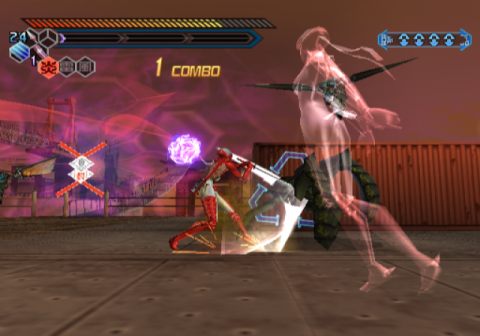 The gameplay has been given a slight tune-up, fixing some of the flaws of its predecessor but also introducing new ones. Most of the changes revolve around making it substantially easier; there are several difficulty levels to chose from, including a “beginner control method“ for newbies. There are also now quite a few mid-level checkpoints. These make dying less of an annoyance, but the stages feel disjointed as a result, since the game is constantly fading in and out to load. Since Hibana does not wield Akujiki, her health does not deplete like in the previous game.

Tates are handled a little bit different now – every time you finish a combo (or grab power-ups), a tate meter fills up with energy. When filled sufficiently, it allows Hibana to send out a projectile image of herself, doing lots of damage when following on from a high combo. This makes boss battles much less of a headache than in the previous game, as it’s much easier to tate them. Also new is a jump kick maneuver, which breaks down enemy shields and allows for even more crazy midair dashing action. 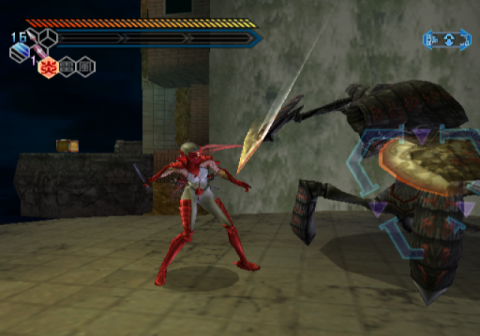 In spite of the improvements, Nightshade still carries its fair share of aggravations. With the jump kick attack there’s even more emphasis on floating above empty space, and thus more opportunities to fall into pits. The graphics are still dull and repetitive, arguably looking worse in spots. And while the level design has improved, most areas still consist of the same tunnels and open rooms as before. There are a few levels that take place on vehicles, maintaining a Shinobi tradition. In the first stage Hibana rides on top of a jet, flying through a cityscape while attacking enemies and deflecting missiles. And while it’s kinda cool to jump from boat to boat as they’re being sunk by torpedoes, these stages last far too long and lack any checkpoints. 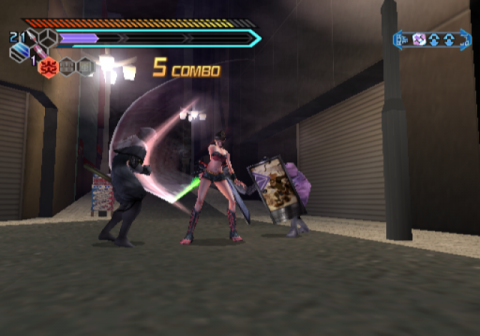 It features even more unlockables than Shinobi did. There are now four playable characters; the first to unlock is Hisui, another lady ninja and Hibana’s rival in the story mode, who fights with an umbrella. Furthermore, Hotsuma and Joe Musashi make their return, both with their individual strengths and weaknesses from the former game. The girls also get several different costumes. 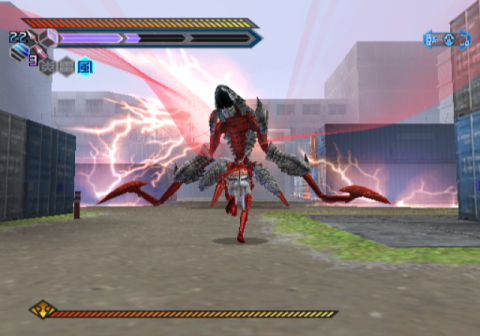 Nightshade is definitely a more refined game, but it still feels low budget. The edges that needed to be smoothed out are still pretty jagged. Also, Nightshade came out just a few weeks before Tecmo’s 3D Ninja Gaiden for the Xbox, which trounced it in pretty much every way. In spite of this schooling, Nightshade is still rather decent. 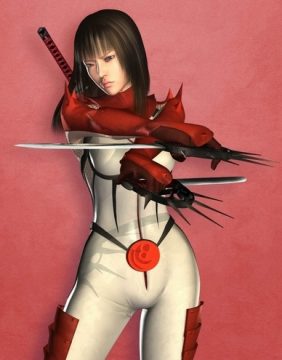 While you can’t tell from the in-game screenshots, Hibana’s character design seems inspired by Chiaki Kuriyama, most well known for her role of schoolgirl Go Go Yubari in Kill Bill Vol. 1, but also acting in other famous Japanese movies such as Battle Royale and Shikoku.