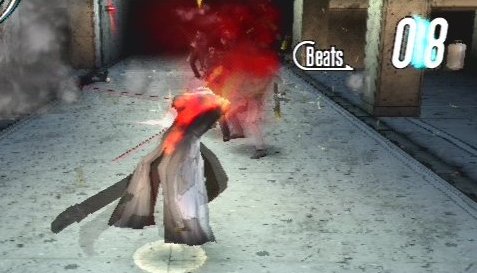 It seems that Gungrave was just popular enough to warrant a sequel, but not popular enough for that sequel to retail at full price. Overdose, was not published by Sega this time around, was released by Mastiff (also known localizing for La Pucelle Tactics and Gurumin) in the states as a budget title for the mere price of $14.99.

Overdose picks up about 3 years after the first Gungrave. The last remnants of Millenion are coming together in an attempt to revive the syndicate and put Seed back on the streets. Naturally, Grave’s back, along with Mika and a somewhat mysterious new companion, to put an end to this upstart before it can even really begin. But this time, things get complicated. Early on in Grave’s mission, he runs into two new characters who seem to have the same plans as him. After some quick quarrelling, they introduce themselves properly and decide to work together to bring the syndicate down once and for all. 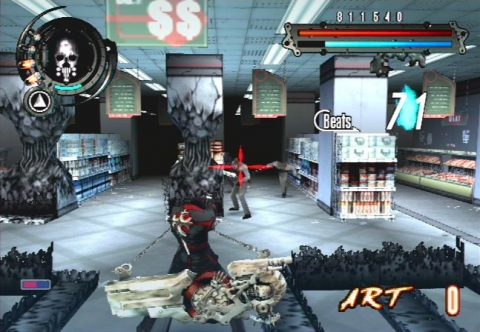 Joining Grave this time around are zombie samurai Juji Kabane and ghost rocker Rocketbilly Redcadillac. After the first mission, you can chose to restart the game as one of these two new characters or continue as Grave. Juji and Billy are completely different from Grave in almost every aspect, and this provides a lot more variety to Overdose compared to its predecessor. 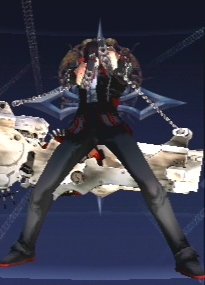 Grave is pretty much the same as he always was, wielding his pistols and slogging along his coffin of death. 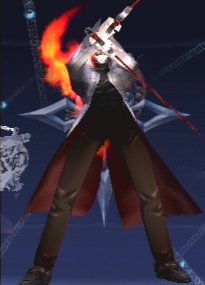 Juji uses a pair of uzis with katana blades coming out of them. He’s extremely agile, but his standard shots are somewhat weak compared to the other two characters. Where Juji excels is in close-range combat, where he can dice up small gatherings of enemies Dynasty Warriors style. 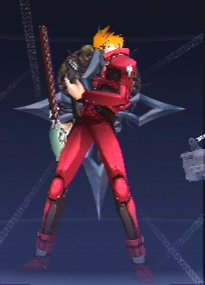 Billy, alternatively, is best played at range. He uses an enchanted guitar to throw bolts of electricity at his enemies. Unfortunately, while the bolts are rather powerful, he can’t shoot them at the same rate as Grave or Juji can shoot their guns, so he can’t handle full-on onslaughts as well as the other two characters, but he excels in boss fights. 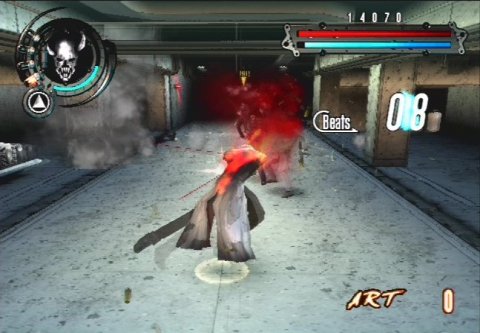 Aside from the two new characters, Gungrave has been changed quite a bit. The general idea remains the same; run through stages mowing down wave after wave of enemies, but now you have a few more ways to do so. One thing that’s been tweaked heavily are the close-range attacks. What was a single-hit anti-siege attack in Gungrave now functions as fully fledged melee attacks that can be linked together in Overdose. Grave can now perform a 3 hit combo with his coffin, the last hit capable of being charged, while Juji slices up enemies and Billy swings his guitar about using telekinesis. Also new to the game are charged shots. Grave and Billy can charge their ranged attacks to unleash a much more powerful shot. The longer you charge, the more shots will be unleashed once you release the button. These attacks are especially good against bosses. Juji can’t charge his shot, but he can charge his melee attacks in the same manner to unleash a flurry of sword waves that slice up anything in front of him. All characters are also set to run without holding down a button, which speeds up the game a tiny bit. The addition of motion blur and more impressively destructible environments also add to the chaotic action movie flair.

The Demolition Shots have returned and still function quite the same, only now each character can gain 9 of them. Really, there’s just 3, and 2 more increasingly powerful versions of each type, making the previous ones useless. Overdose, like its predecessor, also sports some bonus unlockables, including an alternate costume for each character. Overdose pretty much looks identical to the first game, which is a good thing because the first game looked great. The resolution has been lowered, but that’s also a good thing because it hides some of the flaws in the character models. The music is also of the same calibre, much of the more thematic material returning untouched from the previous instalment. What bothers me a little is that they opted for English voices this time around, and it’s a fairly poor, albeit typical job by the voice actors. Another problem is that the recording quality for the in-game is extremely poor, many of the voices sounding very scratchy and annoying. Most of the enemy taunts were left in Japanese too, with them yelling out “kuso!” and “ike!” (“Shit!” and “Go!”, respectively) amidst all of the gunfire. 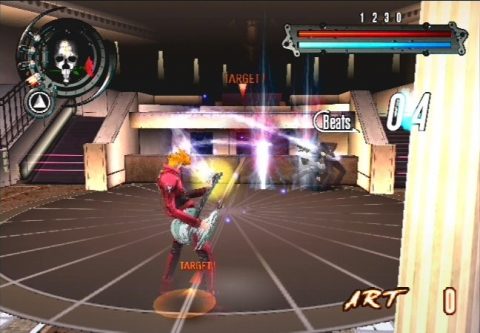 Unfortunately, Overdose‘s presentation, which is where Gungrave really excelled, takes a bit of a hit. The cutscenes aren’t as frequent. Instead, we get a lot of dialog exchanges while watching character portraits change expressions and bounce around the screen in a vain attempt to indicate action. The cutscenes that are there, though, are still really impressive, with excellent cinematics and choreography. It should be noted that once again, Yasuhiro Nightow conceptualized the game, so much of the sense of style from the first game returns here in tact.

Shortcomings aside, Overdose is a much better game than the first Gungrave. It offers a lengthier campaign, more challenge, and a lot more variety – and at the bargain price, you couldn’t have asked for a better game.