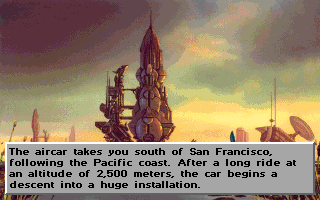 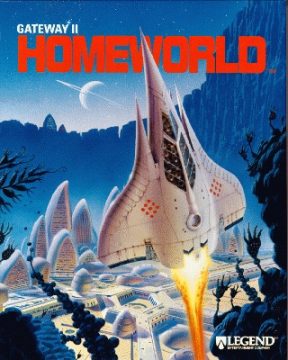 Upon starting up Gateway II, you’re presented with an extravagant little animation of the word “CD-ROM”. Don’t be too alarmed, though – Gateway II, far from being yet another one of the hollow multimedia experiences of the early ’90s (cf. Phantasmagoria) is actually the last of Legend’s games to use its old-fashioned text parser. In fact, the game’s uncompressed data files are only about 25 MB, a tiny fraction of the capacity of the CD.

The flashy animation isn’t entirely misleading, as the few cutscenes of Gateway II are considerably more elaborate than the first game’s animations. Still, they’re rather primitive, low-framerate experiments in early 3D animation. Fortunately, some of that extra size is also indicative of Gateway II‘s increased length over its predecessor, spread out over four chapters rather than three. 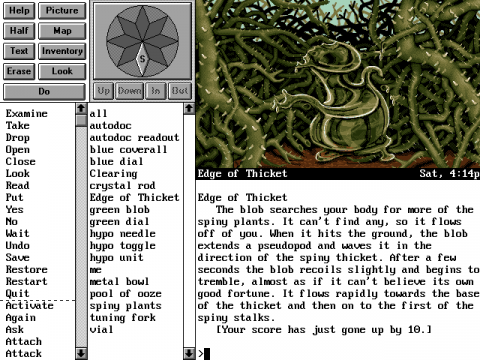 The game begins with your character happily retired on Earth with millions of dollars in the bank after the events of the previous game, when suddenly a large, mysterious “artifact” ship enters the solar system. Plans are made to launch a shuttle to the Artifact, and though you initially only intend to aid in an advisory capacity, the shuttle’s launch site is ambushed by terrorists. Specifically, a doomsday cult named the Phoenix Sect believes the Artifact to herald the arrival of the Assassins, who are worshiped by the Sect despite the race’s well-established civilization-destroying tendencies.

Outwitting the terrorists ultimately leads you to board the shuttle yourself and fly to the Artifact, beginning the game’s second chapter. The Artifact is probably the closest thing in either of the two games to something in Pohl’s books, specifically the setting of Beyond the Blue Event Horizon, Gateway‘s sequel. The Artifact, which turns out to be Heechee in origin, is patrolled by a fearsome robotic monster with a tendency to brutally murder anyone who happens to cross its path, clumsily storing its victims’ personalities in the Artifact’s computer system. You can communicate with these personalities, and even though only one of them has information of real value, the stories told by the others about Gateway and the Artifact do a much better job of establishing an atmosphere than anything else in either of the two games.

Tragically, what might have been a chilling survival-horror vibe is quickly swept away in favor of more space opera antics. Traversing the ship is a matter of working your way through a couple of simulated planetary environments, or “zoos”, inhabited by various life forms somehow gathered by the Artifact. There is one rather nifty little puzzle involving a Heechee gene manipulation machine, but otherwise this section is hardly distinguishable from the planetary visits of the first game.

Taking control of the Artifact ultimately leads to it being taken over by the Phoenix Sect, to your exile to a frozen ice planet, and to more space opera adventures with some lazily anthropomorphized aliens. Finally, in an event that will only come as a surprise if you missed the subtitle, you’ll end up transported to the Heechee homeworld. Unfortunately, the Heechee aren’t about to let you leave, much less help you and risk exposing themselves to the Assassins they fled from thousands of years ago, and getting what you want means insinuating yourself in some ancient political struggles. 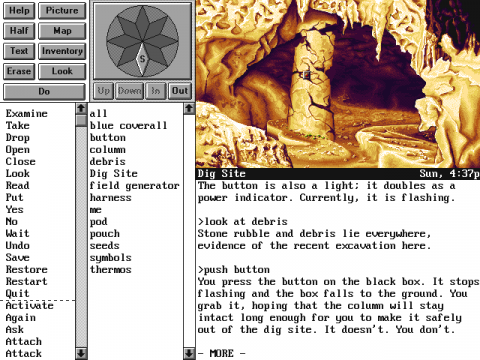 Given that you spend a fair amount of the second and fourth chapters interacting with characters, Gateway II features proper dialog trees. These trees also provide a certain amount of levity, as many of the things you can choose to say are pretty ridiculous. It’s a bit disingenuous, though, as much of the time there’s really only one possible outcome for a given conversation.

The difficulty level of Gateway II is only slightly higher than its predecessor. None of the puzzles are quite as overly simplistic, and the environments are quite a bit larger too. There’s a rather irritating maze in the third chapter, and you have to be pretty sharp to catch the trick that will let you get through without brute-force mapping. Still, in general success once again comes easily if you pay attention and manage to avoid the red herrings.

Pohl’s own followups to his Gateway novel are generally regarded as failing to reach the same lofty heights as the original, but on the whole Gateway II is at roughly the same level as Legend’s earlier game. The lack of a single cohesive setting does give it a slightly more loose, sprawling feeling than its prequel, but the added length makes up for it somewhat.