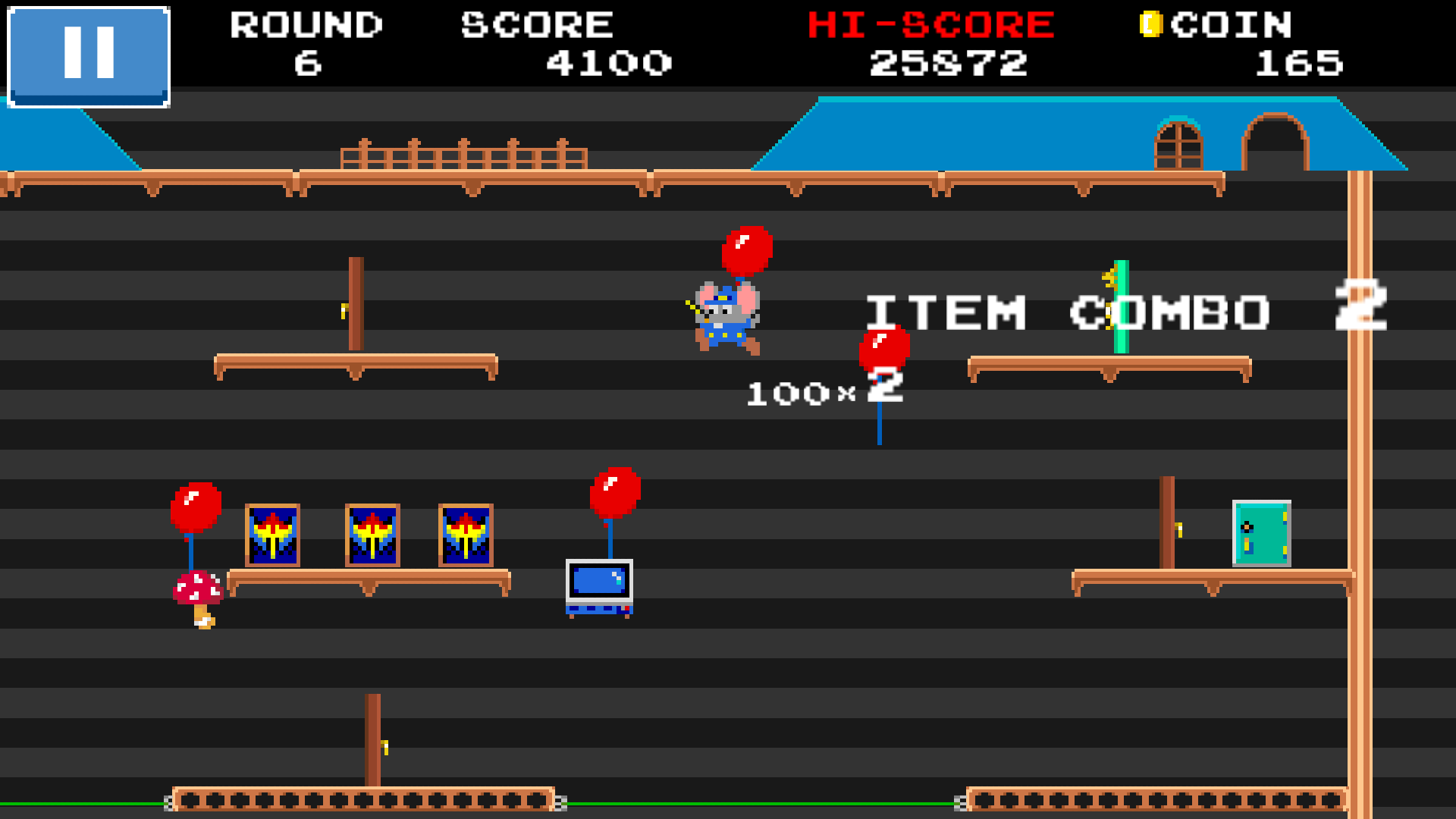 These are two Mappy-themed puzzle games developed for early 2000s Japanese cellphones. Unfortunately they are basically lost to time. 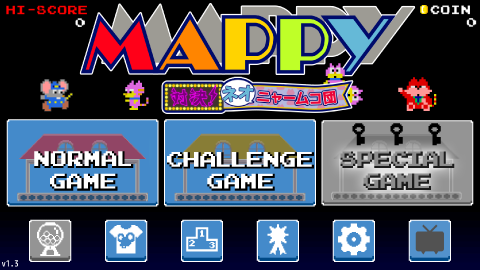 In the early 2010s, Namco unveiled the “Namco Creator’s Program”, which allowed independent developers to license characters from the company’s early arcade games for use in their own games. Most of these (predictably) star Pac-Man, but two were created starring Mappy.

Mappy Taiketsu! Neo Nyamco-dan (“Mappy Showdown! Neo Nyamco Gang”) from Grateek takes the basics of the original game but ditches the strict floor-by-floor layouts in favor of slightly more elaborate, individually designed levels, presented in landscape format. The goal is still to collect all of the items in the stage, though instead of giving extra points for getting pairs, you start a combo by grabbing an item and get increasingly higher points when you grab them successively. Enemies are still defeated by microwave doors and bells (as well as other traps like rolling barrels), utilizing a similar concept. Some levels absolutely flood the screen with enemies, which include the usual Mewokies and Goros, plus enemies from other Namco games like the ghosts from Pac-Man or the foes from Dig Dug. Some levels have bosses too. This concept didn’t really work in Mappy Arrangement, but here it’s better implemented since the levels are designed around staying out of their reach and finding different ways to damage them. 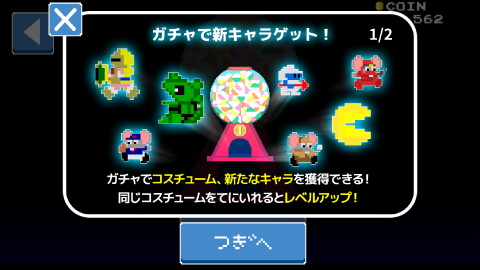 Though the game is ad supported, the free-to-play mechanics revolve around getting different “costumes” (new sprite sets) for Mappy. Some of these are just new outfits (like a heavy metal rocker outfit) but others let you turn him into heroes from Namco games, like Valkyrie, Dig Dug, the dragon from Wagyan Land, and others. When you finish a game, your score is converted into coins, which are used in a gacha machine to determine which costume you’ll get. Alternatively, if you’re connect to the store, you can buy them out right – they cost anywhere from 120 to 360 yen ($1-3 US) each.

The game works well with touch controls, since you can only walk left and right (you need to touch doors to open them). The freeform level design generally works too, with one caveat: the trampolines. In the original game, you couldn’t be damaged by enemies if you were both bouncing, but here, the physics are adjusted that it’s fairly difficult to avoid an enemy if they’re bouncing on a trampoline – it’s best to hope that they’ll simply jump off on their own. Some of the trampolines (and floors) make this more difficult since they’re sloped, which in turn changes the trajectory a bit. Otherwise, this is a pretty decent game, and certainly a better iteration of Mappy than any of the Namco’s older attempts. 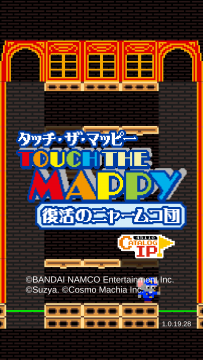 Another game developed as part of the Namco Creator’s Program, this one was actually crowdfunded and development by several Namco veterans, Eiji Sato, the original designer; Hiroshi ” Dotman” Ono ,who was a sprite artist on many early Namco games, and music by Junko “Zunko” Ozawa, the composer from games like Tower of Druaga.

Rather than directly evolving the platforming elements, as with Mappy Taiketsu!, Touch the Mappy: Fukkatsu no Nyamo-dan (“Resurrection of the Nyamco Gang”) rejiggers the concept to be more suited to a touch screen, with it being presented in portrait view. You don’t directly control Mappy, as instead he moves on his own accord. Each level is presented as a minor puzzle, with the goal being to grab all of the objects. You can only interact with the level by touching transparent floors, which will cause it to become solid. If Mappy is next to one of these, he’ll jump off and continue walking forward, so you need to guide him through while protecting him from danger. As with the original game, you get more points to grabbing items in pairs, and there’s definitely an optimal way to beat each stage – you’re scored on this, as well as completion time, at the end of each level, of which there are about 100 total. When you get a high enough score, you’ll unlock pieces of an image of an early Namco Famicom cartridge, which had distinctive designs. The free-to-play version lets you play a handful of levels (or lives) before you need to watch an ad video in order to resume playing. 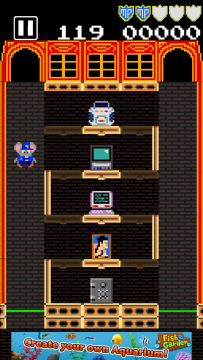 Overall, this is another excellent interpretation, especially since it finds a way to reinvent the basic mechanics while still keeping with the rules of Mappy. The only issue is that some levels are more than one screen, but the game uses flip scrolling, so can’t see the layouts until you actually move there.