Developed by Factor 5 at the same time as Mega Turrican, Super Turrican for the SNES lacks the polish of the Genesis game, but yet it is an interesting one. It features a rearranged Turrican 3 soundtrack optimized for the SNES’ powerful sound chip: just how many games do you think could proudly show the Dolby Surround logo at the time? Typically for the system, it sounds much more soft than on the Genesis, but also loses a bit of its force in the process. The gameplay is once again closer to the first two games: Gone is the Plasma Rope, replaced with a freeze beam, which is much closer in spirit to the original lightning whip, although it doesn’t kill enemies; the always welcome Power Lines return, and even the invisible bonus boxes make a comeback, instead of the ugly chests of Mega Turrican, that couldn’t even be used as stepping stones to find secrets. Whereas previous Turrican games always stood at the forefront of visual perfection for their respective platforms (not counting outsourced ports), Super Turrican is much more humble. Use of the SNES’ special sprite transformations is occasionally effective – for example when the ever popular iron fist boss enters the screen at a fraction of its usual size, only to zoom in just before disappointment ensues – but for the most part subtle, and also quite rare. 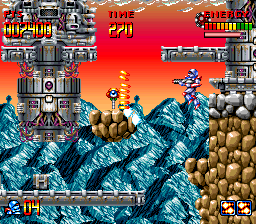 The beginning of the game is a melange of the first worlds of Turrican I and II, whereas the last stage is directly taken from Mega Turrican’s penultimate world, the Alien one. More borrowings from past episodes follow throughout the game; the only stages that are really new is a substage inside of a volcano and an ice world. They feel distant from Turrican’s usual atmosphere, and almost seem forced, as if every console platformer needed them. The ice stage at least redeems itself with a neat gimmick that involves riding on huge snowballs, yet its still the most linear and most boring stage in the game. Mega Turrican’s final factory world that ended with the confrontation against The Machine is simply missing, the game just ends after the Alien boss, despite showing The Machine in the intro and outro.

Super Turrican is really a missed opportunitie. It sounds great, and the controls are even smoother this time, but stage design and overall atmosphere are a bit lacking, and the game feels a bit too short. No wonder: Factor 5 had originally finished the game for a 6mbit cartridge, but the publisher forced them to cut it down to 4mbit to save costs. One can only imagine what has been lost when 33% of the data went into the dumpster. The result is a rushed-ending, flawed patchwork game, that nonetheless manages to recapture a bit of the older Turricans’ spirit. But hey, the game is pretty cool as it is, not nearly as much of a trainwreck as the mutilated Western release of Super Double Dragon. Recommended to all plasma rope haters. 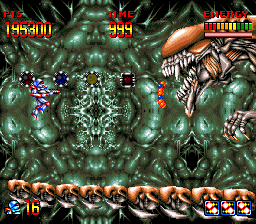 By the by, the folks at Factor 5 apparently had a taste for British humour. The intro mentions a planet named Katakis – a reference to the Manfred Trenz shooter the company ported to the Amiga years before – but this planet is classified as “Mostly Harmless.” This is the same phrase used to describe the planet Earth in Douglas Adams’ The Hitchhiker’s Guide to the Galaxy series.