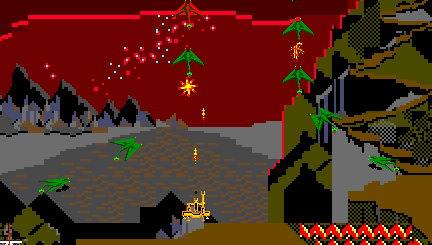 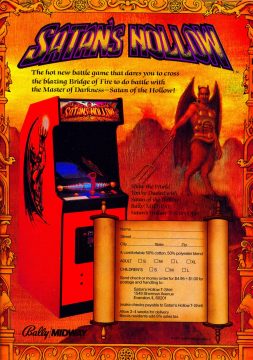 Arguably the game to kickstart the trend of coin-operated stand-up arcade cabinets was Taito’s Space Invaders, the forefather of shoot-em-ups and one of the best-known games of all time. Its massive popularity led to innumerable imitators, the most successful of which was Namco’s Galaga, the biggest early eighties overhead shooter in history. Other such notable games of this mold include Galaga‘s predecessor Galaxian, Nichibutsu’s Moon Cresta, Phoenix by Amstar Electronics, and Gorf from Midway, the company who also received the rights to distribute Space Invaders in America. Midway also merged with venerable pinball and slot machine producer Bally Manufacturing around this time to create the Bally/Midway Manufacturing division. While they naturally focused on creating pinball machines, they also endeavored in electronic entertainment and released several beloved arcade classics, including Tron (based off of the cult sci-fi film), Spy Hunter, and Tapper, among many others. One of the somewhat lesser-known Bally/Midway releases was yet another vertical shooter that was original in several ways: It did not take place in space but rather in what appears to be medieval times, it required you to do more than just move and shoot, you attack demons instead of aliens, and it was about you fighting the dark lord Satan himself. It was christened Satan’s Hollow, and it’s still one of the most badass shmups more than thirty years after its initial release. 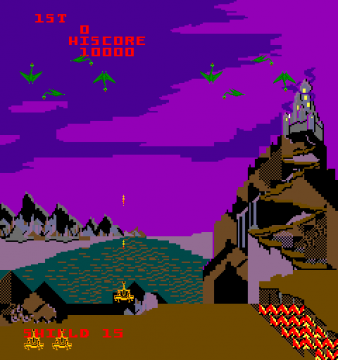 Satan’s Hollow grabs your attention from the get-go by forming the logo piece-by-piece in sparkling fireballs, and when you pop in a quarter and hit the start button, Wagner’s “Ride of the Valkyries” plays in surprisingly clear (for 1981) electronic fanfare. The screen you see before you is a sight to behold, with a gothic castle built on a mountain beneath a dusk purple sky overlooking a ravaged field next to a river made of fire. Your craft is some sort of brass machine gun base that looks ripped right out of a steampunk design book, and your enemies are hordes of winged demons that you have to ward off. You can fire two shots at any given time, and you get three guns to start. Besides your main weapon, you also get a protective shield. This evaporates enemy projectiles and enemies themselves, effectively making it a secondary weapon against the many demons that will attempt to divebomb you. Using this shield causes a meter to deplete from fifteen to zero in a very short amount of time, so you must be judicious with its use or you’ll be out of power when you need it the most.

There are three basic enemy types: Common green gargoyles which drop bombs, red gargoyles who attempt to wreck your bridge (more on that later), and green demons which toss eggs that generate lingering explosions when they hit the ground. Some of the gargoyles have the audacity to fly down past your line of fire and actually attempt to steal one of your spare guns! They fly away slowly, but if you play too defensively and don’t shoot them down in time before they escape, you effectively lose a life. Clearing each wave of enemies has a gargoyle add a flag onto the top of the castle to signify how many waves you’ve cleared up to this point. Normal enemy waves also tend to alternate in between scary large devil heads that blow down streams of fire! These noisome noggins are not actually Satan himself, but are likely projections of the dark lord’s malevolent energy having taken manifest as destructive entities… or they were simply put in because they look cool. Nevertheless, it is tough to avoid their fire breath, and your shield can’t do anything against it, so your best bet is to kill these heads immediately. They grow larger with time, becoming easier targets but worth less points in their three stages of growth. They disappear if you wait too long or are obliterated by them, but they’re worth an extra flag if defeated. 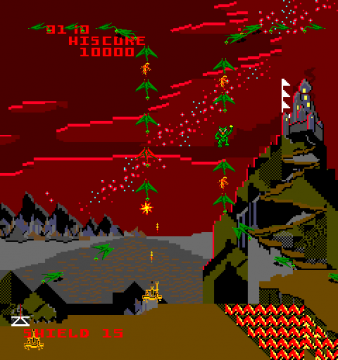 You have a more pressing objective than merely fending off the invading hordes of hell, and it involves what’s waiting on the other side of that fire river. In order to cross the river, you must guide your base to the way left side of the screen and pick up a bridge segment. You must then move over as far right as you can until the bridge piece is placed on the river. A new bridge part will spawn in a few seconds, and you must keep carrying over the bridge parts until it is fully formed. Red gargoyles can drop rocks which will destroy your already-placed bridge bits unless you block them with your shield, delaying completion of the bridge. If it is all built, you can head to the other side of the battlefield and fight the actual Satan! Satan himself ironically looks less intimidating than the floating demon heads, but he’s definitely no slouch as he flies about quickly, constantly throwing down pitchforks (did you expect anything else?) and summons swirling fireballs if you take too long to hit him. Should you smite Satan with a single shot, you gain a thousand-point bonus and an additional thousand points for each flag you have collected, and you even get an extra gun added to your machine to allow a total of four shots. Surviving long enough to banish Satan a second time adds yet another gun for maximum firepower at six shots!

That’s basically it for Satan’s Hollow, which is a bit more involved than your standard fixed-screen shooter but nonetheless simple to grasp. As you can expect, the game gets increasingly brutal for the longer you stay alive. In fact, it gets a lot toastier than Galaga after only a few minutes, with enemies drastically fluctuating in amount and erratic behavior. The atmosphere grows more foreboding as you play on, with the purple sky eventually turning into a deep red and the clouds transforming into ominous black smoke. If you live long enough, it even transforms into pure dark night, but it’s a real trial to survive for more than five minutes. Still, no matter how good or bad you do, simply playing the game is one of the greatest experiences of gaming’s golden age. Even if it’s not as famous as Galaga or as well-known amongst Bally/Midway’s games as Tron, Satan’s Hollow is one of their finest games. It captures fun at its basest element by pitting you against a horde of demons led by Old Scratch. What more could any hellspawn-loathing gamer ask for? 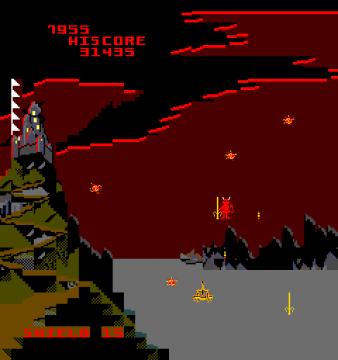 Satan’s Hollow received two home ports to the Commodore 64 and the Atari 8-bit family of home computers. While the C64 has had its fair share of okay to shoddy arcade translations, its take on Satan’s Hollow is quite close to the arcade original. The colors are a bit more pastel, but the graphics are otherwise alike (the sky even darkens the more you play!) and the sound design is similar to the original as well. It isn’t quite as intense, but it still captures the original’s aesthetics alongside most of its ferocity. The Atari port is even less technologically advanced, but it also does an admirable job of playing akin to the arcade version. The graphics and sound are less powerful than the C64, but the base game is still very enjoyable. If you wanted to play the game at home, you couldn’t go wrong with either port, even though they’ve been made somewhat obsolete with modern emulation. Many years later, Satan’s Hollow would finally receive an arcade-perfect port as one of the games featured on the Midway Arcade Treasures compilation released on PlayStation 2, Xbox, GameCube, and PC. A new generation of gamers was hence able to enjoy the finest demon-killing experience a dozen years before the existence of Doom. 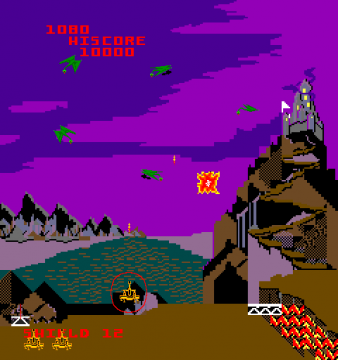 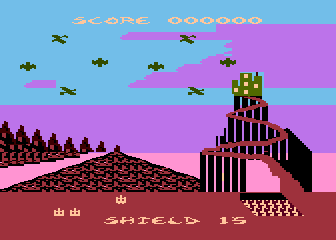 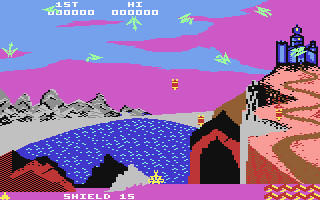