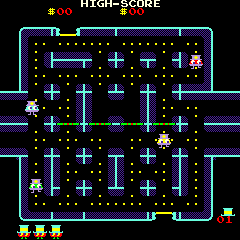 As one of the most, if not the the most well-known arcade games of all time, Pac-Man has more imitators than one could possibly begin to number, especially just after his debut. Most of the early “homages” tend to be pretty weak, although Data East’s particular rendition has enough of a twist to it that it’s worth checking out. You play as the tiny, hat-headed thief Lupin, (No relation) who has to collect all the gold coins in a maze, and then make his escape through the exits at the top or bottom of the board. Complicating this are the four suspiciously ghost-esque cops who chase Lupin around, Smarty, Scaredy, Silly, and, er… Stiffy. Ah, innocent times.

The biggest difference from Pac-Man is that Lupin doesn’t have a power pellet equivalent to dispatch the cops with. Instead, pressing the game’s solitary button will drop a gate onto the board, left at the last pair of blue lines Lupin crossed. These will block off the path of both Lupin and the cops, so placing them in the path of a pursuing enemy will force them to maneuver off of your tail. Lupin can only drop two gates onto the board at once before waiting for one to disappear, which means that if you aren’t careful, you’ll end up running out of gates just when you need one the most. Gates will also open and close themselves within the maze automatically, too, and it’s possible to end up caught in one as it closes and left vulnerable. Every so often, bonus items will also appear on the board, if you want those extra points. 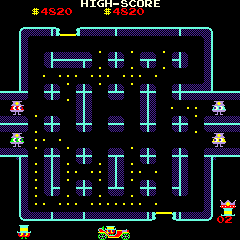 It’s a pretty tough game, at times, even more difficult than Pac-Man. With no way to actually remove the cops from the board, only detour them, it’s a lot harder to avoid them, and a lot easier to get cornered. The only way to get even the slightest break is to grab the bag of money that appears on the board every so often, and all that does is freeze the cops in place for a couple of seconds. It’s definitely a lot more unforgiving than the original Pac-Man, since you’re given so few breaks in the action at all. At the very least, Pac-Man would consider it good enough if you grabbed all the dots off the board.

At the very least, the game has a decent amount of personality to it to help set it apart from its inspiration. It’s a nice touch how Lupin actually drives a car towards the maze upon starting a game, or how the cops burst into tears whenever you collect a money bag. It helps make up for the fact that there’s no intermissions to help mark your progress through the game. The sound is alright, except for a bug where the little jingle that plays when a money bag appears starts to play on loop, which will quickly drive most men to madness.

Overall, Lock N’ Chase is a perfectly functional Pac-Man clone that would be a little easier to recommend if it weren’t so difficult. It’s definitely not a hidden classic or such, but if you’re out to play every variant of Pac-Man ever conceived, you could do far, far worse.

The 2600 version visually bears little to no resemblance to the original, with the cops replaced with creepy, Berserk-esque stick men. The maze has also been simplified, which means it’s more difficult to tell where you can place gates, and the automatic gates aren’t a part of this version, either. It’s not an awful game on its own merits, but so much is missing that it feels like an entirely different game. The Intellivision is far more representative of the actual game, and is about as close to the original as the hardware can get, aside from a slightly smaller maze. The Apple II version is somewhere between the 2600 and Intellivision in terms of graphical and sound capabilities, but generally plays pretty smoothly, if you can deal with a slightly smaller maze and some odd keyboard controls. 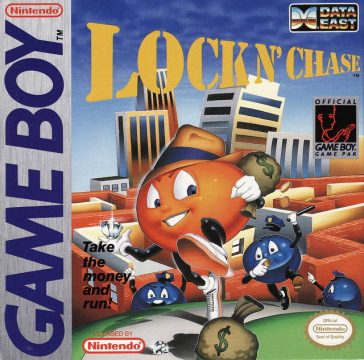 Given how much the original game was such a blip on the radar of arcade history, it’s somewhat surprising to see Data East dig a game like this back up for a revival. Still, the Game Boy version adds on so much to the original game that it’s definitely the superior game, and very much a hidden classic in its own right. The basic concept of wandering a maze, collecting all the gold coins while avoiding the cops, with the much appreciated revision that you no longer have to make it to the exit after grabbing all the coins. While the original game only offered one maze, this game offers a set of six worlds, each of which has three different mazes to clear.

Your main method for dealing with pesky cops is still dropping gates into certain places on that board that you pass by. Thankfully, however, there’s now an addition of a diamond that appears on the maze every so often, which basically works like a power pellet whenever you pick it up. It definitely makes for a much more forgiving game, which is something the original arcade game definitely had issues with. You’ll also want to collect these diamonds for the slot machine bonus game at the end of every world, which will give you the chance to pick up a few extra lives.

What really makes this revival interesting, however, is that it has far more of a puzzle bent to it. Each world introduces a new element to the mazes that you have to deal with, steadily getting more complex as you go. There are gates that’ll only open when Lupin touches them, tiles that make some cops harmless while activating others, and doors that move Lupin around the maze. The first maze of each world is generally a tiny maze that introduce the concept, while the next two stages are larger, making large use of the new element. The final world starts to mix together two elements at once, culminating in a Sokoban-esque puzzle where you have to push a giant key towards a lock, all while avoiding the cops. Once you clear the game, though, there’s an entirely new, more difficult set of worlds to play through that can be accessed through the title screen.

The graphics are simple, yet functional enough on the Game Boy’s tiny screen. At times, it’d be nice to be able to see more of the maze at once, but given the handheld’s resolution, that can be forgiven. The cutscenes depicting Lupin’s escape from each heist are a nice touch, as well. The music, while not very memorable, is pretty upbeat, and there’s some pretty decent variety in the soundtrack. Overall, this particular incarnation is far more interesting than its originator, and it’s definitely worth seeking out if you dig action-puzzle games. 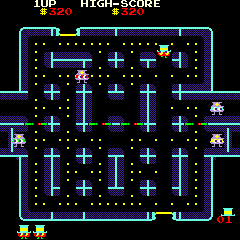 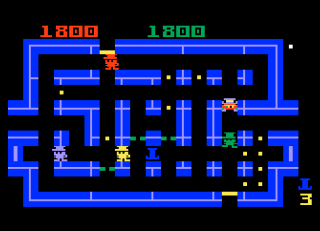 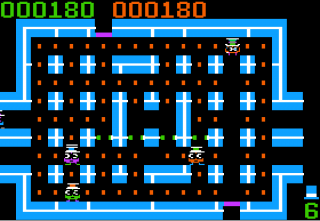 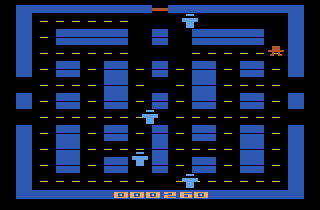