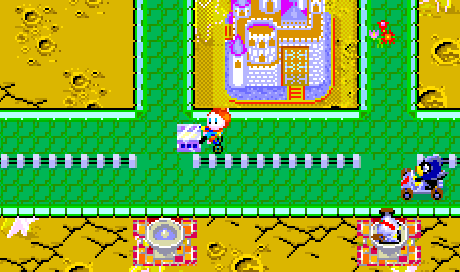 “Spatter” sounds like a rather nasty occurrence, but it appears to be the name of the eponymous protagonist, a cute l’il wide-eyed child riding a tricycle. The American flyer confirms this as his name, and his name is also that of the Japanese version, Sanrin San-chan. (“Sanrin” means “three-wheeled”.) Spatter loves to ride on his trike, but for whatever reason, he’s being constantly harassed by punks driving cars. Perhaps these are high school bullies looking to pick on an unassuming grade school kid, but the game’s backstory is unknown. Nobody knows why you’re riding about on a track high up in the sky or what’s with all the jerks trying to run you down. It appears that they’re actually humanoid birds that spawn from fountains, cars and all. And the ground below you shows off giant cakes and purple striped trees, indicating a sort of sweet fantasy land that’s reminiscent of Fantasy Zone. The graphics are among the brightest ever seen in a Sega game, particularly complimented by the cuteness of your avatar. Whenever Spatter loses a life, he just topples over and says “puff” to indicate that he’s out of breath. Nothing violent, just a goofy animation that meshes well with the sugary aesthetic. The incredibly upbeat music further enhances the game’s saccharine tones, though its high-pitched instrumentation may get a bit grating in prolonged play. 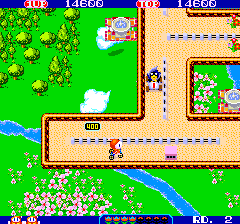 As for how it plays, Spatter appears to follow the basic “collect items and avoid bad guys” routine as Pac-Man, but you don’t have to collect two-hundred-and-forty dots to win. Spatter needs only pick up eight flowers scattered around the maze, but you’ll have to take time and search for them. Unlike most other maze titles which are single-screen affairs, each maze in this game is several screens large and not all of it is shown at the same time. You’ll have to avoid the baddies while picking up flowers, including the aforementioned bird punks in cars. Thankfully, Spatter has the ability to do something most maze game protagonists cannot: Jump! Whenever moving alongside a fence, you can jump into it with the twofold purpose of avoiding enemies in front of you and bumping off enemies on the other side of the fence. 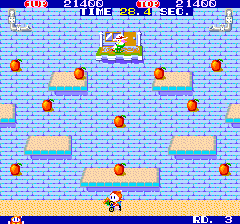 You can only jump if you’re riding parallel to a fence, however. There are segments of maps that only have borders without fences, and if you get cornered in those areas, you’re doomed. In addition to the default bird bullies, you also deal with propeller robots that can’t be hit by your fence bump, but that’s where you get to use the blocks strewn about each level. Simply drive into a block, press the jump button, and Spatter will push the block so that it keeps moving until it hits the nearest maze border. This should demolish birds and robots alike, but there is a third type of enemy, the bulldozer, that is unstoppable. It can’t be bumped nor block-crushed, and all you can do is jump over it or otherwise move around it. 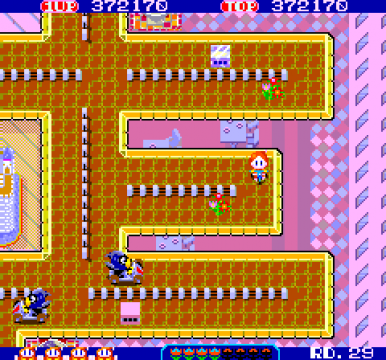 Spatter bears similarities to a somewhat more popular Sega game, Flicky, which was also designed by Yoji Ishii. The goal is to jump around collecting several birds and heading for the exit. It’s the same basic premise, but it plays more like a platformer akin to Namco’s Mappy. Spatter itself takes a vertical shift every now and again; after two levels and every three after that, you play a bonus round which eschews the normal overhead perspective for a Donkey Kong-esque platforming stage. Your objective is to grab as much fruit as you possibly can while avoiding these green thingies that look like eggs fused with baseballs. They keep leaking out of pipes and they don’t instantly defeat you, but they knock you around for a couple of seconds, and your time limit is expectedly short. You don’t have to grab all the fruits, but to claim a bonus, you need to reach the platform in the top-center of the screen. If this happens, Spatter gives all the flowers he plucked to what appears to be his girlfriend, or at least a lady he is courting. Awwwwwwww. 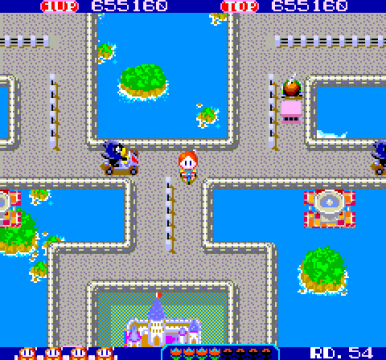 Honestly, the game’s charming aesthetics alone make it worth a look, but it also plays quite well and is more involved than other maze games. The jumping mechanic allows you to travel more aggressively and you can dodge enemies that get in your way instead of having to run away. Being able to squish enemies with blocks is also fun, but then there are the enemies you can’t harm and need to dodge, adding an extra layer of strategy and challenge. Sega preferred to do things their way rather than copy a well-known template, and Spatter isn’t just a cuter Pac-Man, it’s an entertaining maze romp that stands out on its own merits. 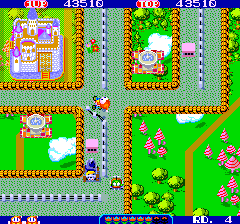