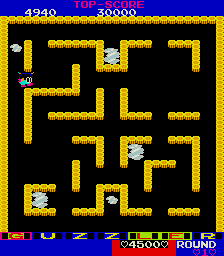 It’s no secret that from 1980 to 1983, Pac-Man was one of the most often-imitated games in the industry. Running around a maze from enemies while collecting various points was easy to create, but incredibly difficult to pull off well. While Guzzler may seem like just another Pac-Man clone at first, from the use of cute characters in a maze, it has several unique features that make it very different from the likes of Lock n Chase and Make Trax.

In Guzzler, you play as Guzzler, an alien with a very unique physiology. Like many Pac-a-likes, Guzzler moves in the four cardinal directions without stopping. Throughout each maze, there are four living pillars of fire which spawn smaller living fireballs which, for this article, will be called “burnlings.” The burnlings follow you throughout the maze, while the taller pillars of fire do not. The goal of each level is to take out the four pillars of fire, but the burnlings move slightly faster with each pillar of fire taken out.

Now what separates Guzzler from other Pac-a-likes is in the “guzzling mechanic.” Guzzler can shoot water from his body up to three times before he is out of water. With each blast of liquid shot, Guzzler moves quicker and gets closer to being an outline with just antennae, eyes, and shoes. In order to replenish his liquid, Guzzler will have to guzzle various puddles throughout the maze. Smaller puddles replenish one of Guzzler’s shots, while larger one replenish all of them. Every once in a while, an alcoholic beverage (usually in a cocktail glass) will appear in the center of the screen. If Guzzler picks this beverage up, his liquid supply will fill to maximum and the burnlings stay in place.

Another unique feature to Guzzler is that similar to many pinball games, it gives you an extra chance after you lose all your lives, based on a wheel with one Guzzler and seven yellow burnlings. Getting the Guzzler guarantees an extra chance. However, this is extremely difficult to do, as the wheel moves slightly faster with each progressing round. Speaking of extremely difficult, that basically describes the game itself. Due to Guzzler moving slower when holding more water, there seems to be a bit of input delay, and whether this was intentional or not, it can really mess up one’s playing when the player needs to turn to shoot at an enemy but ends up walking into the enemy without shooting.

Guzzler was also ported to the Sega SG-1000, published by Tsukada. From looking at this game, the graphical limitations of this port are evident, the mazes are wider than they are tall, and there aren’t always four fires in each level. The game itself controls differently as well, freezing whenever Guzzler shoots water or drinks a puddle. Burnlings are also larger and only red, with less intelligent AI, as they can sometimes walk around in squares without moving anywhere. The alcoholic beverage is replaced with a cracked cyan flask. The most irritating thing about this port is probably the walking sound, which honestly sounds more like a siren and can actually give a migraine after extended play. However, the core gameplay and goals are still identical. Despite these shortcomings, the graphics of the arcade version are vibrant and lively for 1983, and the arcade sounds aren’t grating in the slightest. It may not be as stellar as the later offerings of the company that later became known as Tecmo, but it’s still worth a play if you want another maze-styled game or to see their earlier history during their Tehkan days. 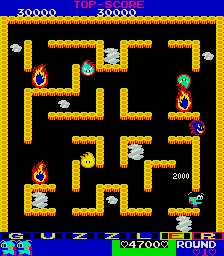 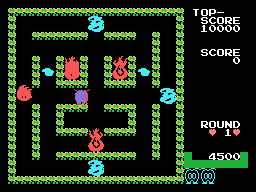