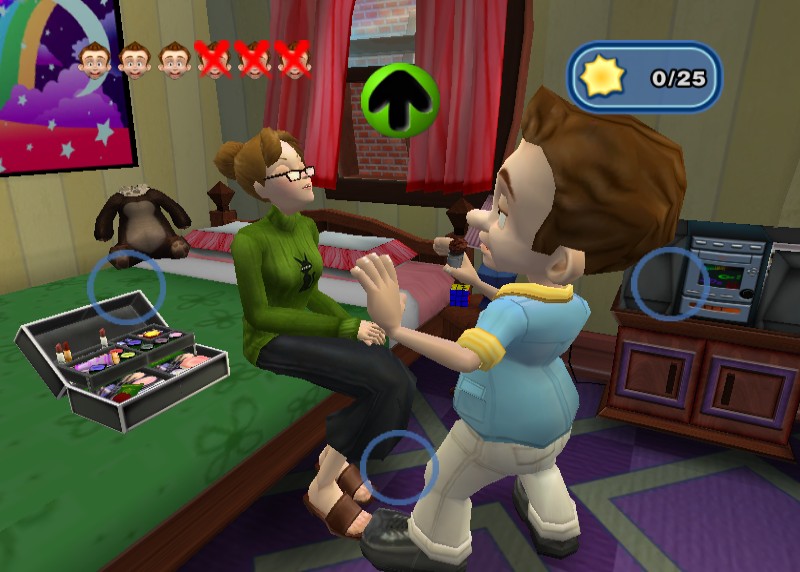 The purchase of Sierra by Havas SA (later Vivendi Entertainment) in 1998 essentially marked the end of an era. In 1999, the original studio for Sierra was shut down, and the few old school game designers that were left were laid off. The release of Gabriel Knight 3 in 1999 was the last adventure game published by Sierra, truly marking the end of an era. However, that didn’t mean that Vivendi wasn’t still interested in their IPs. In 2004, Sierra published Leisure Suit Larry: Magna Cum Laude, developed by High Voltage Studios and positioned as a resurrection of the beloved series. Alas, none of the original staff, including Al Lowe, had any hand in its development.

The focus has shifted to Larry Lovage, the nephew of the infamous Larry Laffer, who makes a few cameos. The new Larry is also a huge dweeb, albeit a much younger one, who still looks up to his uncle. He’s just enrolled in a community college, and has decided to join in the time honored tradition of hooking up with as many girls as possible. His ultimate goal is to make it on the hit TV dating show Swingles, which is shooting their latest episode on campus. 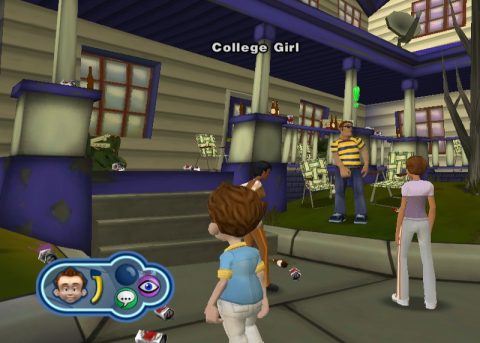 The entire game is in 3D, with fairly average polygonal models. Each of the girls looks a bit like a cross between a Barbie and a Bratz doll, with slender figures and large eyes. They actually don’t look half bad, all things considered, and they’re actually reasonably well animated. Larry Lovage himself closely resembles his uncle, and his hugely deformed body looks particularly bizarre next to the girls.

Since the game was primarily made for consoles, the point-and-click interface has been removed, and instead you control Larry directly. Although the basic template is present, Magna Cum Laude tosses out nearly all of the adventure game elements in favor of lousy minigames. Instead of solving puzzles and finding items to woo the lovely ladies, you need to lie to them, do something to impress them, and/or get them drunk, which has slightly more unpleasant undertones. All the while, you need to keep your “confidence” meter up, while imbibing enough alcohol without getting completely drunk. Getting totally wasted allows you to go streaking, which can increase your confidence if you “win”, but can also screw up your performance in some of the minigames. Throughout the game, you can also get cash by taking pictures, which can be used to purchase new outfits and other random stuff. You can also fart on pretty much anything, if you are so inclined.

The first step to get with a lady is to chat them up. Apparently the designers felt that their intended audience just wouldn’t “get” dialogue trees, so instead you’re presented with an interactive minigame where you need to navigate a sperm through a series of obstacles. If you manage to hit the heart icons, Larry will come up with some particularly compelling pick-up lines, but you hit the other icons, he’ll say something stupid. Some of these segments are actually funny, just to hear some of the ridiculous things he comes up with, but there aren’t any subtitles, and hitting some of the wrong icons will trigger burping and farting noises that tend to drown out the dialogue. 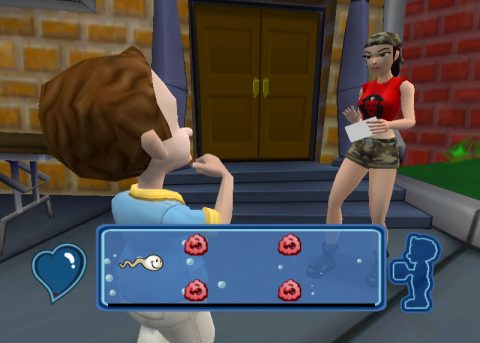 From there, conquering different girls require different minigames. For some, you’ll need to play a game of quarters, the classic drinking game, which here is really awkwardly implemented. Sometimes you’ll need to run around the area, collecting trinkets within a certain amount time while avoiding obstacles. Some are simple “push-the-buttons” style reaction games, while you’re dancing or jumping on trampolines, or putting on makeup, or engaging in weirdly kinky foreplay. There’s one where you participate in wet t-shirt contest and soak girls with a water gun, as well as a rip-off of the arcade game Tapper. You’ll usually need to play a handful of these before “winning” the girl, which gives you a quick cutscene and a token of affection. Collect enough and new areas of the campus open up, allowing you to find more girls. Of course, none of these minigames are actually any fun, and the slow, numerous loading screens just add to the aggravation. As a concession, as you proceed through the game, you can unlock new loading screens, including raunchier pictures of the main girls, or real human models dressed vaguely like the characters. (The latter seems like it was an excuse for the development team to hire a bunch of naked woman to pose in their studio.)

Compared to the previous Larry games, where the number of available woman tended to top out at around half a dozen, there are 16 different girls to hook up with. These include Sallie Mae, the country music loving cowgirl; Ione, the shy, bookish type who later unleashes a completely different wild side; Charlotte, the rather militant hippie-ish activist; Harriet, the crazy band camp girl; Analisa, the mob boss daughter straight out of New Jersey; Luba, the massive campus slut (who also showed up in Playboy magazine during one of their “girls of gaming” pictorials); Barbara Jo, the cheerleader; Beatrice, the smart girl scientist; Tilly, the snotty British girl who also heads the sorority; Morgan, the nerdy computer loving, MMORPG playing chick; Bilzarbra, the African-American waitress and aspiring actress; Uma, the bitchy talk show host; and Suzi, the punk rocker girl. There are also a couple of girls, like Zanna, the hugely built Russian spy; Sweet Lou, the fat, aging convenience store worker; Koko, the mime with a hidden secret; and Zena, the stripper who you can’t actually “win”. Indeed, they seemed to have covered the gamut of usual stereotypes. Amidst all of the girls include a bunch of other wacky characters including The Commissar, a crazy hobo; the nefarious Dean Abrahmson, stolen from every college movie spanning from Animal House forward; the Porn Fairy, patterned after Ron Jeremy; and a talking, masturbating monkey. 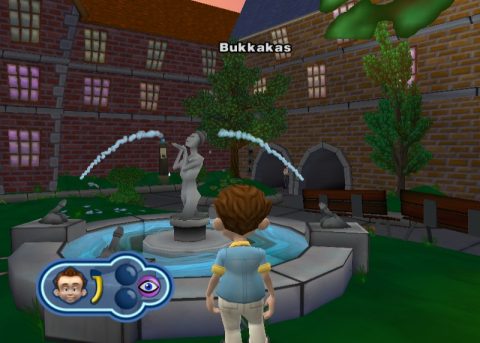 While the actual game is completely dull, at least it’s still pretty funny, even if the humor is a little bit more mean-spirited and vulgar than even the previous games, with quite a bit more profanity, since it’s more aimed towards the American Pie crowd. There’s a fountain on school grounds honoring the goddess Bukkakis, who is surrounded by four phallic spouts shooting water at her face. There’s something amusing about flirting with the geek chick and suggesting that you go on a date by slaying rats in the library basement. Some of the other conversations get bizarrely surreal, especially with the aforementioned monkey, or with a sentient arcade cabinet that taunts Larry. In Larry’s room, you’ll even find his computer showing off screens from the mystical Leisure Suit Larry 4: The Missing Floppies (“the best game of its time”), which at least shows that someone of the development team was familiar with the legacy. You can also find hidden tokens which look like the “Where’s Dildo?” icons from Love for Sail.

Still, it really seems lacking in certain areas, especially when you conquer the girls. When you win Sallie Mae, she sees that you’re not circumcised… and then leaves, as if the very concept of a Jewish cowgirl was hilarious. When you win Analisa, you hear the radio of her mob boss father calling a hit on you, and you high tail it. When you win Luba, you inadvertently find yourself in the middle of a potential orgy and then bail out. When you win Ione, she insists that you wear a strap-on, since she’s saving her virtue for a real man. (Okay, that part is kinda chuckle worthy.) Larry copes with this by strapping it on to one of her teddy bears and switching places while in the dark, which veers into the creepy side. Compared to the previous games, these just aren’t funny, especially since half of them just consist of Larry getting weirded out and running away. You get “real” sex scenes with a handful of girls at the end of the game, but those really aren’t funny either. 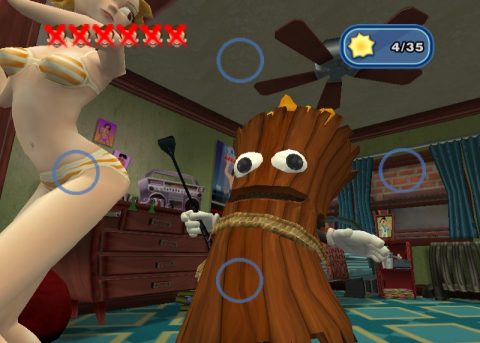 In the North American release, the game censors all lower body nudity with a little bar. It’s easy to remove these with a quick hack in the PC version, or with an Action Replay for the PS2 version. (It’s actually funny that this game never caused a controversy a la Hot Coffee in Grand Theft Auto: San Andreas… especially considering the code is built in as a default with the Action Replay!) However, the cutscenes are still censored, since they’re prerendered movie files. It was released in Europe fully uncut, and an Adults Only rated version was released worldwide via digital distribution. It’s actually surprising how much detail was put in the character models, with various girls sporting different pubic hair styles to fit their personality, even if though it looks like they were just drawn on with MS Paint’s “spray” function. Even scarier is the amount of detail they put into Sweet Lou, complete with hugely sagging boobs and stretch marks.