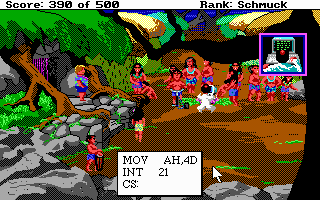 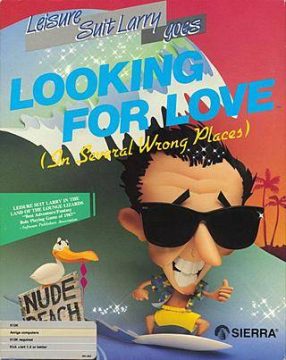 At the beginning of Leisure Suit Larry goes Looking for Love (In Several Wrong Places) (hereby known simply as Larry 2), we find our hero mowing the lawn of Eve, his conquest from the end of the first game, implying that the two had found their own little happily ever after. That is, until Eve pulls into the driveway with only the vaguest recollection of who this fat, balding wiener is. We learn that Larry has been a bit hung up on her, having not realized that their tryst was little more than a one night stand.

Distraught, Larry wanders off and manages to both win the lottery and a free cruise, the latter for having accidentally participated in a lousy dating show. During his trip to the boat, Larry accidentally gets involved with an international espionage incident, causing him to be trailed by KGB agents at every corner. After come crazy hijinx, Larry ends up on a tropical island, complete with a nude beach. After making his way to the airport, Larry once again runs into trouble and ends up on Nontoonyt Island, ruled by the evil Dr. Nonookee, who’s enslaved the local native villagers and has generally been doing nasty things to their ecosystem. Only Larry can bungle his way into his fortress, put a stop to this madness, and win the heart of Kalalau, the beautiful daughter of the village tribe chief. 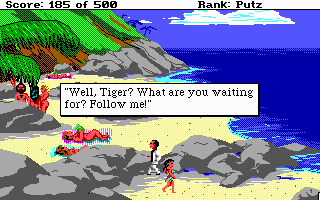 Larry 2 runs on the SCI0 engine, featuring higher resolution 16-color EGA graphics and a mouse-based interface for movement, although it still uses a text input parser for all other actions. The engine also supports FM and General MIDI music, although it’s barely used outside of the extended Larry theme played in the opening credits, and the little jingle whenever you solve a puzzle. The original AGI-based Larry game was too primitive to show detailed characters, but the box artwork for these games always portrayed Larry with a cartoonish look. Here, Larry is drawn in a relatively realistic manner, and it’s actually pretty scary! He’d previously been shown as being a bit of a lovable loser, but here he actually looks like a balding creep. There’s also a “trite phrase” function, which lets you type in your own personalized saying, which is then repeated several times throughout the adventure. (The default is “Have a nice day.”)

Compared to the first Leisure Suit Larry, there’s a bit more actual adventuring going on, instead of just running around a single city. It’s a much more ambitious game, but it’s also completely littered with design issues. For starters, once you win your prizes, you have a limited amount of time to crawl around the town, shop for a few essential items, and get on the boat. If you take too long, the boat leaves and you lose. If you forget to buy a certain item, you’ll find yourself stuck in the next segment. Once you get on the boat, it gets even more frustrating. What you don’t know is that you’re in a timer here, too – if you’re not quick enough, you get raped to death by the S&M loving fat woman next door. Until you die, there’s no indication of this time limit, or even how long it is, essentially requiring you to replay the whole segment, potentially multiple times.

In order to avoid this, you need to grab a lifeboat and abandon ship. During this scene, you’re stranded out at sea for ten days, requiring that you use certain items to survive. For example, you need to don a wig to absorb the sun rays. The problem is, you can’t actually use them when you’re floating on the lifeboat – the game simply won’t accept any text input, leaving our hero to simply perish helplessly. You’re supposed to equip them in the short segment right after you leave the ship, but before you drift away from the cruise liner. How were you supposed to know that this is the only screen where you can use these items, much less know which items to use to begin with, without dying first? You also need to throw away the spinach dip from the restaurant, if you grabbed it. If not, Larry will automatically eat it when he gets hungry and dies of food poisoning. (You don’t need to pick it up to begin with, but the whole process adds some extra points.) It’s ridiculous.

Later on, you get stuck on an airplane. You’re supposed to get up, get to the emergency exit, and parachute out (assuming you remembered to buy the “insurance” at the airport, which is actually a parachute – if didn’t, you’re out of luck.) If you stand up from your seat, two stewardesses with drink carts immediately block your exit. To get around them, you have to give a pamphlet (which you hopefully picked up from the airport) to your chatty seatmate. This triggers the disappearance of the stewardesses. How are these events even related?

Now, whenever you die, the Game Over screen gives you an option to order a hint book, giving you the number for Sierra’s order hotline. Yeah, that’s a bit of self-acknowledging humor, but in this case, it’s a bit rude! Certainly there are those who attribute these games’ difficulty to the need to sell guides, but there’s a fine line between obtuse puzzles, and situations so annoyingly designed that a walkthrough is practically a necessity.

But the ultimate slap in the face is right at the end of the game. You need to make a homemade Molotov cocktail and drop it into the core of a volcano to blow up Dr. Nonookee’s lair. (Hopefully you brought the barf bag from the airplane, and the bottle from the hairdresser in the airport, and the matches from the hotel… it’s belaboring the point, but without any of these items, you can’t win the game at all.) Anyway, if you type “PUT BAG IN BOTTLE”, Larry will immediately drop it into the hole without lighting it, causing you to lose. This is due to a glitch in the game code, as it misinterprets the word “bag” as a verb. As a result, you need to play around with the text inputs to get it recognized properly. For example, you can type “PUT THE BAG IN THE BOTTLE”, sticking the definite articles in there, which results in Larry holding the bottle over the hole, giving you time to light and drop it. This wasn’t intentional – apparently it was introduced right before the game shipped and wasn’t caught during testing – but it’s a rough cap to an already brutally frustrating exercise. 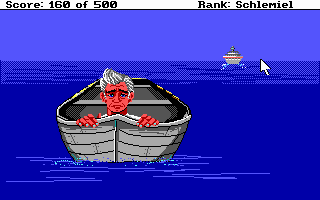 When divorced from its vexing design, Larry 2 is actually a pretty funny game. The situations Larry finds himself in are gleefully absurd, especially when you need to disguise yourself in drag (in a bikini, complete with a full body wax) to fool KGB agents. At one point, you need to monitor an x-ray at an airport, and watch some goofy stuff show up on the scanner, including a cat in a cat-shaped suitcase. The funniest moment is when Chief Kennywauwau of the native tribe issues a challenge to Larry – in order to win the hand of his daughter Kalalau, he needs to write a program, any program… in assembly language. (Since you’re in the middle of a jungle, the computer is powered by a native riding a bicycle.) Sadly, this all occurs in a non-interactive cutscenes and isn’t an actual puzzle. There’s also a strange running gag involving Larry’s failed quest to fix his baldness, and there are no less than five (identical looking) barber shops throughout the whole adventure.

Compared to the first game, this entry is significantly less raunchy, and the age verification quiz is gone. There’s still some pixellated nudity, particularly on the native tribeswoman, but otherwise you’re actively punished for trying to hit on girls. In addition to the fat woman on the ship, there are two separate undercover agents who, if propositioned, will fly Larry to a fortress, cut him in half with a laser, and dip his remains in boiling acid. If you romance the maid at the hotel, you’ll end up shot to death by her militant brother. The only woman you DO get to cavort with is Kalalau, in an oddly sweet epilogue. You’ll also note that there are no full screen close-ups of any of the women, just small portraits when you look at them. These same portraits also show up in the manual and act as copy protection. One of these girls is actually Rosella from King’s Quest IV, in one of Sierra’s many cross promotions. The ending also features a blonde woman named “Polyester Patty”, who would receive a dye job and a name change to “Passionate Patty” for the next two sequels.