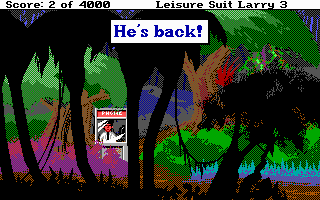 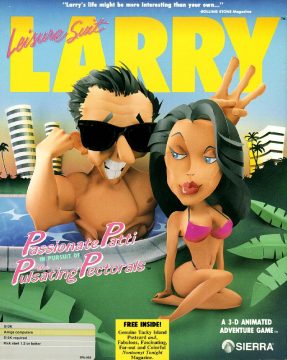 Leisure Suit Larry 3 starts on Nontoonyt Island, which has since turned into a yuppie tourist paradise after Larry killed off the evil Dr. Nonookee. His wedding to Kalalau hasn’t exactly gone well though, with her having left him for another woman. Furthermore, since his wife was the only reason he had a job – Kalalau’s daddy has since become a property mogul – Larry finds himself literally tossed out into the streets. With this news, Larry ditches his Hawaiian shirt for his classic leisure suit (complete with a Superman-style transformation in a phone booth) and sets off to conquer more babes. 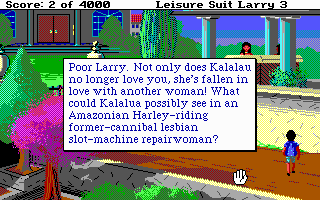 You’re free to explore almost the entire island at the beginning, but much like the first Leisure Suit Larry, each of the women must be conquered in a specific order. Faithful fans will remember that there were three girls in Larry’s first quest – the hooker, who didn’t count; the blond girl at the disco, who tied up Larry and took his cash; and Eve, who marked the end of the game. Here, Larry is significantly luckier with each of the women – he just gets interrupted by a variety of increasingly ludicrous situations.

As the game suggests, the ultimate goal is hooking up with Passionate Patti, a high class jazz pianist. Unfortunately, you’re flabby, out of shape, and still technically married – you need to buff up and show your divorce papers in order for her to take you seriously. The only way to Patti’s heart is, strangely enough, by hooking up with some of the other women around the island, which leads to the path of self-improvement.

Larry’s adventure truly begins with the seduction of Tawni, a blonde babe sunbathing topless on the beach, who’s a bit more interested in the touristy junk hawked by the natives than Larry’s lovemaking. This setback eventually leads Larry to the dancer, Cherri Tart. Some backstage mishaps result in Larry wearing the dancer’s gear and being forced to perform on stage, which in turn accidentally gets him into the skirt of his overly friendly divorce lawyer Suzi Cheatum. After pumping some iron to impress Bambi, the local gymnast, Larry is finally able to woo Patti. They rock each other’s world, and for the first time in the game, things actually don’t seem to be going horribly wrong. That is, until Patti unconsciously mumbles the name of her boyfriend, whom she intends to break up with after meeting Larry. Misunderstanding the situation, Larry seeks solitude by adventuring into the island’s uncharted (and terribly dangerous) bamboo forest. From here, the viewpoint changes to Patti’s perspective, as she wanders off in the morning to reclaim her lost lover. 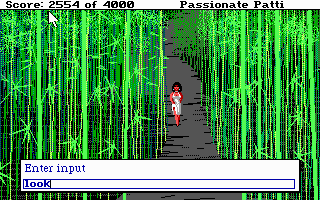 The whole scenario is also a bit silly. It makes sense that Larry would immediately fall in love with any woman that would give him the time of day, because he’s more or less pathetic, but how does a woman like Patti become so infatuated with him, enough to risk her life? (Apparently it’s the “pulsating pectorals” that Larry earned earlier in the game.) But that’s also why it’s funny, because the game is cheekily self aware, and doesn’t try to pass it off as anything more than goofy fun, with maybe just a bit of heart.

The title gives the impression that the game was developed for both men and women, in hopes that they’d maybe attract some girls into the fold too. Patti isn’t nearly the desperate loser that Larry is – the game heavily implies she’s been around the block quite a bit, as evidenced by the many innuendos. (When picking up some coconuts, the narrator announces, “You grab a pair of the hairy brown nuts… a feeling not wholly unfamiliar to you!” which turns into a running gag.) Alas, it doesn’t quite work like that – Patti isn’t so much a sexy, empowered female so much as a perverted old man’s version of a sexy, empowered female. Like the first game, a lot of the fun comes from using the text parser in creative ways to really slut it up. (Try giving blowjobs to random guys, for example.)

Patti’s segment of the game is, unfortunately, much shorter than Larry’s. It’s also much more traditionally structured, as the only real thing to do is explore the Bamboo Forest until you find Larry. You can enter the male strip club and chat up one of the dancers, who’s featured in a close-up much like Larry’s potential mates, but it feels way more humorous than sexy, and you can’t really go after him anyway. Unfortunately, almost all of the puzzles require that you’ve picked up all of the necessary items at the hotel, and if you miss even a single one… well, you can’t go back once you’ve entered the jungle.

Most of Patti’s quest revolves around using various bits of her clothing to survive (using her bra to toss coconuts, ripping her dress to use as a harness to climb across a rope, etc.) Before you can get into any of this, though, you need to navigate the bamboo maze itself. This initially seems quite aggravating, because you’re also under a strict time limit, but the solution is hidden in the manual, if you look close enough. There’s also a log ride that plays as an arcade sequence, but the window is incredibly tiny, so thankfully there’s an option to skip it. 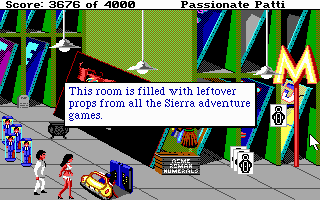 Once Patti meets up with Larry, things quickly spiral out of control when they are kidnapped by lesbian cannibals. If you managed to grab the “magic” marker back from Patti’s piano, you draw a Looney Tunes-style portal which somehow warps you to Sierra Studios, where various games are being “directed” like movies. The whole ending is similar to the fourth wall breaking ending from Blazing Saddles. You end up destroying the set of Police Quest, somehow wander into the first screen of Space Quest II (complete with an anti-gravity magnet which sends you flying around the screen) and walk into Roberta Williams directing the whale escape scene from King’s Quest IV. From here, Larry is offered a job telling his life stories through computer games, and the series comes in full circle. This might seem all really odd, but this kind of self-referential humor was not entirely uncommon in Sierra games, particularly in Space Quest III, where the final goal is to rescue the series’ real life creators from software pirates.

Leisure Suit Larry 3 runs on Sierra’s SCI0 interpreter, so it looks and plays much like Larry 2, although there’s more music this time around. Thankfully, they ditched the realistic looking Larry in favor of a cartoonier one. Although Patti gets a glamorous, realistic close-up when you first meet her, she too is portrayed in a sillier fashion during her death scenes. (There’s actually an amusing anti-drug message, where you meet an untimely death if you decide to smoke some weed. Between this, the hooker from the first game, and the magic mushrooms from the Quest for Glory games, it’s nice to see Sierra doing a public service!)

Although there are quiz questions at the beginning of the game, you can still play even if you can’t answer of them. Instead, your proficiency in trivia adjusts the game’s “filth level” from a scale of 1 to 5. One of the first things you can do is look through a set of binoculars and peep on a woman undressing. At the lowest filth level, she closes all of the shades. As the filth level gets higher, she closes less and less, until you can see her 16 color breasts in full glory. The sex scenes don’t have the “censored” bar over them like LSL1, but the participants are either clothed or hidden, so it’s not terribly explicit. If anything, there’s a whole lot more man nudity, thanks to the section where you work out in the gym. It’s funny, because it’s obviously there to appease the female gamers who were lured in with the whole “Passionate Patti” thing. Equal rights are good, one supposes. But really, Mr. Lowe, did you guys need to position the camera in the shower directly in the floor, so it’s pointing right up at Larry’s bare crotch?

At any rate, the third Leisure Suit Larry game is a fine product. Larry’s segment is at least as long as the first game by itself, although it feels shorter because there’s less time spent gambling or traveling in the taxi. Patti’s segment could’ve been longer, but the change in perspective is refreshing, if nothing else. As such, this is one of the most rounded entries in the series.